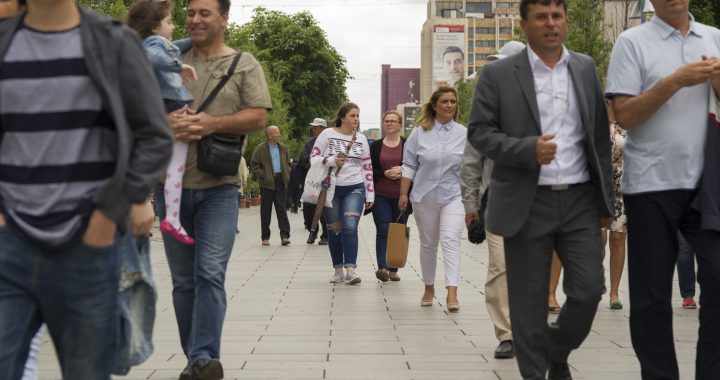 The best way to deal with racism in Kosovo is to center the dialogue on Kosovo’s own racialized minorities. Treatment of foreigners of color can be part of the conversation without dominating it.

The summer of 2015 was the first time I came to Kosovo. I was 18 and it was my first time leaving the United States. It was also a time when I was still figuring out my own identity. As a young Afro-Latina woman, it seemed the politics of my identity always came up. To top it all off, I had converted to Islam a year prior, which added to my confusion.

Upon arriving in Kosovo I immediately became keenly aware of my hyper-visibility. My hair, nose, lips and body structure were very different from the Kosovar women I encountered. For many, I was the first black woman they had ever met in real life. I constantly received compliments on my black features. This was especially strange for me because I come from a culture where my features are considered ugly.

My experience with street harassment in Kosovo also has very gendered and racial aspects. The street harassment in Kosovo is brutal for most women, regardless of ethnic background, but my blackness adds another layer to that. Men would often follow me and scream the names of random black female celebrities. I got used to hearing, “Beyonce! Rihanna!” when I walked by groups of men. Once a car full of men started yelling, “baby mama drama!” at me, referring to an American stereotype about black female promiscuity. This stereotype, which Kosovars in the car might have not even known, plays on the trope of the black woman who has many kids from many different fathers and spends her time constantly chasing after the different fathers and causing “drama.”

After my first trip to Kosovo in 2015 I made the personal decision to abide by Islamic dress code guidelines, which includes the headscarf. For me, it was a way to reclaim my body from the male gaze. In January of this year, I returned to Kosovo. I hoped that my new way of dressing would be a deterrent from street harassment.  This turned out to be completely untrue. Admittedly, the harassment is much less than it was in 2015.  However, men on the street are still just as bold. Now I get catcalled with Islamic phrases like “Selam alejkum” and “Mashallah.”  I have had men ask me for coffee and refuse to take “no” for an answer.  I have also had people follow me home on more than one occasion.

The fascination with black womanhood is reflected in a lot of popular Kosovar music. In her videos, Era Istrefi often wears black hairstyles such as dreads and box braids. Her music and dance-style emulates black musicians and many even call her the Albanian Rihanna. In the United States, the sight of a white woman imitating black womanhood would bring accusations of cultural appropriation. However, cultural appropriation is a question of privilege. Privilege is a result of social inequality and is based on historical and systematic oppressions that favor certain groups over others. When a privileged group appropriates the culture of an underprivileged group, it reduces the underprivileged group to harmful stereotypes and further reinforces their marginalized status.

In the United States, discussions about privilege and cultural appropriation usually fall into a white/person-of-color (POC) binary. The colonialist and imperialist tendencies of white European nations have primarily targeted non-white populations. Thus, in the United States and Western Europe we talk about white people being more privileged than people-of-color (non-white people). Albanians complicate this binary to a considerable extent because although they are white Europeans, they do not have an extensive history of dominating other cultures. In fact, they have been victims of imperialist and colonial forces that we usually ascribe to Europeans.

Additionally, Albanians have suffered from similar systematic discrimination that many other non-white populations faced. In Yugoslavia, they became a racialized other because they lacked Slavic origins. In the ‘90s Albanians faced systematic discrimination that excluded them from jobs, schools and government. They were victims of police brutality and mass ethnic cleansing. With this history of victimization, I find it wholly unproductive to use the white/POC binary to ascribe privilege onto Albanians in Kosovo because I do not actually believe it exists. In fact, being an American makes me more privileged than Kosovars in a lot of ways. Within Kosovo, I have access to many jobs and institutions by virtue of my nationality. I also have the ability to travel freely thanks to my American passport.

This brings me back to my original question: how do I critique Kosovar Albanian artists and musicians who absorb aspects of black culture into their work? I believe Kosovar Albanians who have lived abroad have the responsibility to educate those who have not. They have had the opportunity to live in diverse society and it is essential that they bring their experiences back to Kosovo. As Kosovo grows as a country and further integrates into Europe, it will need to have the capacity to handle diversity. Having discussions about how Kosovars interact with other cultures will become increasingly important.

However, I think the best way to deal with problematic racial notions in Kosovo is to start with a population that Kosovar Albanians are much more familiar with, the Roma. Roma are discriminated against in every facet of Kosovar society and racism against them is open and normalized. Centering dialogues about race and racism in Kosovo on foreign people of color is wholly unproductive and deeply problematic. The treatment of foreigners of color can be part of the dialogue without dominating it. Contextualizing racism in this way will lay the foundation for broader discussions about race and foreigners. I think first and foremost an internal conversation needs to be started between civil society organizations, activists, and the Kosovo government. Additionally, the international community in Kosovo needs to make this conversation a priority. Any discussions on race in Kosovo that do not focus on racialized minorities who actually live in Kosovo will never come to fruition.