A romantic & remote getaway on the shores of Komani lake

Relax on one of Europe’s most beautiful ferry rides and unwind at one of the continent’s most remote guest houses.

The streets of Prishtina are starting to empty, part of the annual summertime migration to the seaside. If sand, surf, and crowds are not your thing, but you still want to cool off in a lounge chair – or better yet a kayak – Komani Lake is well worth a visit. It is great for a day trip, but once you’re there you’ll definitely want to stay awhile.

From Prishtina, it’s a three and a half hour drive to the port village of Fierza, where the majestic Komani lake begins. The lake is artificial: what used to be a mountain valley was dammed in the 1970s. This is what gives it its unique sylvan surroundings. 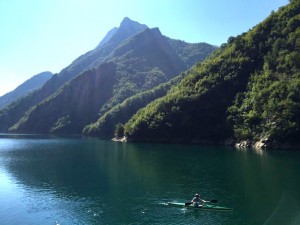 In Fierza, there are several ferry boats options, from the bigger car ferries to the Dragobia, a bus converted for use in the water. After two and a half to three hours, the bigger boats deposit you in Komani, an hour’s drive from the rambunctious bicycling city of Shkodra, which makes a great starting point for tours of lake Shkodra (also called Lake Skadar in Montenegrin). No matter which ferry you pick, the boat ride itself is pure joy. The view of the mountain gorges and some of the surrounding habitations is breathtaking and awe-inspiring. 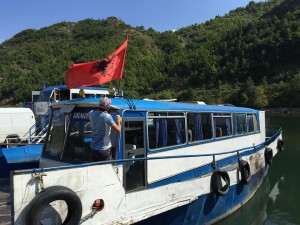 A ferry converted from an old bus. Photo: Valerie Hopkins.

My favorite option is to let Mario Molla take you home. Shortly after the lake was dammed, Mario’s father dynamited a sliver of mountain on an inlet in the lake and built a small home and eventually a more stately stone home just above it. This year they’ve added a second guesthouse that can accommodate ten guests, and I highly recommend visiting it.

I think it could be one of the most remote parts of Europe: there is no cell phone network and no electricity (though there is a generator that can be turned on for a few hours in the evening).

It is a great place to go with a group of friends, and if you go with a significant other be prepared for the joy of a fireplace and the romantic glow cast by the oil lamps in use at night. 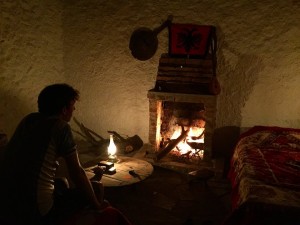 You won’t think of Pokemon Go or dream of checking Facebook when you’re laying in the hammock in the evening staring up at the most stars you will have ever seen in your life.

During the day, you have time to chill in the lounge chairs on the large sandy beach-like area and cool off with a swim in the azure water. Across from the guesthouse there is a beautiful lump of rock that looks kind of like an ancient Mayan pyramid.  You can explore the area around the house by kayak, or you can use one of the provided scythes to hack a forest trail. The closest neighbor is a two-hour hike, I was told. 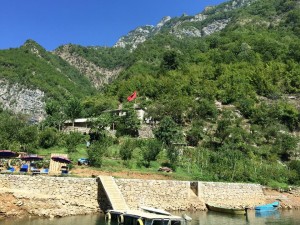 The area consists of a main house, where Mario and his extended family live, including his mother who is always working, whether it is milking the cows, feeding the pigs, or working in the garden that provides almost all of the food and beverage served at the house. Oh yeah, that’s the best part: the entire compound is just teeming with fruits. Grapes hang from all angles and figs fall right into your mouth.

The rest of the food couldn’t get any more local. Everything I ate and drank during my weekend there was made on the premises, except for some cured meat, which came from the closest neighbor. Cheese, wine, rakia, grapes so sweet they taste like candy, and of course flia and yoghurt were all on the menu. 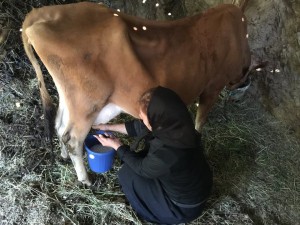 If you’re coming from Prishtina, the best way to reach Fierza is by cycling 50k from Gjakova at a perfect speed to admire the old stone houses and livestock and to gaze at the nearby Valbona National Park. Otherwise, you can drive or do an organized tour.

There are some day-long tours which include transport from Prishtina, a ride to Mario’s guest house, where lunch will be prepared, and then an immediate return to the city.

The ferry ride is ten euros a person and a night in the guest house with meals is 40 to 50 euros per person.

This is a great weekend trip away from Prishtina, or something to include in a larger northern Albania journey.

You won’t want to look away from the surroundings on the lake, but make sure you pack a good book just in case!

Kosovo Olympic Team off to Rio 2016

by Atdhe Mulla
Next: Features