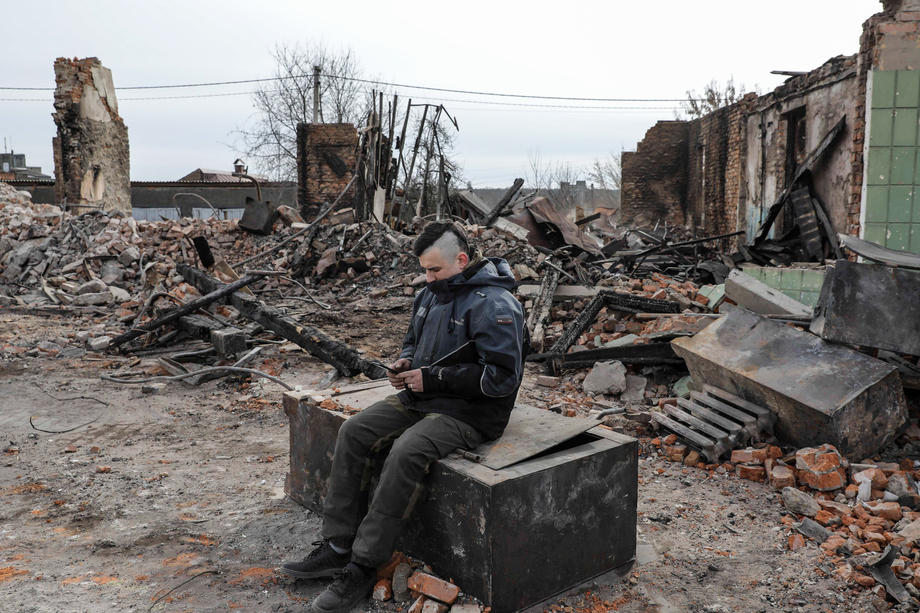 A man sits near a destroyed house near the Rus Orthodox Foreign Church partially destroyed after being bombed by Russian aircrafts, in Malyn, Ukraine, 12 March 2022. Russian troops entered Ukraine on 24 February prompting the country's president to declare martial law and triggering a series of announcements by Western countries to impose severe economic sanctions on Russia. EPA-EFE/MIGUEL A. LOPES

Russian Aggression in Ukraine: This is How Bad Things Could Get

Russia is expanding its bombing in Ukraine to the west and deploying its artillery for intensified barrages on Kyiv. Poland is reaching the limits of its capacity to take in refugees. So are other near neighbors. Moscow is accusing the US of supporting biological and chemical warfare research in Ukraine. Russian forces have already taken control of several nuclear power plants. Moscow has also thrown a monkey wrench into negotiations on re-entry of the US into the Iran nuclear deal.

How bad could things get?

Pretty bad. Here are some guesses:

All the while, Russia will continue to attack population centers, medical facilities, and schools throughout Ukraine. This “Grozny” strategy is a war crime, but then so is the war of aggression Moscow launched without provocation.

The NATO Alliance meanwhile continues sitting on its military hands while Russia crosses multiple red lines. The EU and US are imposing more sanctions on trade and investment, but those rarely if ever change an aggressor’s mind quickly. You are far more likely to get what you want from them when you negotiate lifting them rather than when you impose them. The day when that might be possible is far off.

Military responses have been ruled out

President Biden has so far prioritized prevention of a wider war. He has repeatedly emphasized that Americans will not fight in Ukraine. The Pentagon has apparently blocked transfer of military aircraft from Poland to Ukraine on grounds that might cause Russia to attack Poland and trigger NATO’s mutual defense commitment. The US can’t send the best air defense systems because they require trained personnel that Ukraine doesn’t have and can’t produce in short order.

The Americans and other NATO allies are sending massive arms shipments to the Ukrainians, whose commitment to fighting for themselves should not be doubted. But it may not suffice. Ultimately, Russia has resources, technology, manpower, and immorality that Ukraine cannot equal. We are all likely to suffer the consequences