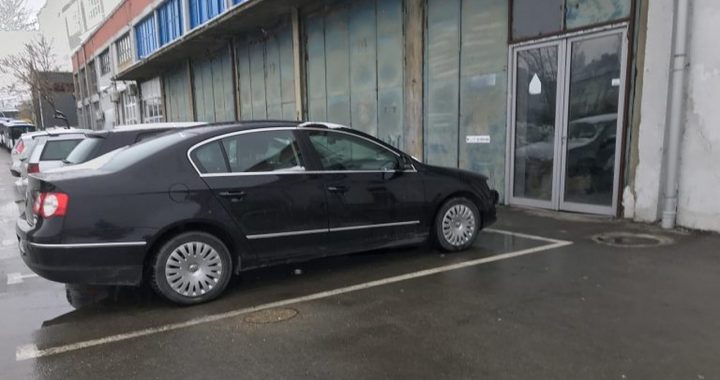 A car owned by public company Trafiku Urban, previously owned by the chairman of its board of directors. Photo: BIRN

Kosovo Police arrested four officials from public company Trafiku Urban on suspicion of manipulating a public tender to purchase a car from the company’s chairman – a case that BIRN highlighted last year.

Three officials from public company Trafiku Urban and a car salesperson were held by police in Pristina on Monday evening over an alleged public tender scam.

Kosovo Police arrested Ruhan Beha, former chairman of the board of directors the Trafiku Urban public company, Lulzim Rexhepaj, its former chief executive, Florent Tahiraj, its former secretary, and a person only identified as V.K.., a manager of a car dealership.

Police said the four suspects “managed, via agreement and coordination among one another, to sell a car owned by the chairman [of the board of directors] in an auto showroom and then, via tender procedures, to buy the same [car] for the needs of the Trafiku Urban public enterprise, paying thousands of euros more than the real value”.

The suspects are accused of abuse of office and authority, involvement in a conflict of interest, and aiding and abetting the crime. Beha and Rexhepaj were remanded in custody for 48 hours while the two others were released.

The arrests came almost a year after BIRN reported on the alleged misuse of a public tender which led to Trafiku Urban purchasing Beha’s car at a price that was thousands of euros higher than the market rate.

An investigation broadcast by BIRN’s ‘Kallxo Pernime’ programme in April 2021 revealed the details of the tender for the indirect purchase of the personal vehicle of the former chairman of the board of directors at a price twice as high as the market rate.

BIRN journalist Valon Fana described how the VW Passat car was owned by Beha from April 29, 2015, until June 25, 2019, when the car had passed into the ownership of an auto dealership in Pristina.

According to the Kosovo Civil Registry Agency, one day later the car was registered under the ownership of Trafiku Urban.

Trafiku Urban paid 13,390 euros for the car, but the enterprise’s auditor estimated the market value to be between 6,500 and 7,500 euros.