Glorified and Vilified: Who Was Kosovo’s Nazi Ally, Xhafer Deva?

A row over Kosovo’s renovation of the former house of Xhafer Deva, who was interior minister in a Nazi-allied government in Albania, has highlighted deeper disputes among Albanians about World War II history.

There are cracks in the walls and almost nothing inside the rooms of the building that has become known to the public as ‘Xhafer Deva’s house’ in the northern Kosovo town of Mitrovica.

In recent weeks, 118 years after Deva was born in the house, it has become the focus of controversy as a row erupted over whether its former inhabitant, who collaborated with the Nazis during World War II, was a hero or a villain, and whether the building should be renovated.

The house was first rebuilt in 1930, but in 1946 it was confiscated by the Yugoslav Communist regime and after then it served as a storehouse and health centre until 1999, when displaced people were settled there.

Valdet Deva, one of Xhafer Deva’s descendants, had never felt any particular disdain or approval for his family until January this year, when Kosovo’s Ministry of Culture, under a project supported by the European Union Office in Kosovo and the UN Development Program, decided to renovate the house and use it as a cultural centre.

Deva, who served as Minister of Internal Affairs of Albania during 1943 to 1944, when the country was under the control of Adolf Hitler’s Nazi regime, quickly became headline news in the Balkans.

The plan to renovate Deva’s old home caused waves of controversy in Kosovo, Albania and further afield, with some labelling him a Nazi collaborator and others defending him as a champion of the Albanian cause and a saviour of Jews.

The German ambassador to Pristina, Joern Rohde, was one of the first to deliver his criticism. “Very concerned about restoration plans for Xhafer Deva’s house, a known Nazi collaborator and protagonist of infamous SS Skanderbeg Division,” Rohde wrote on Twitter.

“Don’t distort the truth about the Holocaust or war crimes committed by the Nazis and local collaborators,” Rohde urged.

Valdet Deva, who lives in Sweden, said that he had expected reactions for and against the renovation because Albanian society remains divided on some issues from its history.

Some Albanians like him, particularly on the political right, deny that Xhafer Deva persecuted Jews. They insist that he only collaborated with the German Nazi regime in order to help defeat the Communist Partisans and ensure that Albania and Kosovo were unified and not part of a Serb-dominated Yugoslav state.

“Nobody can prove claims that Xhafer Deva allegedly helped the deportation of Jews from Kosovo,” Valdet Deva insisted.

“Deva strongly believed that the Germans would return to normality on the Albanian issue [support the unification of Kosovo and other areas with Albania] and he was a collaborator with the Germans exclusively for the interests of the Albanian nation,” Buxhovi argued.

“We should not condemn him… There are historical facts that Deva not only prevented Jews from being deported but also protected them,” he added.

But Paskal Milo, a historian from Tirana and a prominent figure in left-wing politics in Albania, described Deva as “one of the most compromised pro-Nazi figures among Albanians”.

“As minister of internal affairs, he was the main person responsible for all Albanian gendarme forces who openly collaborated with German occupying forces from November 1943 to June 1944 against Albanian partisans and anti-fascists,” Milo told BIRN.

He explained that the Albanian State Archive has hundreds of documents which prove Deva’s “criminal activity against anti-fascists and innocent civilians in Tirana”.

“He was the organiser and direct executor of the February 4, 1944 massacre of anti-fascists and residents of Tirana,” he said.

“Nazi documents show that he was Nazi collaborator not only for their generals in Albania but also for Hitler’s special envoy for south-east Europe, Herman Neubacher,” he added. Born in Mitrovica in Kosovo when it was still part of the Ottoman Empire, Xhafet Deva studied at an American college in Istanbul and in Vienna. He returned to Mitrovica in the 1930s, worked an entrepreneur, and in 1943, after the capitulation of Italy in the war, he became interior minister of Albania in a government loyal to Nazi Germany.

Efraim Zuroff, director of the Nazi-hunting Simon Wiesenthal Centre in Jerusalem, has claimed that Deva was a “symbol” of the Albanian wartime regime’s collaboration with the Nazis and of crimes committed against Jews and Serbs, and said it was inappropriate to turned his former home into a cultural centre.

But Valdet Deva said he is sceptical. “As a family, we have requested facts [to substantiate] the Simon Wiesenthal Centre and Zuroff’s claims, but they haven’t provided a single fact so far,” he insisted.

“We have testimonies from Holocaust survivors about the help and humanism he showed to Jews,” he added.

Stevan Radojkovic, a historical researcher from Belgrade, said that disputes over figures like Deva show how divided people in the Balkans are about their shared history, but argued that archive materials show that he did assist in the Nazis’ persecution of Jews during the Holocaust.

“A document from the Yugoslav State Committee for determination of crimes committed by Nazis and their collaborators says that when the Germans entered Mitrovica in April 1941, Deva ordered the confiscation of the Jews’ assets,” Radojkovic told BIRN. 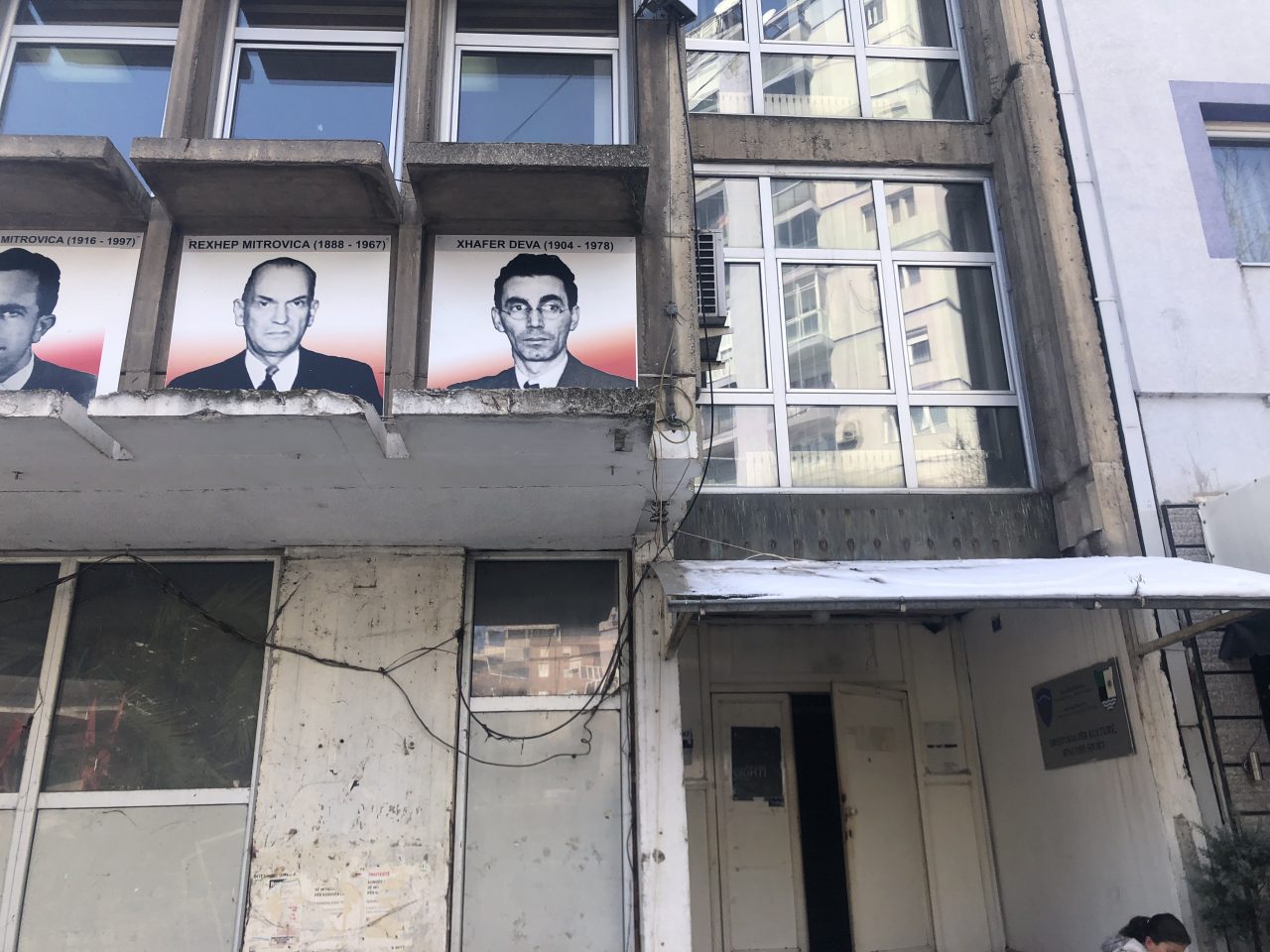 A picture of Xhafer Deva alongside other famous former residents of Mitrovica. Photo: Serbeze Haxhiaj/BIRN.

Noel Malcolm, professor of history at Oxford University, wrote in his book Kosovo: A Short History that Deva was frequently alleged to have worked for German intelligence for some time before World War II.

Malcolm said that Deva was a “most trusted servant” of the German regime, and that the Tirana government in which he served was “carefully selected and controlled by the German authorities”, who were “using the rhetoric of Albanian nationalism” to gain the sympathy of the local population.

When Deva arrived in Tirana, “he began to recruit an Albanian security force to fight against communists and other insurgents”, Malcolm said. His unit had around 1,600 men. Although claims were made that it committed war crimes against Communist Partisan fighters, it is unclear if any of them were ever prosecuted.

Romeo Gurakuqi, a historian at Tirana University, told BIRN that Deva’s role was crucial in the fight against Kosovo Albanians who joined the Partisans. “Because of Deva’s [military] division and the Germans’ support, the Partisan movement in Kosovo could never reach any considerable size,” Gurakuqi said.

In September 1944, as Germany’s hold over the Balkans weakened, Deva then became one of the leaders of Second League of Prizren, an organisation of Kosovo Albanian nationalists who wanted to stop the Yugoslav Communists taking control over Kosovo, and to unify all territories in which ethnic Albanians formed the majority.

After World War II ended with the defeat of the Nazis, Deva fled into exile in Austria, then Syria, and finally emigrated to the United States, where he led the anti-Communist Third League of Prizren. It was later claimed that he was backed in his anti-Communist efforts in exile by the CIA. He died in 1978.

Historian Milo said that Albanian historiology continues to suffer from political partisanship when it comes to interpretations of historic figures, particularly those from the World War II period and its aftermath. He argued that “primitive nationalism and folkloric patriotism” should not be allowed to hinder the scientific assessment of historical facts.

The disputes over the assessment of Deva’s role in Albanian history resurfaced during the row over the renovation work at his former house in Mitrovica. After the criticism from the Simon Wiesenthal Centre and the German ambassador to Pristina, the EU and the UNDP decided to put the project on hold.

Kosovo’s Ministry of Culture has said it regards the house as a cultural heritage site that deserves preservation because of its architectural importance as the first building in the modern Western-European style in Mitrovica, and has insisted that the renovation does not honour Deva as a historical figure. But the ministry declined to say what will happen with the project now.