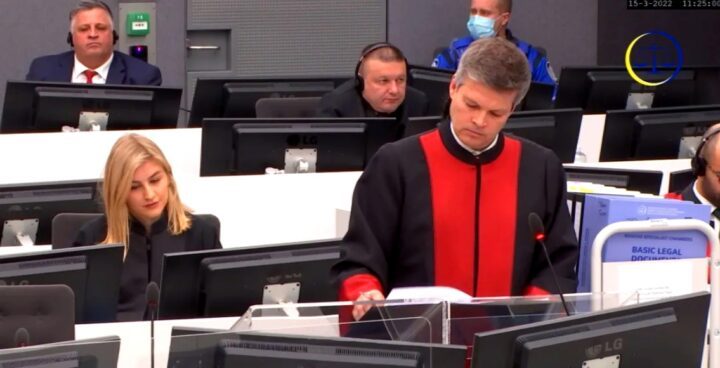 In closing statements at the Kosovo Specialist Chambers, the lawyer for the leader of Kosovo Liberation Army War Veterans’ Organisation said his client was only expressing the widespread concern that the court is ethnically biased.

On the second day of closing statements at the trial of Hysni Gucati and Nasim Haradinaj at the Kosovo Specialist Chambers in The Hague on Tuesday, Gucati’s defence lawyer Jonathan Rees claimed his client only asked the court to investigate crimes committed by all sides during the Kosovo war and was not trying to obstruct justice, as the indictment alleges.

“The prosecution is focused that Gucati and others want the court to be dissolved via legal remedies, but they are not taking into account the context that Gucati has constantly said during this procedure, he requests the establishment of a court that investigates all crimes,” Rees told the court.

He said that Gucati was raising his concern about “selective justice” – a concern which he said is shared by many others in Kosovo. Both Gucati and Haradinaj believe the Hague court is biased because it was set up to try ethnic Albanian KLA fighters, not Serbs who committed the majority of crimes during the Kosovo war.

“Mr. Gucati expressed his concerns on the court and has in fact objective reasons to support this position or his view… as we have seen from the evidence, many involved here and many members of the press in Kosovo share the same viewpoint,” Rees said.

“Gucati called for justice for all and not justice only for some,” he added.

Gucati and Haradinaj, the leader and deputy leader of the Kosovo Liberation Army War Veterans’ Organisation, are on trial for alleged obstruction of justice and witness intimidation.

The two men were charged after they received batches of legal documents leaked from the Specialist Chambers, which contained confidential information about protected witnesses in cases against KLA ex-guerrillas, and urged media in Kosovo to publish extracts from them. They have both pleaded not guilty.

The Specialist Chambers were set up, under pressure from Kosovo’s Western allies, to try crimes allegedly committed during and just after the Kosovo war from 1998 to 2000.

They are part of Kosovo’s judicial system but located in the Netherlands and staffed by internationals and are widely resented by Kosovo Albanians who see the court as an insult to the KLA’s war for liberation from Serbian rule.

Closing statements in the trial are scheduled to continue all week.