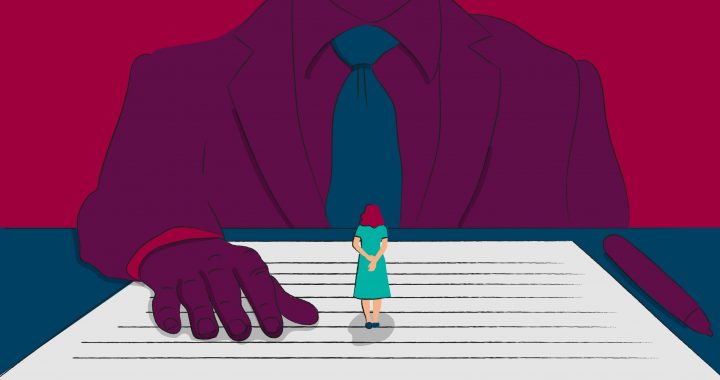 Given recent history of Kosovo’s higher education system, perhaps it is unsurprising that a paper co-authored by a professor claims that one of the main causes of sexual harassment is women dressing provocatively, but it is still completely unacceptable.

This ‘scientific’ assertion from Kosovo researchers Ferdi Kamberi and Besim Gollopeni makes one wonder whether sexual harassment of women in the workplace is a tradition that goes all the way back to Ancient Illyria.

Kamberi and Gollopeni’s paper is very poorly written, with broken English, and nonsensical sentences. Just to provide one example, the authors claim that: “Sexual revolution of the 70’s of the last century, made this phenomenon to be expand due to the fact that in the name of the sexual freedom they made many things to be imposed starting from harassment in the street up to the conditioning to offer sexual pleasures on exchange for other favors such a job or promotion, money and other forms.”

The paper’s methodology is almost as puzzling as its language. It is based on interviews conducted by the authors with 47 respondents who work in both the private and public sector.

In a section that outlines conclusions and opinions, which is not clearly labelled as participant responses, the authors write that one cause that leads to sexual harassment is “female employees not respecting dress codes in the workplace.” They further expound that women wear “party dresses” to work and look “very provocative.”

Other conclusions include that sexual harassment is caused by the use of cosmetics, and that men are often sexually harassed by women when a female employee “has problems with their spouse or is single.”

Unsurprisingly, the paper was published in what is known as a predatory journal, a contemporary form of academic misconduct in which authors are either tricked into, or willingly, publish in lower-quality journals that offer quick publication of papers, often without proper peer-review or editorial process.

These journals are filled with low quality articles, often riddled with grammar, spelling and translation mistakes, and are even often prone to plagiarism – flaws which would never be accepted at respected scientific publications.

What is more concerning is that the second author of this paper, Gollopeni is a professor at the Isa Boletini University in Mitrovica, a public university, and the paper is listed on his public CV.

The publication of scientific papers are one of the main requirements for promotion within public universities in Kosovo, and papers such as these are able to pass inspection because our universities only tick them off on application forms, rather than assessing them for quality.

As well as accepting low quality papers from staff, archaic views on sexual harassment have also been clearly prevalent in Kosovo’s higher education institutions over the last decade.

Activists have been pointing out for years the sexist and misogynist biases included in scientific literature in Kosovo. In 2014, law students exposed that a book on Criminology, blamed victims of rape for the crime.

Meanwhile, several professors at public universities have been outed as sexual harassers in the past few years, with little to no impact on their career. A fresh movement against sexual harassment in the University of Prishtina started in 2018 when a vice-rector blamed students for being sexually harassed because of their “provocative outfits.”

A few protests later, the vice-rector was dismissed, and the University of Prishtina pledged to compile a regulation against sexual harassment and to properly address current and future sexual harassment cases at the university. A regulation was drafted with the help of civil society activists, students, and women’s rights activists, but to this day, two years later, it remains unapproved on someone’s desk.

In this context, the content of the paper published by a professor at a Kosovo university is perhaps not surprising, but that such an article goes unchecked by our public institutions is still completely unacceptable.