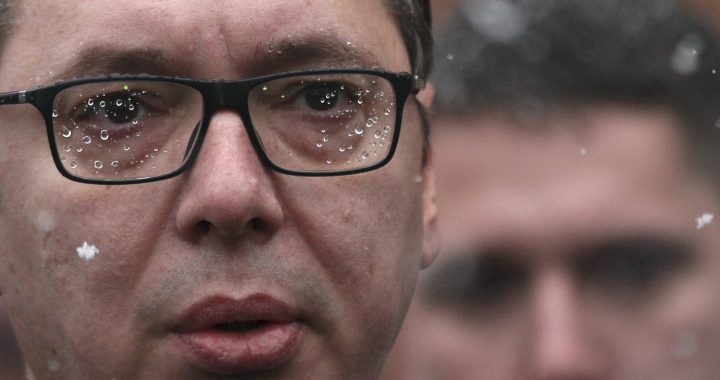 Whatever the final shape of the new government in Kosovo, it is clear that Serbs will have far less influence on it than the previous one.

In terms of votes alone, the biggest loser in the recent parliamentary elections in Kosovo was Ramush Haradinaj, the former prime minister until the elections. After his coalition won only around 11.6 percent of votes cast and was ranked in fourth place, it does not stand much chance of becoming part of the next government.

But in terms of the long-term results, the biggest loser was not Haradinaj but a man who doesn’t even live in Kosovo – and whose candidates scored a better result in the recent elections than they did in the previous ones in 2017.

That was the President of Serbia, Aleksandar Vucic, the figure behind Lista Srpska, the Kosovo Serb party that won 50,417 votes, i.e. all 10 seats in the parliament – one more than in the previous elections – reserved for the Serbian community in Kosovo.

How can a better result make someone a loser? By concluding that Vucic’s MPs in Kosovo won’t have a say on any of the key issues in Prishtina.

This is because the expected winner of the elections, Albin Kurti, leader of Vetevendosje is expected to form a government with the Democratic League of Kosovo, LDK – and because such a government won’t depend on the votes of Kosovo Serb MPs.

The constitution of Kosovo guarantees the Serbian community one minister in government. Kurti claims the Serbs will be represented in the future government – but not by Lista Srpska. He believes that Lista Srpska is not really a party but a state, meaning Serbia.

That means Kurti will refuse to make any deal with Vucic, who was a coalition partner in Haradinaj’s former government via Lista Srpska, which held three ministries and one deputy prime minister post. It goes without saying that Vucic doesn’t like this attitude at all.

It is possible that Kurti’s friends in the EU and the US will pressure him into giving Lista Srpska one ministerial place. But even if that scenario becomes reality, it won’t be of much importance to Vucic, since the Lista Srpska’s influence will still be marginal.

Things were different before. Vucic’s people had secret communications with Haradinaj. The former prime minister on several occasions mentioned reaching agreements on many issues with Milan Radoicic, an informal representative of the Serbs in Kosovo. For a long time, Radoicic had no formal function but he was the one suspected of making decisions about everything in the Serb-run north of Kosovo.

He is now in hiding, after a court in Prishtina issued a wanted notice against him because of suspicions that he was involved in the assassination of the moderate Kosovo Serb politician Oliver Ivanovic. Ivanovic was held in great esteem by the public, but was not under Vucic’s control.

Another blow to Vucic is the preliminary conclusion of the Election Observation Mission of the European Union, which concluded that “the campaign environment in the [election in] Kosovo Serb areas was marred by intimidation, which targeted non-Lista Srpska candidates and supporters.”

Although the President of Kosovo, Hashim Thaci, scheduled the elections, political life in the north of Kosovo remains controlled by Belgrade, by Vucic’s regime.

Vucic can’t stand opposition and political rivals, either in Serbia or in Serbian municipalities in Kosovo. Rada Trajkovic, who led another Serbian coalition, “Sloboda” [“Freedom”], has spoken publicly about the death threats she received. Those threats didn’t come from Albanians.

The Serbs in Kosovo and those in Serbia know what kind of pressure is put on citizens who are blackmailed to vote for Vucic’s candidates. Now, this situation has been acknowledged for the first time in the Serbian north of Kosovo by an international organisation, the Observation Mission of the EU.

It is another example of the repressive behavior demonstrated at all elections in Serbia and in northern Kosovo by the people gathered around Vucic’s Serbian Progressive Party, SNS. This report will surely reflect on the situation in Serbia, where some opposition parties have announced that they will boycott the elections that should be held in spring 2020.

Vucic’s associates in Belgrade had to accept negotiations with the opposition, attended by representatives of the European Parliament. Those negotiations themselves are an indirect recognition that the conditions for fair elections do not exist in Serbia.

Vucic may receive another blow if Kurti decides to start a real fight against crime and corruption, which have blown up into epic proportions in Kosovo. The epicentre of this evil is in the north of Kosovo, where Serbian and Albanian mobsters have excellent cooperation. That is why the British embassy to Kosovo in April advised UK citizens to avoid travelling to the north.

What life looks like in the north is best described in an interview by Slavisa Ristic, a politician from Kosovo, who said that “the north of Kosovo is run by groups of people that some call SNS activists but are actually criminals.” Ristic stated further that those people are instructed to “intimidate everyone believed to be a problem for Vucic or his party”.

But that situation cannot last forever. At the beginning of 2018, former German foreign minister Sigmar Gabriel said in the North Mitrovica that, in this part of Kosovo, “ultimate power is held by people from organized crime, who don’t shy away from murders, which is something the international community mustn’t tolerate”.

The international community, as well as Kurti’s voters, can be expected to ask the new government to start fighting crime and establish the rule of law. A priori, this will have to include dealing with criminal groups in the north. If that happens, many of Vucic’s people will be under pressure. In that case, he will have to move some of his “field workers” to Serbia, which will weaken his influence in the north of Kosovo.

The continuation of negotiations on normalization of relations between Serbia and Kosovo will meanwhile be more difficult for Vucic than ever, because the new Kosovo delegation will have somewhat different attitudes than it did before. Kurti has already announced that he intends to re-evaluate the agreements reached with Serbia, while he was always against establishing the [agreed] Association of Serbian Municipalities.

We should not disregard a personal element in all this. Namely, Kurti was arrested and convicted by the Serbian authorities during the war in Kosovo in 1999 and spent more than two years in prison. One of the people in power in Serbia in 1999 was – Aleksandar Vucic.

Milenko Vasovic is a well-known Serbian journalist and editor.

The opinions expressed in the Comment section are those of the authors only and do not necessarily reflect the views of BIRN.