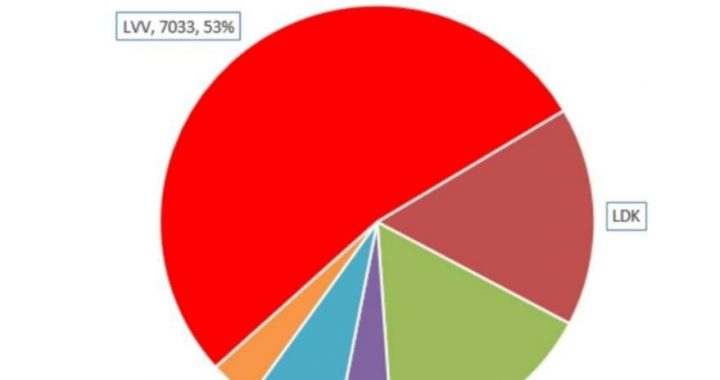 Over 13,000 postal votes sent by members of Kosovo’s diaspora were counted on Wednesday, widening Vetevendosje’s lead over LDK in the results of October’s parliamentary election.

At around midnight on Wednesday, in the Center of Counting and Results at the headquarters of the Central Election Commission, CEC, counting finished for the more than 13,000 eligible postal votes cast in this month’s parliamentary elections.

Out of the 13,241 votes that were counted, 7,033 were for Vetevendosje. The Democratic League of Kosovo, LDK, received the second highest total with 2,158 votes, followed closely by the Democratic Party of Kosovo, PDK, who received only 19 votes less than LDK, with 2,139.

The postal votes have not altered the positions the parties were placed in by the preliminary results released after counting had finished for all non-conditional votes cast at the ballot box on October 6. Vetevendosje remain in first place, ahead of LDK in second and PDK in third. However, Vetevendosje’s lead now extends to over 10,000 votes.

The coalition between NISMA, the New Kosovo Alliance, AKR, and the Justice Party, PD, received the fourth highest total with 916 postal votes. Even with this increase to its overall vote, the coalition still look set to narrowly fail to pass the threshold of 5 per cent required for parliamentary representation, with the coalition currently on 4.99 per cent of the vote.

More than 240 of the coalition’s postal votes came from Kazakhstan, where hundreds of Kosovar citizens are employed, mostly in the construction industry, by Mabetex, a company owned by Behgjet Pacolli, the head of AKR.

Outgoing Prime Minister Ramush Haradinaj’s the Alliance for the Future of Kosovo, AAK, who ran in the election in coalition with the Social Democratic Party, PSD, received 555 postal votes. The coalition will be represented in the parliament having secured over 11 per cent of the overall vote, but are not expected to form part of the future government, which looks set to be a coalition between Vetevendosje and LDK.

The 13,000 votes counted represent only one-third of the over 42,000 applicants who attempted to register to vote from abroad, of which more than 33,000 were registered. More than 4,500 envelopes containing postal votes were not counted as they were received after the October 5 deadline.

Another 4,000 envelopes sent from Serbia have also not been counted after an incident that occurred last Sunday at the CEC, in which 26 officials suffered an allergic reaction after coming into contact with the envelopes. The counting of these votes has been halted and an investigation by Kosovo’s Special Prosecution is ongoing.

Out of the roughly 13,000 postal votes, nearly 6,000 came from Kosovo’s diaspora in Germany, followed by nearly 4,000 from Switzerland. The overall turnout in the October 6 election reached 44 per cent, the highest since Kosovo declared independence with more than 850,000 Kosovars heading to the polling stations.

On Thursday, the CEC decided to send results from 530 polling stations for a recount due to shortcomings in the counting process. More than 25,000 conditional votes will also be counted in the upcoming days, with final results expected to be certified in November.