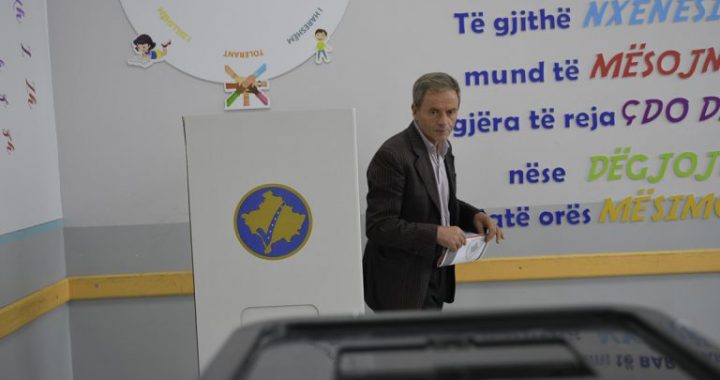 Head of the Central Election Commission, CEC, Valdete Daka announced on Sunday afternoon that voter turnout in Kosovo’s parliamentary election has surpassed numbers recorded at the same time during the country’s last elections in 2017.

The CEC’s announcement reveals an increase of more than two per cent in voter turnout compared to the June 2017 elections, amounting to around 25,000 extra ballots cast. 27.75 per cent of eligible voters had cast their vote by this point in 2017. Final voter turnout nationwide reached 41 per cent in 2017, according to the CEC.

Polling stations across the country will remain open until 19:00.

While numerous arrests and reports of violations of electoral law have been reported throughout the day, said CEC, these will have little to no impact on the quality of the election process. “The minor incidents up until now will not harm the electoral process, which is going well,” continued Daka.

There are an estimated 64,000 additional people registered to vote in the 2019 elections. CEC representative Valmir Elezi stated on Sunday morning that around 46,000 names had been removed from CEC’s register of eligible voters, following death or loss of citizenship. On the other hand, more than 110,000 people became eligible to vote in 2019 through new registrations, reaching voting age or gaining Kosovo citizenship.

A number of irregularities in voting procedures throughout the day may sound familiar. According to BIRN’s field monitors, similar to the June 2017 elections, cases of party members contacting potential voters and organizing their transport to polling stations to assist them have been reported, raising questions over voter influencing and pressure.

Several people have also been arrested following incidents of voters taking pictures of their ballot and posting them on social media, with four people arrested in Prizren on suspicion of violating provisions on voter confidentiality laid down in Kosovo’s criminal code. The Democratic Party of Kosovo, PDK, has also been reported attempting to influence voters by circulating a vehicle with its party insignia close to a polling station in Skenderaj.

To ensure the smooth running of the voting on Sunday, the Kosovo Prosecution Office said that it has 100 prosecutors on call in order to address violations of electoral procedure as quickly as possible. The Prosecution warned that further arrests would take place if reports of voters publicizing their ballots continue.

The October 6 elections were primarily triggered by the resignation of Prime Minister Ramush Haradinaj on July 19. The decision to hold early elections was announced on August 22 by Kosovo President Hashim Thaci after a motion of no confidence was passed in the Kosovo Assembly.

A team of election monitors from the Balkan Investigative Reporting Network will be following the elections throughout the day. Check our website, Facebook and Twitter page for regular updates on the progress of the election process.