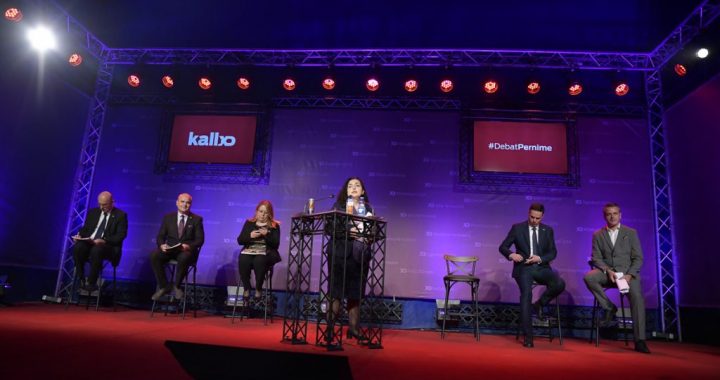 LDK’s Vjosa Osmani and her team talk plans for governance

As part of a series of debates with the prime ministerial candidates on BIRN’s televised program Jeta ne Kosove,Vjosa Osmani of LDK discussed the coalition’s policy plans and promises for the next administration alongside a team of candidates vying for seats in the Kosovo assembly.

In the debate, Osmani said were she to form the next government, LDK would reduce the number of government ministries to 12, something that was promised by another contender in October’s elections.

In her opening remarks on foreign affairs, the prime ministerial candidate said, “International partnership is an existential issue for the state of Kosovo,” which is a well known mantra in the vocabulary of LDK members.

Osmani reiterated that LDK remains firmly against any law or policy that would include changes to Kosovo’s borders, a discussion that was initiated by Kosovo’s President Hashim Thaci. When asked about LDK’s vice-president, Lutfi Haziri, who has spoken out in favor of such solutions in the past, Osmani replied that she convinced Haziri to change his mind on this topic, and that LDK rejects any ideas that involve touching the borders.

Concerning relations between Kosovo and Serbia, Osmani embodies a logic that she described in English: “No deal, better than a bad deal,” while adding that the red lines already set down should never be crossed, meaning that Kosovo’s statehood, borders and sovereignty or domestic regulation of the state should be out of the question.

Osmani said that her strategy for the admission of Kosovo into international organizations would focus on those that would have a “direct impact on the lives of citizens,” such as the World Health Organization, WHO, and would not be concentrated solely on those that have political benefit.

Concerning their economic program, LDK was represented in the debate by former MP of the Kosovo Assembly, Lumir Abdixhiku, who is again standing for a seat this year.

Abdixhiku said that LDK has a national plan to save more than 100 million euros per year from Kosovo’s budget through savings and cutting expenses. He said that the reduction of the government to only 12 ministries and two deputy ministers for each is one of the strategies that will contribute to these savings.

Another source of savings would be the “false” war veterans’ pensions scheme, he said. There are more than 40,000 people who have been awarded the status of war veteran for the purpose of receiving a monthly pension from the state budget, many of whom are considered to be fraudulently receiving this money and damaging the state’s budget by millions. However, no details were revealed on the steps LDK plan to take in this regard.

Abdixhiku said that LDK would find money for Kosovo’s budget by unlocking profits Kosovo has made through the privatization of socially-owned enterprises following the war, money that has been frozen by the Kosovo Trust Agency amounting to around 380 million euros and which no Kosovo Government has been able to tap into. According to LDK’s economic expert, 300 million euros would be invested in innovation and youth projects, without specifying where exactly.

Environmental protection is an ‘elementary right’

Osmani said that during her mandate as prime minister she will advocate to include the human right to water and healthy air in Kosovo’s constitution. “Kosovo would have a prime minister that strongly believes that this is an elementary right of our children,” she said. “For me, the environment is one of the most important things, because it concerns the lives of our children.”

Hykmete Bajrami, former Minister of Trade and Industry during Mustafa’s government from 2014 to 2017, said that she and LDK did not support the contract that the Kosovo Government has concluded with private company ContourGlobal to build the new coal-fired power plant, Kosova e Re, which is expected to cost Kosovo more than one billion euros.

However, publicly, no LDK official was ever vocal about the construction of Kosova e Re during the party’s coalition with PDK.

Regarding the construction of the controversial hydropower plants on Kosovo rivers to generate alternative energy sources, Osmani said that new hydropower plants in Peja would not be allowed to be constructed. “I am convinced that many of these hydropower plants have been built for people’s personal gain, and the interests of the public were completely neglected.”

Doubling investment in the healthcare sector and protecting workers’ rights

Along with education, Osmani said that the healthcare sector would be the main focus of her government. According to her, doubling the budget allocated to healthcare is foreseen, which would bring the budget for health up to 400 million euros annually.

Osmani promised that during her mandate, LDK promises 100 per cent coverage of all medication for Kosovo citizens. Until now, a patient in Kosovo is expected to buy almost all medication with money from their own pocket. The cost of this policy would be around 100 million euros, according to Osmani.

According to MP candidate Haxhi Avdyli, an estimated 100 million euros from the pockets of Kosovo citizens is spent yearly on seeking medical treatment abroad, and that will stop under LDK’s administration, said Avdyli.

An extra 100 million euros will be allocated to spending on medical technology for the University Clinical Center of Kosovo, QKUK, said Osmani.

LDK’s prime ministerial candidate also promised to begin the collection of premiums in the first year of LDK’s mandate for the purpose of jump starting a fund for their health insurance system. However, Osmani implied that only by the end of the mandate would Kosovo citizens paying the premiums receive the health insurance coverage they would be paying for.

LDK’s representatives were challenged by anchor of the debate, Jeta Xharra, on why these policies were not implemented before in times when LDK has been in power previously. Since Kosovo became independent, LDK has twice been in charge of operating the Ministry of Health.

For workers’ rights, LDK promised that there would be an increase in the number of staff within the Labor Inspectorate.

Abdixhiku promised that workers’ rights would be at the very center of LDK’s governing plan. From the 40 labor inspectors that Kosovo currently has nationwide, LDK promised to increase that to 400, aiming to prevent and investigate violations of workers’ rights across various employment sectors in Kosovo. In the last five years, more than 100 employees have died at the workplace in Kosovo, during which time LDK was in control of the Ministry of Labor and Social Welfare from 2014 to 2017.

Abdixhiku explained that the policy of hiring more than 360 inspectors would cost only four million euros and will occur in the first year of LDK’s mandate. According to Abdixhiku, this move would also ensure an eight-hour working day for employees.

Increasing the quality in education

For LDK, the main focus of its administration is to improve the quality of Kosovo’s education system. LDK promised a 50 per cent increase in investments in education.

LDK also said that it would work hard to make sure that employment in education would be conducted on the basis of merit alone, and that quality education is the cornerstone of LDK’s program.

In higher education, Osmani said that we should fight plagiarism and introduce vetting processes for university staff.

A vetting process across the entire justice system

Kosovo’s justice system was the last topic to be discussed during the debate. Osmani introduced her plan ‘Justice2023,’ which would establish a vetting process for employment in the judiciary, the prosecution and Kosovo Police. According to her, this vetting process would assess the integrity and investigate the wealth of the employees in these sectors, as well as their performance. “The aim is not only to have people with the highest integrity but also to decriminalize the justice system,” said Osmani.

A permanent vetting process would continue each year, said Osmani.

When asked about the financial cost of such reform to the justice sector, Osmani said “We would fulfil every demand that the judiciary would need. They will just give us a number and amen.”

On Sunday, the prime ministerial candidate of NISMA-AKR-PD coalition Fatmir Limaj will be interviewed for Jeta ne Kosove in the same format. Prishtina Insight will report on each of the prime ministerial debates which will take place over the next two days. All candidates confirmed to be interviewed. However, the Democratic Party of Kosovo candidate, Kadri Veseli, canceled his interview for Jeta ne Kosove, despite previously confirming his attendance.