Running together or alone?

With the deadline having passed for forming pre-election coalitions on Friday night, the Kosovar electorate now have a clear picture of the options that will be on the ballot paper in October’s elections.

The rest of the Kosovar Albanian parties represented in the last parliamentary mandate meanwhile have formed two separate coalitions. The Alliance for the Future of Kosovo, AAK, will run with the Social Democratic Party of Kosovo, PSD, while the New Alliance for Kosovo, AKR, have joined forces with the Initiative for Kosovo, or Nisma.

A coalition of Kosovar Serb politicians was also announced on Wednesday, while the VAKAT Coalition, a long standing union of Bosniak political parties in Kosovo will also run together for the seventh time.

The coalition that never came

That Kosovo’s three largest parties will all run alone came as something of a surprise.

A decision from the Constitutional Court in 2014, has ensured that the ‘subject’ (either a party or coalition of parties) that gets the largest share of the vote has the first chance to present a candidate for prime minister to the Assembly and form a government.

If this candidate fails, the president, after discussions with other elected parties, must find another candidate for prime minister to be presented to the Assembly.

This advantage that comes from winning the biggest share of the vote has resulted in a taste for pre-election coalitions. After a potentially electorally damaging spell in government together, both PDK and LDK ran in the 2017 elections as part of a coalition, with PDK registering their union with AAK and Nisma with the Central Election Commission with just minutes to spare before the deadline. 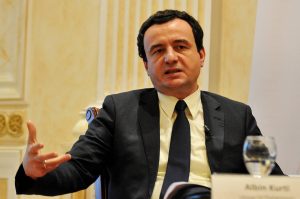 Speculation had been building that another large scale coalition may be formed for this October’s elections, with the majority of it focusing on a potential union between the two parties leading in the polls, LDK and Vetevendosje. But discussions seemingly broke down over who would be the potential coalition’s candidate for prime minister, Vetevendosje’s Albin Kurti or LDK’s Vjosa Osmani.

On Friday afternoon, Vetevendosje made public a letter which offered to run with a joint list of candidates, with Osmani listed first and Kurti second, with whoever received the most votes from the electorate becoming the nominee for prime minister in the event that the party won the largest share of the vote.

Kurti described the offer as a ‘big concession’ but it was rejected by LDK, with party leader Isa Mustafa arguing that the battle would then center around the coalition, and not against the members of the PAN coalition (PDK, AAK and Nisma) that made up the previous government. 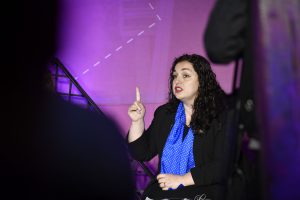 The two parties are now spared forming a joint political platform over the coming weeks, a considerable challenge considering the substantial differences in their ideological lines, especially on economic matters.

The obstacles in building such a coalition also include a longer history of division between LDK and Vetevendosje, with both camps being polarized not only ideologically, but also from a long history of problematic relations. One of LDK’s alleged conditions for forming a coalition was that Kurti pay respects at the grave of Ibrahim Rugova, due to his absence at previous events commemorating the LDK founder and former president of Kosovo.

In more recent history, during the time of the 2014-17 LDK-PDK government, Vetevendosje and the governing LDK had a number of vicious exchanges, with Vetevendosje activists often accusing LDK of treason. “Ise Ise argati i Serbise,” [Isa Isa, the servant of Serbia’] became a staple chant from Vetevendosje protestors against LDK’s leader, and then Kosovo Prime Minister, Isa Mustafa.

In the same period, LDK officials often labeled Vetevendosje as a party of “thugs” and “communists,” while LDK MP Besa Gaxherri asked whether Vetevendosje was “a political party or a terrorist organization?”

However, after the 2017 elections left both parties in opposition, the two have found a way to reach common ground and coordinate activities, and neither have rejected the possibility of a post election coalition in the Assembly.

The unraveling of PAN

The main motivation behind a potential coalition between Vetevendosje and LDK appeared to be the desire to ensure that no parties from the previous PAN coalition government won the largest share of the vote, especially PDK, who have governed for more than a decade.

PDK will also run alone, despite speculation that the party may have run with previous coalition partners Nisma and AKR, with whom the party has a long history of collaboration.

The failure of Vetevendosje and LDK to form a coalition, seemingly restores PDK’s chances of winning the largest share of the vote, and potentially even forming part of a government for the fifth consecutive mandate.

However, Vetevendosje and LDK have ruled out the formation of any government involving themselves and PDK, while AAK’s outgoing prime minister Ramush Haradinaj has also rejected the idea of a second coalition government with PDK after what he described as a ‘bitter experience’ from the last two years.

PDK’s chairman Kadri Veseli during a meeting with leading figures of the party. Photo: PDK.

PDK will run with party leader Kadri Veseli as candidate for prime minister and have announced that fighting corruption and nepotism will be a key part of their electoral campaign, a move seen by critics as deeply ironic given their record in government over the years.

Though all of the parties making up the previous PAN coalition government will run separately, its former prime minister, Ramush Haradinaj will once again run for office, having been put forward as a candidate by a new coalition between his party AAK and the Social Democratic Party of Kosovo, PSD.

The two parties confirmed their plans to run together in October’s elections early. Haradinaj and PSD leader Shpend Ahmeti signed the deal on running together on August 19, before the motion of no confidence in Haradinaj’s government had even passed, confirming the need for elections.

“100%” will be the slogan of the AAK-PSD coalition, a reference to the imposition of a 100 percent tariff on Serbian goods entering Kosovo initiated by Haradinaj’s government in November 2018, which both parties have pledged their support for. This week, in an interview on KTV’s Interaktiv, Haradinaj described the coalition with PSD as “natural”, despite the two party’s seemingly distinct ideological differences. AAK is self-branded as a center-right party, while PSD’s main exponents identify with center-left social democracy.

In Haradinaj’s opinion, this should not be an obstacle for forming a coalition, mentioning PSD’s backing for upgrading the competencies of Kosovo Security Forces in the previous parliamentary term.

However, on decisions for the future, the two parties are seemingly more divided. The “Dukagjini” highway, set to cost around one billion euros has been described as top of Haradinaj’s list of priorities, while Ahmeti has openly stated that the motorway is not a priority for his party.

Key figures in PSD also have a longer history of disagreements with AAK and Haradinaj. In 2014, while part of Vetevendosje, PSD’s Dardan Molliqaj accused Haradinaj’s party, and the leader himself, of extortion.

The motivation for both parties working together is largely seen as being for electoral advantages. Polls put AAK not far behind Vetevendosje, LDK and PDK, and the extra votes gained from PSD supporters may give them an outside chance of winning the largest share of the vote.

The polls make less good reading for PSD. The party experienced a transformation in May 2018 when Ahmeti was elected as their new president after the Prishtina mayor left Vetevendosje, with twelve deputies elected as part of Vetevendosje’s list of candidates in the 2017 parliamentary elections joining him in the new party.

Far from predicting the party winning a similar number of deputies at this election, most polls have placed PSD at under five percent of the vote, not enough to pass the threshold for representation in the Kosovo Assembly. Critics have argued that the coalition with AAK is a way for key figures in the party to guarantee a seat in the Assembly.

Similar accusations have been made of the coalition between Nisma and AKR, again two parties with seemingly divergent ideologies. Nisma is self declared as a social-democratic party, while AKR is a party focussed on commerce under the leadership of multi-millionaire businessman Behgjet Pacolli.

Asked about any potential ideological cleavages at the press conference announcing the coalition, Nisma leader Limaj responded that: “This coalition is more natural than many other coalitions happening these days.”

Limaj was confirmed as the candidate of both parties for prime minister, the former Kosovo Liberation Army commander insisting that the “Nisma-AKR coalition goes alone in the elections.”

However, the candidate also stated that he does not aim to become prime minister, but that the coalition intends to work with the largest entity after the elections, in order to consolidate its powers.

The number of votes received by both parties in recent elections has often wavered around the five percent threshold. 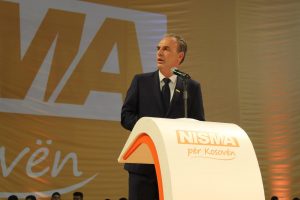 Nisma was formed in February 2014 after Limaj and other key figures separated from PDK, and the party ran alone in the elections of June that year, just passing the threshold with 5.15 percent of the vote. It has subsequently run both elections as part of a coalition, alongside PDK and AAK in 2017, and now with AKR.

AKR won the third largest share of the vote in 2007, but have seen diminishing levels of support ever since. Despite running in a coalition with six minor parties in 2010, AKR received 20,000 votes fewer, and by 2014 had dropped to below the five percent threshold. In 2014, the party ran as part of the LAA coalition with LDK and Alternativa, but then defected to join the governing PAN coalition after the election.

Key figures in the two parties have not always seen eye to eye. In previous years, Pacolli and one of the founders of Nisma, Jakup Krasniqi, have exchanged accusations over corruption, misuse of power, and violations of the constitution.

With the PAN coalition disbanding entirely and the country’s three largest parties running separately, October’s parliamentary elections are perhaps Kosovo’s most uncertain yet, with the country’s next prime minister potentially any one of four candidates. However, the open nature of the competition also gives an opportunity to electorate to have its biggest say yet in who will lead the next government.