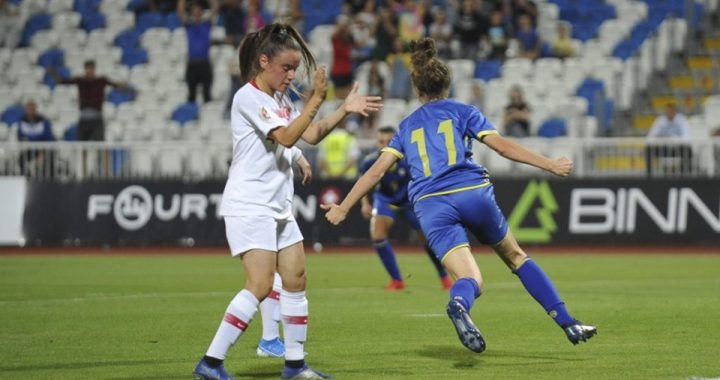 Kosovo’s women’s football team beat Turkey at home but lose in Slovenia, leaving them in fourth place in qualification Group A for the 2021 European Championships with eight games left to play.

On Tuesday evening, Kosovo suffered a 5-0 defeat to Slovenia in Dravograd, in their second qualifying match for the UEFA Women’s Championships, which will be held in England in 2021.

Kosovo found themselves trailing by two goals at half time after a first half full of shots on goal for both sides. Lara Prasnikar opened the scoring in the 14th minute to make it 1-0 to the hosts, before Slovenia captain Mateja Zver added a second from a free kick.

But the game ran away from Kosovo in the second half, with Spela Kolbl adding a third Slovenian goal quickly after the restart, followed by second goals for both Zver and Prasnikar for Slovenia’s fourth and fifth.

The defeat followed an impressive opening win for Kosovo, who beat Turkey 2-0 in front of more than 3,000 fans at the Fadil Vokrri stadium in Prishtina on Friday night.

Modesta Uka scored Kosovo’s first goal after an incisive attack down the Turks’ right hand side, before Liridona Syla volleyed home from close range to make it 2-0 after a mistake from the Turkish goalkeeper.

It was Kosovo’s first win in a competitive fixture, and one against a side ranked more than 60 places above them in the FIFA World Rankings, after losing all three matches in the preliminary round of qualifying for the 2019 World Cup in April 2017.

The victory was a positive start to Kosovo’s first attempt to reach a European Championship, having been drawn in a difficult group. Alongside Slovenia and Turkey, Kosovo will play current European champions the Netherlands, Estonia, and Russia, who have qualified for five of the last six European Championships.

In other results in the group this round, the Netherlands beat Estonia 0-7 in Tallinn, while Russia came away with a narrow 0-1 victory from their trip to Slovenia.

The Netherlands face Turkey, while Russia entertain Estonia later on Tuesday night. The qualifying tournament resumes next month, with Kosovo hosting Russia on October 4 before traveling to Estonia on October 8.