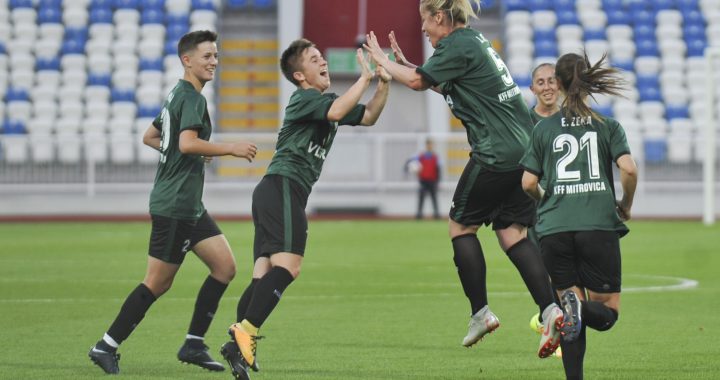 Scoring a goal in the 90th minute, KFF Mitrovica made history on Tuesday by qualifying to the top 32 women’s football teams in Europe, the first team from Kosovo to qualify to play in the Champions League since joining UEFA in 2016.

Winning a penalty in the final minute of the game against Montenegrin champions Breznica Pljevlja, KFF Mitrovica striker Kaltrina Biqkaj scored to put the team from Kosovo 1-0 up and past the qualification stage for the UEFA Champions League.

KFF Mitrovica, who have been the champions of the Kosovo Women’s Football League two years in a row, also eliminated Romanian team Universitatea Olimpia Cluj 2-1 and the Bulgarian team, NSA Sofia, 2-0 to reach to the top 32.

The team from Mitrovica are the first in Kosovo to advance since the country was granted UEFA membership in 2016. The live draw will take place on Friday, August 16, where KFF Mitrovica will discover which team they will be up against to advance to the top 16.

16 seeded teams and 16 teams that advanced through the qualification stages will go up against each other to win the Champions League title, the final of which will be held in Vienna in May 2020. The knockout stage, which will take place in September, could see KFF Mitrovica facing top European teams such as Lyon, Manchester City or Barcelona.

KFF Mitrovica are not the only team making history at this year’s UEFA Champions League. Albanian team KFF Vllaznia also qualified in a first for an Albanian side.

Defending champions Olympique Lyonnais, the French team from Lyon, have won the title four years in a row and six in total, winning in 2019 against FC Barcelona.

KFF Mitrovica first made it to qualification stage in 2018, but did not win any matches.

Kosovo Women’s Football League was established in 2010. Nine years later, KFF Mitrovica has won two domestic titles in a row, this year scoring a monumental 263 goals in 24 matches, conceding only five throughout the entire season.

Now, KFF Mitrovica is the first and only team to provide professional employment contracts to their players in 2019.

In 2019, Kosovo saw two teams in the men’s Champions League qualification stage, KF Prishtina and KF Feronikeli, but neither team was able to pass the qualifying stages. Kosovo men’s football teams have never made it into the top 32.

Domestic funding to develop the women’s teams is minimal, according to Valmir Krasniqi, coach of the team KFF Malisheva. “The gap is huge. Where the boys get 40,000 euros we get 4,000,” he said to Prishtina Insight in June.

Since 2016, the teams in the Kosovo Women’s Football League have relied primarily on small pockets of funding from UEFA, with teams receiving around 6,000 euros annually to keep the league afloat.

However, even UEFA’s funding favors men’s football heavily. While Kosovo’s men’s clubs have received six figure sums for their participation in UEFA competitions in 2017, KFF Hajvalia received less than 12,000 euros for participating in the Women’s Champions League.

All eyes will be on Nyon, Switzerland on Friday, where the final draw for the top 32 will be announced at 13:30.