Screening ‘pieces of our everyday life’

Poverty, lack of social welfare, migration, violence and suicide were amongst the themes explored by Kosovo’s young filmakers at DokuFest this year, ushering in a potential new era for Kosovar cinema.

This year, the national competition at DokuFest showcased a series of movies from a new generation of Kosovar filmmakers, whose focus has moved away from the past and toward the contemporary realities experienced by today’s Kosovars.

For Ilir Hasanaj, film programmer at Prishtina’s Kino Armata and a member of the jury for DokuFest’s national competition, it’s an exciting development. “I’m really happy that new generations are showing their stories, their view on the world, their view on Kosovo,” he tells PI.

There have been suggestions that, since its declaration of independence in 2008, cinema in Kosovo has focussed too heavily on the state’s turbulent creation, with stories from the Kosovo war in 1999, and its immediate aftermath.

Hasanaj though rejects the idea that the ‘war film’ has no story left to tell for Kosovar cinema, suggesting that perhaps the right movie is still yet to be made – “one that gets closer to what it was” – but is glad to see younger filmmakers drawing directly from their own experiences. “You can totally see that the newer generation is seeing the problems now and dealing with social problems,” he says. 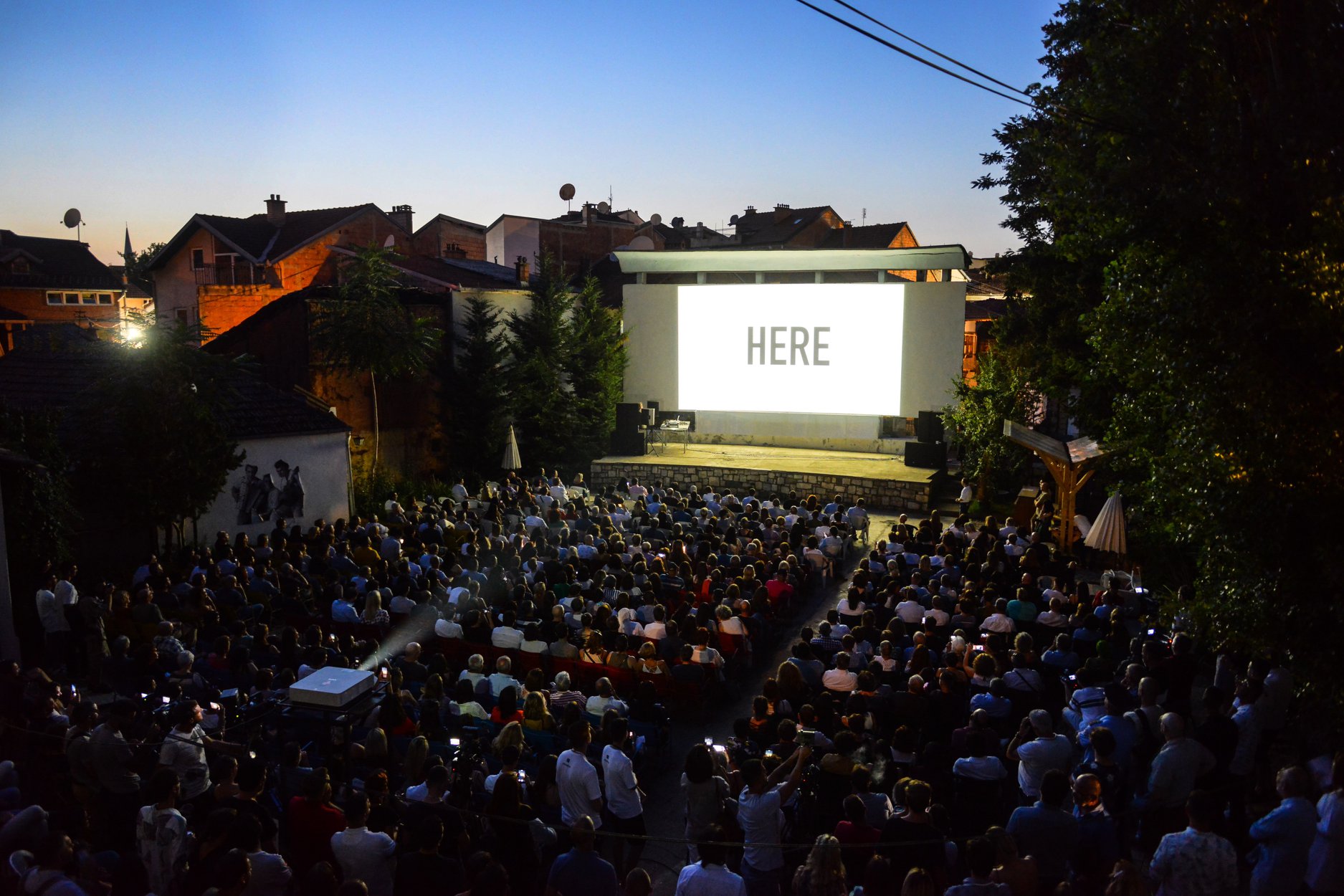 Two such directors, Lum Radoniqi and Besim Ugzmajli have placed their camera’s focus on the violence inflicted on Kosovars by poverty, bureaucracy, and the absence of healthy state protections for the vulnerable.

In 23-year-old Radoniqi’s “Dëshmia” (“Evidence”), a young couple, Besnik and Linda, must present Besnik’s elderly and ill mother, Xheva, to an official in order to continue receiving her pension – essential for the family’s survival after Besnik is not paid for the third consecutive month by his employer.

Dysfunctional infrastructure in Prishtina – broken elevators, dense traffic, closed roads – complicate the journey, and the exertion of transporting Xheva across the city imparts a tragic toll on the family.

Speaking to Prishtina Insight, Radoniqi explained that he wanted to create something that reflected a piece of everyday Kosovar reality and provide “a small voice” for the elderly and the sick in Kosovo, who he describes as “really on the margins of society.”

The film echoes Ken Loach’s Palme d’Or winner “I, Daniel Blake” in its depiction of the human suffering caused by government stringency on receiving basic social welfare, and is a damning representation of the young Kosovo state’s ability to provide basic care for its citizens.

“I think the Kosovo state looks after its citizens on paper but not in reality,” Radoniqi tells PI. “The institutions need to be more human. The state has created a reputation as something that punishes the citizens, when in fact they need to be more humane and take care of them.”

Ugzmajli’s “Rruga” (“The Path”) meanwhile, presents an unlikely friendship between Gent, a young boy, and Lena, a woman in her late thirties, who meet in an underpass in Ferizaj.

Both Gent and Lena give implausible explanations for hanging out in a tunnel so late at night, as well as for the scars of physical attacks left imprinted on their faces. The pair tell fanciful stories of loving and caring men in their life who accidentally caused the injuries, and will be there soon to pick them up.

Gent’s ‘father’ and Lena’s ‘husband’ turn out to be the same man, who is exploiting both of them financially, exposing yet more hardships and vulnerability of those unable to support themselves in contemporary Kosovo.

With such issues so prevalent at home, perhaps its unsurprising that migration out of Kosovo has reached such high levels. Statistics released by the Ministry of Internal Affairs this year showed that over 170,000 people left Kosovo between 2013-2017, nearly ten percent of the country’s total population.

But migration can also provide new versions of the same difficulties. Dritero Mehmetaj’s “Zgjedhe një emër” (“Pick a name”) and Arian Dalladaku’s “Larg” (“Far”) both tell stories of the struggles of being an undocumented migrant in the European Union.

It’s a topic Hasanaj is glad to see being explored on screen. “Most people here always think of Germany and Switzerland as this paradise,” he tells PI. “I think it’s very important to show this side of being lost and being somewhere where you shouldn’t exist, which is shown nicely in these two films.”

Rron, the protagonist in “Larg”, barely speaks as he journeys through Berlin, unable to explain himself after being accused of bicycle theft and rejected by his cousin, who feels unable to justify sheltering “an illegal” to his German partner.

But the representation of life in Berlin in “Larg” though is not limited to the difficult. The film moves to a musical beat, with live jazz soundtracking Rron’s trudge through the city’s streets and a final scene showing him indulging in Berlin’s famous party scene. However, the choice to shoot the party through a barred window from outside the house suggests Rron may have found himself lost in some kind of hedonistic imprisonment.

Meanwhile, across the border in Prague, Nora, the star of “Zgjedhe një emër” is being drawn into an even darker world. Disowned by her Kosovar family for having a child out of wedlock, she now has to find ways to support her young daughter as a single mother and undocumented migrant.

Mehmetaj’s decision to set the film in Prague was in fact a result of restrictions placed on him by the Czech film school he attends, which he fought hard to work against but also allowed the film to explore issues around modern slavery. The director’s main focus though was the narrative of an unprotected mother, to help tackle a culture of victim blaming he feels is prevalent in Kosovo, especially in situations surrounding women.

In the opening scene, Nora finds herself in a migration office being told she is to be sent back to Kosovo, as there are institutions which operate for women in her situation. ‘If these institutions were safe why would I come here with my child illegally?,’ she asks.

Mehmetaj tells PI that this aspect of the story came from experiences in Kosovo. “We know a lot of cases of women in Nora’s situation who went to these institutions to seek help,” he says. “You have these centres where these women are protected and no one knows where they are. But they are living in a kind of ‘safe prison.’ They can’t educate their kids, they can’t find a job, they can’t get reintegrated into society.”

Facing deportation, Nora’s precarious situation leads her to becoming dependant on Avni, a strip club owner who sexually exploits the women he provides paperwork, healthcare and money for. “She becomes a victim of a system based on the same principles, where the woman is an object,” Mehmetaj says.

Zeqiri’s “Nëpër Mendje” (“Through the Mind”) gives access to the internal monologue of a young woman grappling with depression, and thoughts which veer towards the suicidal. Despite her attempts to find beauty and joy in ‘the light’, the unnamed protagonist is constantly seduced by the idea of ‘not existing.’

Meanwhile, in Rama’s “Tegel” (“Seam”), Bujar, one of the central characters, disappears from the narrative in the first few minutes after the news that he has hanged himself in Prishtina reaches his friends and family back in Rahovec. Instead of focussing on Bujar’s demise though, “Tegel” tells the story of the living, how the people Bujar left behind manage to put their lives back together.

Both directors’ camerawork, spare use of dialogue and inventive lighting bring the internal worlds of their characters alive and provide illumination on a subject often shrouded in darkness.

It is the use of cinematic techniques, especially those in Rama’s “Tegel,” that particularly encourages jury member Hasanaj. “I really like the use of cinematography, it’s not just storytelling,” he tells PI. “It’s something that you see very rarely: someone that is not afraid to use cinematic tools. It’s a great way of seeing how a filmmaker will evolve, using cinema.”

Evolution is now the next step for all of the Kosovar directors exhibited in the national competition, many of whom were creating film school projects or are still in the infancy of their careers. However, the skills shown and the subjects tackled at this year’s DokuFest suggest a bright future for Kosovar cinema, not too far away.

The winner of DokuFest’s national competition will be screened alongside the winner of  Best Balkan Dox at Kino N’Lum at 22:00 tonight (Saturday Aug. 10).