During their visit to Dokufest, Serbian animators Ana Nedeljkovic and Nikola Madjak share their tactics for expressing anger toward the shared political reality in the Balkans: building an animated universe that captures corruption, isolation and false promises.

Ana Nedeljkovic and Nikola Madjak have stopped counting how many times they have taken the night bus from their hometown of Belgrade to Prizren to visit Dokufest.

Their debut film, Rabbitland – a depiction of the impossible climb out of state capture and dictatorship – premiered at the festival in 2014. This year, their latest film, Untravel, which looks at isolation, borders and the utopian dream of ‘abroad’, screened as part of the international short film competition.

Madjak believes that using animation to make films that raise political and social awareness is crucial. “It is something very important to us. Coming from the country that is responsible for the war in former Yugoslavia, we feel like we have to say something.” 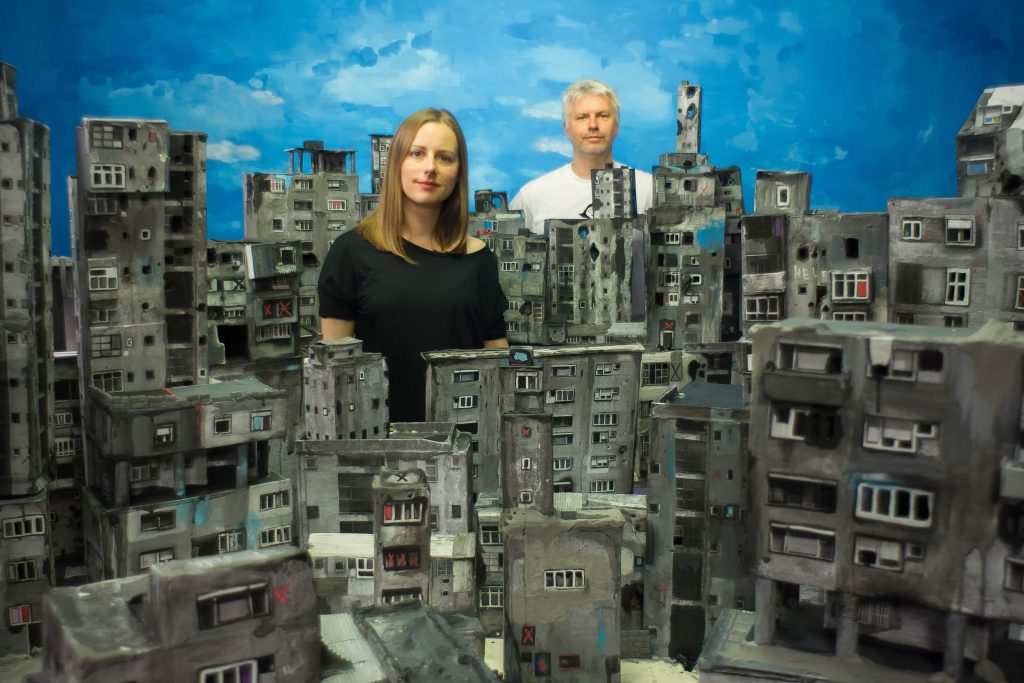 According to Nedeljkovic, people’s prejudice toward animation as a childish or naive way to tell stories has given the duo room to play around with darker political realities, as well as their own personal traumatic experiences.

“With the internet, we can see real life documentary images of war, fighting and dead bodies from the comfort of our homes, and we’ve become too used to it,” she says. “But seeing something animated, it’s easier to reach the audience and share the message.”

Madjak began his career as a news and documentary filmmaker, following the conflict across Serbia, Bosnia and Herzegovina and Kosovo from behind a camera. Now, he has been part of the animation scene in Belgrade for the last twenty years, and he and Nedeljkovic are using their experiences during the ‘90s to capture the shared political reality that resonates not just in Serbia, but all across the Balkans, through their animated films.

Untravel, Madjak and Nedeljkovic’s second stop motion animated film, follows the story of a young woman and her friends living in an unnamed “small, isolated country” surrounded by a huge red wall. They dream of leaving to a land of infinite opportunity, named only ‘abroad’: a place full of promise, with beaches, luxury hotels, huge salaries, human rights and gender equality.

The main characters may look familiar if you have seen Nedeljkovic and Madjak’s previous work. Their first film, Rabbitland, is the story of a wasteland painted pink, populated by rabbits with holes where their brains should be. The rabbits’ country is under the control of a group of ‘evil girls,’ almost identical to the protagonists in Untravel, but are female dictators who tell the rabbits they are happy, organizing free and well-ordered elections that take place every single day to keep them busy, the “sign of a good democracy.”

Nedeljkovic has built her animated universe around her evil girls, puppets that she first created while studying at the Faculty of Fine Arts in Belgrade back in 2005. “We had to activate the evil girls again for Untravel, they are recognizable and strong female characters that would carry the story,” she says. “But their first version was very ugly and strange, so we spent a lot of time turning them into a character that people would trust and believe their story.”

Nedeljkovic says that these girls have helped her tell very personal stories, tackling the reality of a predominantly male, ex-military political elite that has captured states around the Balkans. “It was important for our dictators to be female, as it inverted the story and in a way made the message even stronger,” she says.

Untravel ends with the girls, afraid to cross the border of their small, isolated country, taking each other’s hands and jumping across the red dotted line, only to find nothing on the other side. Before the viewers can find out what happens next, everything goes black, and the words ‘THIS CONTENT IS NOT AVAILABLE IN YOUR COUNTRY’ is scrawled across the screen.

She and Madjak realized only after they had made Untravel that it could be interpreted as a prequel to Rabbitland.

“The girls were born and grew up in these big grey cities, struggling with isolation and political issues, but at the end of the film they escape, and probably a few years later they begin to build Rabbitland in this no-man’s land that they found,” says Nedeljkovic. “Living in isolation, both mental and political, has a lot of consequences, and in the case of the evil girls, their response became ironic, critical, and [building their own dictatorship] became the best way for them to deal with their situation.” 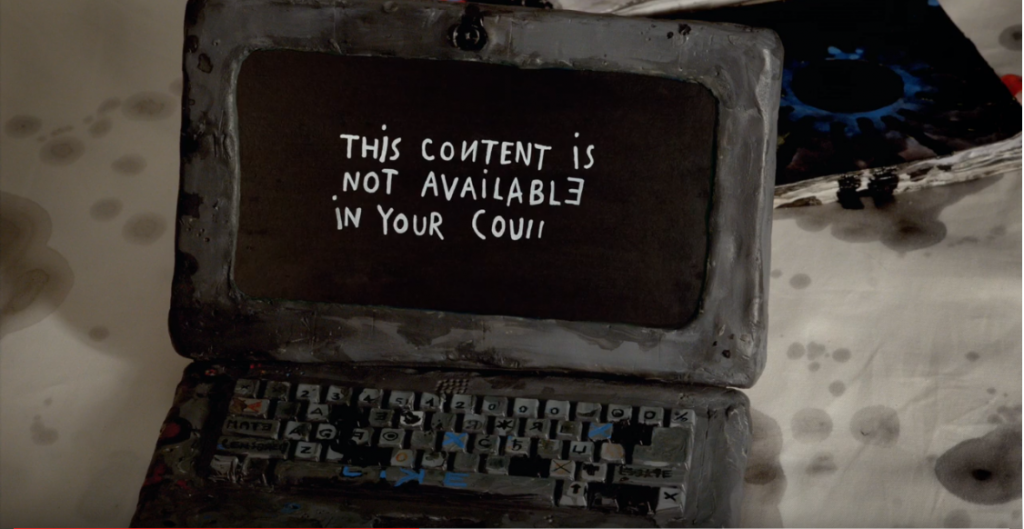 A sobering end to the film, Nedeljkovic hopes that it expresses the importance of staying critical and opposing political realities that can very easily be sustained.

“For Untravel we realized that we couldn’t have a real ending for the film, there is no end to this in sight, and we cannot offer any kind of solution, so we decided to leave it open. Cutting the film off and saying ‘this content is not available in your country’ really worked, especially in the Balkans. Borders exist even on the internet,” she says.

One of the greatest challenges for Madjak and Nedeljkovic was building a story that would be able to resonate locally and internationally. They had trouble keeping up with the atrocities that were appearing on the news across the globe in real time as they were making their films.

“During the production of Rabbitland and Untravel, Trump decided to build a wall across the border with Mexico, the migrant crisis in Europe happened and fences were being built around Hungary, we began to be afraid that reality was becoming a better script writer than we were,” says Nedeljkovic.

According to Madjak, their films are informed by their lived-in reality of staying in Serbia following the dictatorship and the wars of the 90’s, one that can connect with audiences at Dokufest as well.

“For a while, we had a sort of democracy that did not succeed. There was optimism during that period, but the people who were responsible for the war in Yugoslavia came back in droves and there is no optimism anymore,” he says. “There is corruption and unemployment, insecurity, it’s getting worse and worse. There is no war, fortunately, but on the other hand, there is depression, depression about what comes next.”

Their films are always open enough for people to feel and see in them their own experiences, he says. “With documentary films, you could expect this kind of story, but in animation, you would not. That’s why we are doing this.” 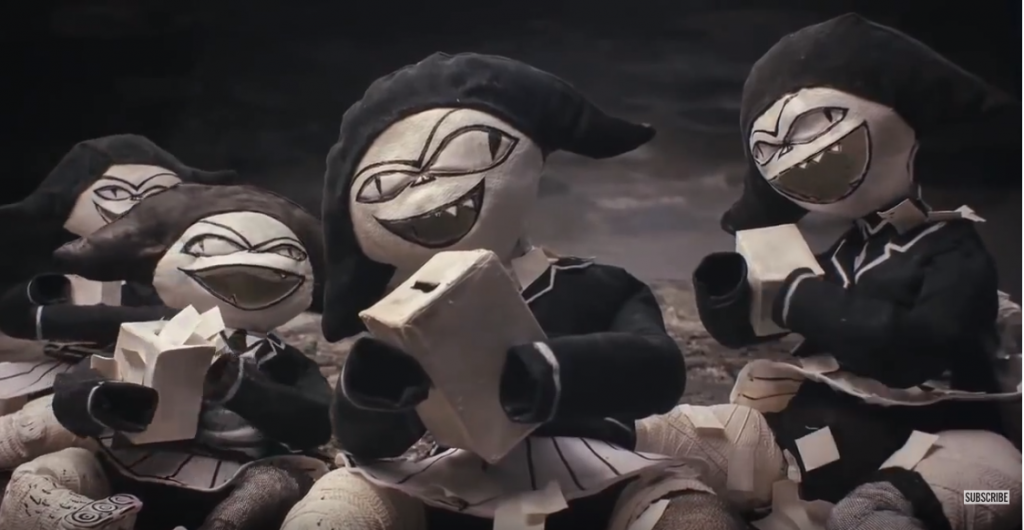 The ‘evil girls’: still from Rabbitland.

Madjak and Nedeljkovic’s next film, Money and Happiness, will be tackling this idea of depression head on, particularly its relationship with economic instability.

“In Serbia and in the region, politicians present their countries as developing, having huge economic growth, showing statistics all the time that prove how it’s growing,” said Madjak. “But you just have to look around and you see examples that raise questions about how true this really is.”

For this reason, Nedeljkovic and Madjak decided to make a film exploring how economics are presented by the state, measuring the success of a nation through its GDP while people remain unhappy and in precarious economic situations.

“If I have to define our political system and mindset, we have this sort of dictatorship of happiness,” she says. “We are forced to be happy no matter what, and most of us, honestly, are just pretending. We have to ask ourselves, what is really behind that?”

by Aidan Hehir
Next: Features

Screening ‘pieces of our everyday life’