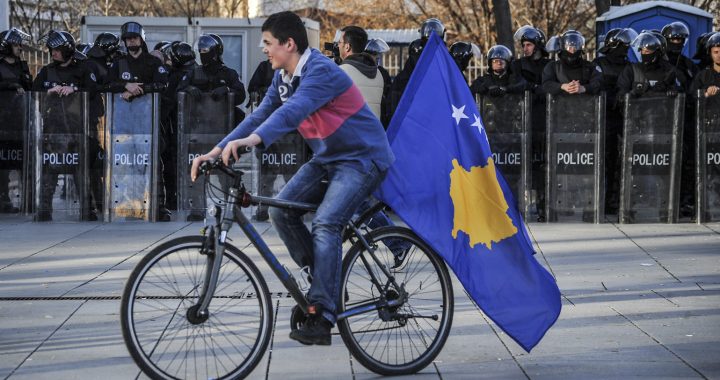 February 17, 2016, Tens of thousands of protestors march in Prishtina on Kosovo's Independence Day, asking for two controversial agreements with Serbia and Montenegro to be scrapped and for the government to resign. | Photo: Atdhe Mulla.

Aidan Hehir writes that the upcoming snap elections could break the hold of the old political guard and bring much needed change for Kosovo citizens.

The forthcoming elections expected to be announced this month come at a critical point in the history of Kosovo. Some may argue that the elections couldn’t have come at a worse time; Kosovo is in the midst of a series of internal and external crises, and the inevitable disruption caused by both the election campaign and the formation of a new government will, by definition, compromise political and societal stability.

But, the quest for stability – for so long the primary goal set for Kosovo – has paradoxically produced little more than stagnation, if not regression. What Kosovo needs now more than ever is not stability, it is change.

Stability is, of course, in many ways desirable. States boasting economic growth and functioning political systems are characterized by stability. But so too are authoritarian regimes and captured states. So while Sweden and Denmark are stable, so too are North Korea and Belarus. Stability is not, therefore, inherently good.

Since 1999 the goal set for Kosovo by its many external patrons has been stability, narrowly understood as the absence of internal and regional conflict. With the exception of the 2004 riots, these goals have been largely achieved. Kosovo is not a particularly dangerous place, nor has it proved to be a danger to its neighbours. The fear expressed by many in 1999, and indeed following the declaration of independence in 2008, that Kosovo would implode or cause a chain reaction of violent secession, has proved unfounded.

And yet, Kosovo suffers from a crippling array of problems; high unemployment, mass emigration, poor healthcare, an inadequate education system, and environmental degradation. At the root of all these issues is the problem that has endured, and in fact grown, in Kosovo for the past twenty years; corruption. Kosovo has become an archetypal captured state, where a corrupt elite have sunk their claws into every aspect of Kosovo’s political, judicial, and social systems.

On the international stage, Kosovo has seen its status decline rather than improve. While Majlinda Kelmendi’s Olympic gold medal in 2016 and Kosovo’s football team’s admission to FIFA has brought some national pride, Kosovo’s quest for international recognition has stagnated, if not gone into reverse. Attempts to join Interpol and UNESCO were foiled by a counter campaign launched by Serbia, while in recent years some states have revoked their recognition of Kosovo’s independence.

Kosovo’s external patrons – primarily the US and the UK – may have once been able to promote Kosovo internationally and push for its recognition, but in recent years their power has declined in relative terms, and each have become increasingly inward looking. In short, Kosovo’s international friends have many more pressing priorities. Indeed, while the words of support and encouragement continue to flow forth from the American and British embassies in Prishtina, one may well wonder at how useful these sentiments are given the systemic problems that still persist, as well as the fact that Kosovo’s citizens must still apply for visas to travel in the EU Schengen zone, and the prospects of Kosovo joining the EU are distinctly remote.

Indeed, Kosovo appears increasingly to be seen less as a brave new state deserving of international support, and more as a problem impeding the progress of its neighbors.  Kosovo was thus essentially forced to ratify a border deal with Montenegro to enable its neighbor to move closer to EU integration, while the talks with Serbia appear to be weighted in favor of Belgrade. The priority of the international brokers involved in the Kosovo-Serbia dialogue appears to be ensuring that Serbia can contrive some formula – short of full recognition of Kosovo – that will enable it – not Kosovo – to progress towards EU accession. It is surely telling that we are now witnessing a situation whereby Serbia’s progress is deemed more important to the West than Kosovo’s.

Kosovo’s politicians have, to date, been primarily concerned with two things: increasing their power and privileges within Kosovo, and bending to the dictates of external sponsors. The two are, of course, linked; the corruption within Kosovo has essentially been tolerated by powerful Western states so long as Kosovo’s political elite have agreed to maintain internal order and accede to the political interests of the internationals. The perverse and self-defeating nature of this arrangement reached its zenith when President Thaci appeared to support an international plan to carve up Kosovo’s borders along ethnic lines.

After over twenty years of the most ambitious, and invasive statebuilding project ever launched, Kosovo is in a perilous state. Something surely has to change, in terms of both internal governance, and Kosovo’s stance on the international stage. The forthcoming elections could well precipitate both.

Kosovo cannot hope to attract much needed international investment if it is governed by a corrupt elite. Kosovo cannot redress the tide of emigration, repair its broken healthcare and education systems if its political leaders squander tax-payers money on needless vanity projects that ultimately only feather the nests of an already wealthy cabal. Likewise Kosovo cannot hope to consolidate and/or improve its international status, if its leaders allow their country’s foreign policy to be dictated by external powers, while its foreign ministers focus exclusively on the forlorn, and largely meaningless attempt, to win some more recognitions.

The time has come, surely, for Kosovo to spend less time asking others to treat it as an independent state, and more on behaving like one.

Kosovo must also, surely, do more to change the dynamics of its relationship with Serbia; the reality is that Serbia is succeeding in presenting itself as a more attractive partner to the West than Kosovo, despite the fact that it has done so little to atone for its past crimes. Kosovo could redress this trend if a new government articulates a position which confronts the EU with Serbia’s persistent divergence from the EU’s own principles on media freedom, transitional justice and judicial independence.

Thus, while the elections will undoubtedly cause a degree of uncertainty and contestation, they also hold the prospect of a new direction, one which Kosovo badly needs. We must hope that the electorate seize this opportunity to break away from the old guard and forge a bold, new path for Kosovo.