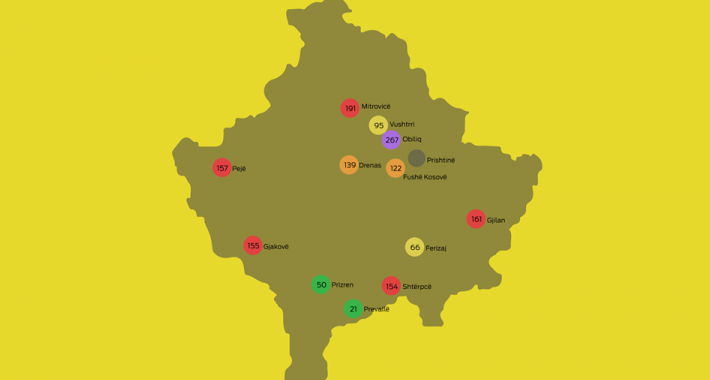 The vulnerable points on the map: Kosovo’s air pollution and its causes

From healthy to hazardous, Kosovo has upped its monitoring of the decline of the county’s air quality in the last few years. An infographic from BIRN’s own monitoring team illustrates the dangers and explores the solutions of this phenomenon.

The alarmingly high levels of air pollution recorded over the past two years in Kosovo, particularly in Prishtina, have posed a serious threat to the health of citizens.

Official air quality measurements have been conducted by the Hydrometeorological Institute of Kosovo, and have published their recent findings on the website kosovo-airquality.com, which includes measurements from eight different locations across the territory of Kosovo.

However, the measurements that prompted the strongest reactions from citizens and institutions were initially made by the American Embassy in Kosovo, who use their own air quality monitors that measure the air from the Embassy in Arberia.

In the meantime, two more air quality monitors were installed in Prishtina as a response to the alarming air quality levels recorded by the Embassy. Their measurements ​​have recently been published on the AirVisual web site, the largest air quality community monitoring platform in the world. One of these monitors is located in the Aktash neighborhood, measured by software company, 3CIS, and the other monitor was installed  by the non-profit organization ‘BONEVET’, located near the train station. The information on the AirVisual website on Kosovo’s air quality index, or AQI, informed Prishtina citizens in real time about the air quality for these respective parts of the city.

According to these three monitoring bodies, the pollution levels have exceeded healthy limits several times during the winter months of this year.

As Prishtina’s air is already being monitored on a regular basis and its data is published on the  AirVisual website, which combines the values from the abovementioned stations in different neighborhoods of Prishtina, the BIRN team has taken the initiative to measure air pollution in other cities in Kosovo.

From measurements that have been conducted in Mitrovica, Vushtrri, Fushe Kosove, Gjilan, Ferizaj, Strpce, Gjakova, Peja and Drenas, the results have concluded that on top of the capital, there is a high level of pollution in other locations in Kosovo. In Mitrovica, the measurement made during January showed unhealthy levels of pollution, reaching the level of AQI 191.

In Obiliq, the pollution was even higher during January, reaching 267, which according to the Air Quality Index is considered hazardous.

Also, in Peja, Gjakova, Strpce and Gjilan throughout January and February, the level of pollution also reached unhealthy levels.

Prizren and Prevalla were the only locations that showed healthy levels of air quality.

These measurements were not made simultaneously,  and were recorded over a short period of time. This means that these values ​​are not representative of the long-term situation and are not comparable. However, they represent a snapshot of the air quality in these cities at a random time and date.

Usually, these measurements were made in the city centers or locations with high human traffic. Meteorological conditions such as temperature, air humidity, atmospheric pressure, wind, and many other factors have a high impact on air quality and have the ability to improve or aggravate it.

Different day times affect air quality, some time periods tend to have increased traffic, or more activities that release pollutants, such as heating stoves and electricity use, which means that higher levels of pollutants are released.

So, these values ​​should not be seen as predicting an accurate average of air quality levels for these locations over extended periods of time. Air quality may change within a short period of time, and the impact of these gases on the health of citizens is determined mainly by lengthy exposure. Long-term, daily, monthly, and yearly analyses provide a better insight into the state of the air quality and its impact on the health of citizens.

The figure shows the points where the measurements and relevant air quality values ​​of these measurements were made. These values ​​are known as the Air Quality Index. This index calculates the micrograms per cubic meter of 5 air pollutants, specifically carbon monoxide, ozone, sulfur dioxide, nitrogen dioxide and particulate matter, PM, particles.

The Air Quality Index measures the concentration of these pollutants and translates them into air quality levels on a scale of 0-500, marking the levels as as ‘good,’ ‘moderate,’ ‘unhealthy for vulnerable groups,’ ‘unhealthy,’ ‘very unhealthy’ or ‘hazardous.’

While the infographic below explains pollutants in Kosovo and their main sources, it also contains information on the effects of the pollutants on human health, the values ​​of the Air Quality Index and their meaning, as well as the measures to be taken so as to lower the level of air pollution.