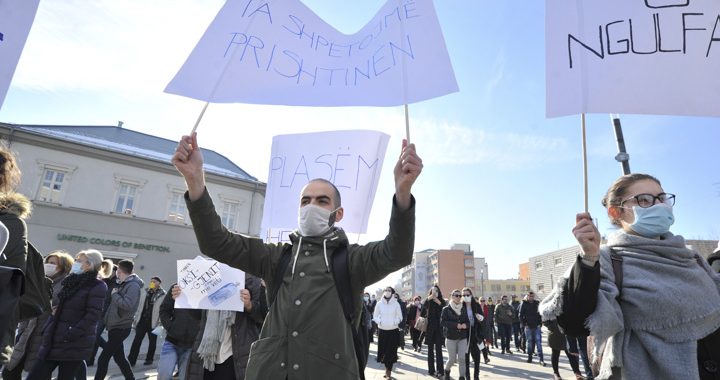 Citizens protested in downtown Prishtina, demanding a solution to high levels of pollution in the capital. | Photo: Atdhe Mulla.

On Monday, Prishtina peaked the global air quality index rankings as the most polluted city in the world for its citizens’ exposure to hazardous levels of particulate matter.

Drawing from the data provided by the US embassy Air Quality Index in Prishtina, AirNow, two major peaks in exposure to hazardous levels of particulate matter occured in November, with both Skopje and Prishtina landing in the top ten most polluted cities in the world on Monday.

Lahore, an industrial city and the second largest in Pakistan, consistently holds the number one spot for hazardous air quality, and suffers from the same ‘temperature inversion’ as Prishtina, a meteorological condition that traps polluted air in the city, not allowing harmful emissions in the air to rise and be carried away.

The air quality monitors track the levels of 2.5 particulate matter in the air.

The harmful particulate matter concentration in Prishtina on Saturday was recorded at the same hazardous levels by the Kosovo Environmental Protection Agency, AMMK.

Particulate matter of this size, 2.5 micrograms in diameter, easily enters the respiratory system and the bloodstream, making it the most harmful pollutant and those who inhale it more susceptible to cardiovascular and respiratory diseases, according to the World Health Organization, WHO.

Founder of the Kosovo Foundation for Open Society, KFOS, Luan Shllaku was among the first charged with monitoring the air quality as part of the directorate of the Institute for Environmental Protection alongside the UNDP in Kosovo during the 1980s, who explained that these high rates of pollution are nothing new.

“It’s been the same for the last 3 or 4 decades,” he said for Prishtina Insight. “From coal and chimneys you also get particulates double, triple, quadruple the size, and they’re just as dangerous, but the US embassy instruments don’t measure them.”

However, in 2017, Prishtina Insight found that the levels of pollution recorded by the government were inexplicably lower than that provided by the US embassy.

Last year, Prishtina’s mayor Shpend Ahmeti said that the embassy’s location in Arberia explains the difference in air quality data. Arberia is the residential neighborhood in Prishtina that is closest to the coal-fired power plants in the town of Obiliq, 10km away from Prishtina.

Regardless of the location, the main source of harmful emissions remains obvious, said Shllaku.

“We don’t need any more proof, we can see it’s coming from the thermal power stations,” he said.

The Balkan Green Foundation and the Institute for Development Policy, INDEP, launched a campaign last Friday, November 30, to raise awareness of the concrete measures that the Kosovo government and policy makers should take to improve the air quality.

So far, they have issues recommendations to limit the age of cars imported to Kosovo to restrict emissions from vehicles with outdated filters and to reform the public transportation system, also highlighting the need for the government to publish more reliable data on Kosovo’s air pollution.

“The Government of Kosovo, through the Environmental Protection Agency, claims they have more monitoring devices, more indicators they measure, and more data on the levels of air pollution, however, their publication leaves a lot to be desired,” the Balkan Green Foundation stated on their Facebook page. “Transparency on our health is not an alternative.”