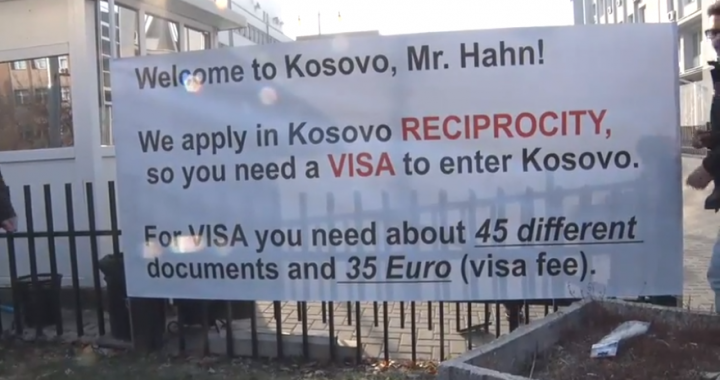 Through a symbolic activity, citizens in the center of Prishtina ‘requested a visa’ from European Commissioner Johannes Hahn, referencing visa requirements for Kosovo citizens in the Schengen area.

“Welcome to Kosovo, Mr. Hahn. We apply reciprocity in Kosovo, so you need a visa to enter Kosovo. For visa you need about 45 different documents and 35 euros (visa fee),” a sign placed outside of the Kosovo government building in Prishtina on Monday morning reads.

According to Drenori, the message on the sign serves to express dissatisfaction over the European Union’s approach towards Kosovo citizens regarding the visa requirements to travel within Europe’s Schengen area.

“This approach is unacceptable because we do not deserve to remain the only [country] in Europe and the Balkans without visa [liberalization],” he said. “If we have failed as a state, part of the guilt lies with EU countries because they helped with the liberation and independence of Kosovo, so it is unjustifiable that all the blame is thrown at us for not fulfilling the criteria,” he said.

He said that if the EU thinks that Kosovo politicians are corrupt, then they should not cooperate with them.

“If they think that our political elite is corrupt, then they should not work with them and harm all of the citizens because of a few leaders. We are dissatisfied, this is a symbolic act and we think that Mister Hahn should receive this message,” Drenori said.

Hahn will meet with Kosovo President Hashim Thaci, Prime Minister Ramush Haradinaj, and Assembly Speaker Kadri Veseli regarding the EU’s Council of Ministers, the EU’s main decision making and legislative body comprised of government ministers from each member state, where Hahn will request the withdrawal of the 100 per cent import tariff on Serbian and Bosnian products imposed by the Kosovo government after his discussion with Kosovo officials.

Hahn has also announced a meeting with Serbian President Aleksandar Vucic on Monday before he comes to Kosovo.

On November 21, Kosovo’s government cabinet increased the previously set import tariff by 100 per cent, effectively stopping all imports from Serbia and Bosnia and Herzegovina into Kosovo.

According to Serbian deputy prime minister Rasim Lajic on November 19, Serbia will not commit to the dialogue for normalization of relations in Brussels with Kosovo until the Kosovo government withdraws its 10 per cent increase, set on November 9, of custom tariffs for all products imported from Serbia.

A European Parliament plenary session in September voted to confirm the decision to enter into interinstitutional negotiations for Kosovo’s visa-free regime, pushing Kosovo one step forward towards visa-free travel in the Schengen area.