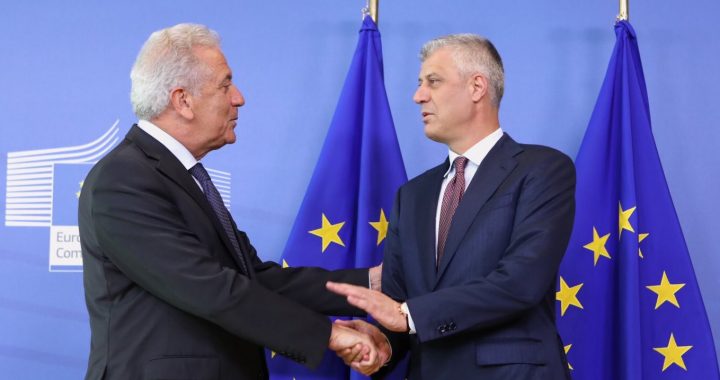 The last meters of a long mile

Wary Kosovars are not jumping with joy about the visa liberalization recommendation, but the European Commission’s proposal marks a milestone nevertheless.

Yes, we are still discussing visa liberalization, nearly a decade since Kosovo’s neighboring countries (all of which share our problems) earned the right to move freely in the Schengen zone.

On Wednesday, the EU Commissioner on Migration, Home Affairs and Citizenship, Dimitris Avramopoulos, confirmed that Kosovo has met all visa liberalization benchmarks on a rather challenging and unique roadmap containing very debatable political criteria.

A whole new level of EU conditionality was applied in the case of Kosovo’s visa liberalization process – in particular, the demarcation agreement with Montenegro. Although perhaps lacking a clear prospect for membership, the visa liberalization process was the only avenue for the EU to include demarcation with Montenegro for the sake of crossing off their list a potential source for another dispute in the region. This caution once again proved that the EU’s stability and security approach in the Western Balkans has often undermined the importance of political reforms in the region.

Following this logic, in the case of the visa liberalization process with Kosovo, demarcation and political unrest in Kosovo shifted attention from corruption and organized crime – which in my opinion should have been the core criteria of the process.

The focus on demarcation as a criterion resulted with six ‘strong men’ – often linked to corruption and organized crime – travelling to Brussels to receive the good news and claim the credits for the EC’s positive remarks.

This made all Kosovars wonder: is this the same EU that constantly asks for tangible results in fighting organized crime and corruption? But this is not the only reason why Kosovars received the good news with skepticism.

The EC’s resumed proposal is indeed a milestone for the Kosovo government, as it celebrates for the second time its ‘success’ in moving the country forward. At the end of the day, everyone got something to ‘brag’ about, starting from the LDK – PDK coalition government in 2016, to Ramush Haradinaj (who back in the day was protesting in the streets against the demarcation deal) and his extensive coalition of political parties that rule the country in 2018. Little did we know, Kosovo only got the consent of the EU Commission, meaning that we passed only 1/3 of the exam, and we still need to work hard (perhaps even harder) to run the last meters to the finish line. The final steps of the process will certainly be painful given the current constellation and mood within the EU, and the perceived threat from migration.

Lack of enthusiasm among Kosovars can be explained simply by the low trust toward the political elite since they falsely and shamelessly promised visa liberalization to the citizens from 2014. This also applies to the EU constantly adding more criteria throughout the process and the perception that the EU is intentionally dragging their feet and side-lining visa liberalization for Kosovars.

The EC’s announcement coincided with another important meeting – that of Serbian President Vucic and Kosovar President Thaci in the framework of the EU-facilitated dialogue. It immediately raised the question among Kosovars, What was traded in Brussels? Such a question  is a result of a complete lack of trust in both the Kosovar government and the EU.

On multiple occasions, political leaders in Kosovo have linked the visa liberalization process to the dialogue with Serbia. Being under pressure to deliver to citizens, Kosovo politicians did not hesitate with attempts of ‘blackmail’ towards the EU, claiming that they would withdraw from the dialogue if the visa liberalization process did not move forward. This has provided solid ground for citizens to believe that there is a potential correlation between what is discussed between presidents of Kosovo and Serbia behind closed doors and the positive opinion provided by the EU Commission.

What if this is a false alarm again? Following the extraordinary celebrations back in 2016 when the EU Commission  gave the green light accompanied with two conditions, on Wednesday many wondered if this was similar. The internet was abuzz with memes from ‘the situation room’ of 2016: government officials eagerly watching the news and all of a sudden jumping out of joy and popping champagne. Two years later, there is a fear that it will take years for us to ditch the embassies and be rid off offensive visa application procedures.

How long will it take? Since visa liberalization is an extremely discussed topic in the media, citizens are thoroughly informed about the decision making processes within the EU when dealing with visa liberalization. Taking into account the fact that EU bureaucracy rarely reacts or delivers immediately, there is a fear that Kosovars will not move freely in the Schengen zone before January 2019 – and even that is the best case scenario.

How do we get the skeptics and non-recognizers on board? Another concerning issue is the European Council, assuming the EU Parliament will support and proceed with the EU Commission’s recommendation in September, and whether we will make it to the EU Council’s meeting in September at all. If it does happen, getting key member states on board is a rather difficult diplomatic task. In this case we are not only challenged by the non-recognizers who traditionally do not support Kosovo, but even by key member states such as Germany, France and the Netherlands, considering the fact that the fear of migration is still prominent.

Putting aside all skepticism and doubts about the next steps, the EU Commission’s opinion matters and marks a milestone in the visa liberalization process for Kosovo. It is only a matter of time until Kosovo not only joins the neighbouring countries in the so-called EU white list, but also puts an end to the country’s unfair isolation.

As to the Government of Kosovo, credits and celebratory thanks should only be given once the process really ends. This reminded me of a quote from Jean de La Fontaine: “Never sell the bear’s skin before one has killed the beast.” Early celebration will not help the process, now it is the time for our diplomacy to be proactive and reach out to the member states ensuring that this issue is placed high on the agenda, and guarantee their support. After all, this is the biggest ‘carrot’ that Kosovo can gain in relation to the EU. We should use this momentum wisely.