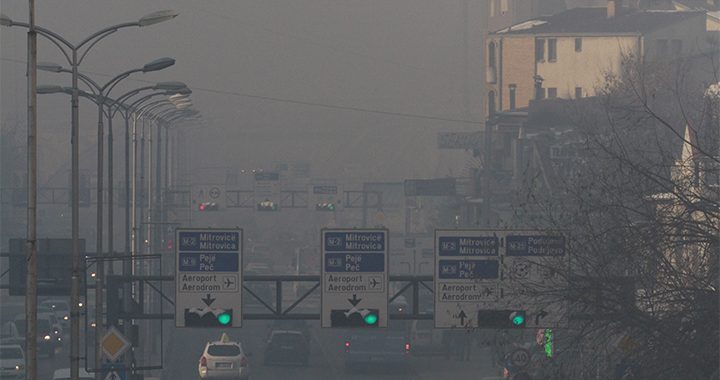 Seeing through the Prishtina haze

Panic aside, pollution in Kosovo is a year-round problem without a silver bullet. There are no shortcuts to dealing with it.

Kosovo’s political elites are slowly dropping their previously much-used phrase “we have far greater problems than the environment.” Regardless, judging by the way the central government and municipalities have been handling this year’s air pollution episode, the disregard for environmental issues–and consequently for our wellbeing–may be here to stay.

Addressing the members of the Kosovo Assembly during last week’s extraordinary session on air pollution, the Minister of Environment and Spatial Planning, Albena Reshitaj, stated that she does not know what the main source of air pollution in Kosovo is. The Minister told the Assembly members, who were each naming their pollutant of choice, that state institutions should not speculate, but rather base their policy decisions on scientific facts and thorough research.

There are at least three problems with this otherwise sensible statement.

Beware of scapegoating and half-hearted measures

Minister Reshitaj said that she does not believe in pointing fingers at potential polluters without having the necessary evidence. It is ironic then that in the past few weeks Kosovo authorities have been vocal about residential heating as a key culprit of air pollution. They have encouraged people to use wood over coal, under the assumption that the first choice is cleaner.

Luan Shllaku and Zeqir Veselaj, two of Kosovo’s most renowned experts in the field of environmental protection, have already pointed out that this position is not based on facts. Both coal and wood impair air quality by emitting, among other things, breathable particulates and nitrogen oxides. But that still does not make them the main contributors to air pollution.

The WHO has raised concerns over governments incentivizing and subsidizing wood combustion for residential heating, a tendency they attribute in part to the public perception of wood as a ‘green’ option. The fact of the matter is, replacing coal with firewood will likely have an insignificant effect on improving air quality, and possibly even no positive effect at all. It will, however, pose a financial burden for households, and an ecological burden on Kosovo’s forests.

In this light, the decision of the Municipality of Prishtina to ban the sale of coal within city limits was rightly criticized by the Kosovo Council for Protection of Human Rights and Freedom. Those who could afford to stock their sheds in September/October are now heating their homes with coal. Those who have to live hand to mouth, on the other hand, may currently be suffering the consequences of this half-hearted and socially questionable measure.

Media like Kallxo.com who are encouraging readers to take pictures of people’s chimneys and post them online, however well-intended they might be, end up scapegoating individuals who most likely have no choice but to use coal, since it is the cheapest heating option.

On the other hand, how can people even tell from smoke whether someone is using ‘bad coal’ or ‘good wood?’ The last time I was able to infer meaningful information from the color of smoke was during the 2005 papal conclave.

Inaction in the name of uncertainty

The Kosovo government has had sufficient information to make informed decisions that could significantly improve air quality.

According to the World Bank, the main sources of air pollution in Kosovo are the Kosova A and Kosova B power plants. From KEK’s own reporting, we know that Kosova B exceeds emission limits set by the Large Combustion Plant Directive 2001/80/EC for dust (50 mg/Nm3) and nitrogen oxides (NOx) (500 mg/Nm3). According to KEK, mean emissions of dust for Kosova B in 2016 were 377 mg/Nm3, whereas mean NOx emissions were 821 mg/Nm3. Refurbishing Kosova B has been a topic of discussion for a long time now, so why has this not been taken care of yet?

We also know for a fact that nitrogen dioxide emissions (NO2) in Prishtina exceed WHO and EU limits up to three times during winter. Managing NO2 emissions requires reducing the number of motor vehicles in cities, and especially those that run on diesel.

Regardless of whether emissions from motor vehicles are the first, second or third largest contributors to air pollution in Prishtina, it should be clear that they are a big part of the problem. If we have learned anything from Volkswagen’s ‘dieselgate’ scandal, it is that even modern diesel cars that meet the highest ‘Euro 6’ standard emit far more NOx than we have been led to believe. Modern diesel cars even surpass emissions from buses and trucks in the EU, since the latter have undergone much stricter testing procedures.

Up to now, when our politicians have spoken about tackling pollution from motor vehicles, they primarily referred to managing the ‘quality of diesel.’ This focus on quality obscures what should be obvious: there is no such thing as good quality diesel when it comes to our lungs. We urgently need to make sure we burn less of it.

The question ‘what is the real source of air pollution?’ suggests that we are not interested in understanding and dealing with air pollution in its technical and political complexity. Instead, we want to find a silver bullet. Unfortunately, there is no such thing, and the Ministry of Environment should know that.

Air pollution is a year-round problem. It is also a structural issue, and it needs to be tackled as one. Air pollution mitigation measures are likely to affect certain groups of people disproportionately. We should be wary of false dilemmas, such as wood vs. coal, or new cars vs. old cars. We should also resist the urge to oversimplify the matter, trying to find that one, real culprit. Costly and experimental ‘smart trees,’ while appealing in theory, are probably not going to cut it, either.

Bleta Arifi is a doctoral candidate at the Institute for Environmental Social Sciences and Geography, Albert-Ludwigs University of Freiburg.