Prior to their first-ever show in Kosovo at Lumbardhi this Wednesday, Prishtina Insight talked to Ryan Mahan from the post-punk band Algiers.

Presented by the No Recess gig-series, American band Algiers will be performing at Kino Lumbardhi in Prizren on February 7.

Algiers are midway through their European tour following the release of their second studio album, “The Underside of Power.” The band will be stopping in Prizren–which will be their first time in the country–after multiple fans, who saw them live abroad, lobbied for a tour date in Kosovo.

“So many people got in contact with us about playing in Kosovo, and really recommended we come to Prizren,” said Ryan Mahan, the bassist for Algiers, over the phone. “It just made sense to play here. It makes a difference when people really want you to come and perform.”

We try to use sonics to bring out feelings, particularly historical feelings.

Trying to get some rest after an intense show on Sunday in Bucharest, Romania, Mahan said that Algiers–made up of Mahan, Franklin James Fisher, Lee Tesche, and British-born Matt Tong, formerly a member of Bloc Party–have made the most of their time in Europe, despite having a show scheduled for almost every night of the tour.

“We had to go to Dracula’s castle when we were here in Romania, and we drove to Croatia just to check out the memorial to the victims of fascism at Podhum,” he said. “Particularly as Americans, there are so many fascinating things for us to see.”

When they’re not gathering energy for the next show, they’re quickly trying to fix broken equipment, or scrambling to find some new gear when it’s broken beyond repair, which happens more often than not.

“Our shows can get pretty intense. Coming to see us is a kind of all-encompassing, immersive experience, for us and the audience. The performative aspect of what we do is pretty important,” said Mahan.

Algiers draw together African American folk music and work songs with post-punk and noise. “We try to use sonics to bring out feelings, particularly historical feelings, putting things together to try and articulate some of the issues that we’re facing.”

The band is also known for engaging in social and political critique in their music, and touring is an important element that informs their writing. 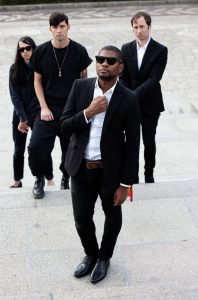 “We’re interested in seeing the world and understanding our place in it, so our music definitely comes from our engagement with the social space,” said Mahan. In Kosovo, the band will be playing at the refurbished Lumbardhi cinema, a cultural heritage monument salvaged by activists from privatization.

But the band is also curious to see Kosovo’s capital, home to George Bush and Bill Clinton Boulevards.

“I saw something about this statue of Bill Clinton in Prishtina online, it’s so surreal,” said Mahan. “When I think of Bill Clinton, his legacy in the United States is building up the prison industrial complex, bringing even more black Americans into the prison system and introducing draconian, racist laws. It will be interesting to visit somewhere that has such a different incarnation of an American political figure.”

It might be interesting for Algiers, who are coming to the Balkans for the first time and touring Romania, Slovenia, Macedonia, and Kosovo, to find out that about 75 per cent of Kosovars and 45 per cent of  Macedonians support current US leadership. The band, needless to say, does not.

“To be honest, I think people around the world have pity for those of us who didn’t vote for Donald Trump,” Mahan laughed. “Coming to our shows, I guess people want to give us a pat on the shoulder.”

“As a band we’re really interested in connecting with people around the world,” said Mahan. “Having the opportunity to tour anywhere is fantastic, but to be able to go places that are outside what the industry would call ‘major markets’ is what we’re really keen on doing.”

Algiers will play at Kino Lumbardhi in Prizren at 8:00 pm this Wednesday. Tickets are on sale for three euros in Prishtina at Dit e Nat, Soma and Miqt Pub, and for five euros at the door the night of the event.

Seeing through the Prishtina haze

by Bleta Arifi
Next: Big Deal