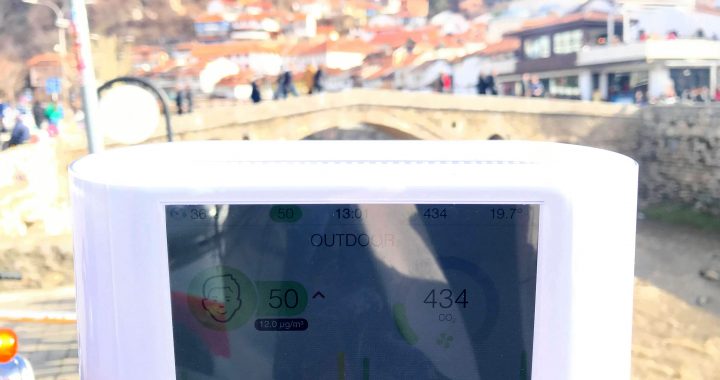 BIRN will be conducting air quality measurements across cities in Kosovo. | Photo: BIRN.

While Prishtina and other parts of Kosovo struggle with air pollution, BIRN air quality monitors found Prizren the least polluted municipality on Sunday.

Following numerous measurements of air quality levels in Kosovo municipalities in the last seven days, BIRN monitors in Prizren in the south of Kosovo measured healthy levels of air quality for its citizens, coming in at 50 on the air quality index, AQI.

According to the AQI, 0-50 on the scale does not pose any threat to health, even to sensitive groups such as young children or elderly people.

The BIRN team also measured the air quality in Prevalla, a touristic village in the Municipality of Prizren around 30 km from the city, where the air quality was even healthier, reaching 21 on the scale.

The Municipalities of Ferizaj, Mitrovica, Prizren, Gjilan, Obilic, Strpce and the village of Prevalla were also measured throughout last week. Almost every measurement conducted by BIRN returned ‘unhealthy’ results on the air quality scale.

At the same time as the air quality was measured in Prizren on Sunday, the level of pollution in Prishtina was ‘medium,’ measuring at 59.

In the last seven days, air quality in Prishtina recorded lows of 52 on Saturday, and highs of 272 on Thursday.

The AQI uses a six-marker scale of danger concerning the levels of air pollution, from ‘healthy’ to ‘hazardous.’ The index ranges from 0-500, and any city reaching levels higher than 300 is considered ‘hazardous.’

Air pollution levels in Prishtina peaked in December last year, and Prishtina was ranked as one of the most polluted cities in the world, with air quality levels as high as 456 recorded.

BIRN will be conducting air quality measurements across cities in Kosovo where monitoring stations such as those found in Prishtina, and general data on air quality, are unavailable, using probe monitors provided by AirVisual, the organization that has gathered the largest global database of air quality data by city since 2015.

This research, to be conducted over the next three years, aims to oppose the idea that Prishtina is the only city that has unclean air across Kosovo, and discover whether every city deals with poor levels of air pollution.