Ferizaj’s mayor attended an off-road jeep race that drove through the recently-restored riverbed of the Nerodime River, despite the race being in violation to Kosovo’s Law on Waters.

A few weeks ago, on a cool autumn Sunday, off-road racers revved their jeep engines at the Nerodime River in Ferizaj, known for its unique bifurcation phenomenon.  The race, held on October 8, was illegal: off-roading in riverbeds violates the Law for Protection of Waters, and the fine for holding such a race can be anywhere from 50 thousand to 100 thousands euros.

But this did not stop current Mayor Muharrem Svarqa from supporting the event and attending it as a spectator.

Municipal governments and the Ministry of the Environment and Spatial Planning are the responsible bodies for the protection of waters.

The Ministry of the Environment told Prishtina Insight that they were not aware of this event, which was organized by the group Off Road Kosova–Kastrioti. This is despite the fact that the mayor supported it, and advertisements for the Nerodime River race were made  public well in advance.

“The race with off-road vehicles honored us as an institution and as a city, and will remain a marked day in our history as the race that for the first time had its beginnings here,” wrote Svarqa on his Facebook profile.

He even inferred that he took part in the organization of this race.

“Together we showed that we can organize races previously unknown [to our public] and triumph in doing so. Our support [as a municipality] will never lack whenever there are good ideas from citizens of Ferizaj,” he wrote.

But when he was contacted by Prishtina Insight, Svarqa changed his statement. He said he did not take part in the organization of this race.

“The race with off-road vehicles was not organized under the patronage of the Ferizaj Municipality, but they only had our moral support. We did not analyze those rules, we do not agree with the violations of the law, but we only fed the passion of those who are fans of this sport,” said Svarqa. 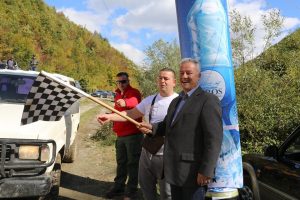 The Mayor at the finish line. | Photo: Muharrem Svarqa’s Facebook

The race was organized during the campaigns for the upcoming local elections, and now the mayor seems to fear that that this infraction will be used against him. Svarqa appealed to the Ministry of Environment to increase inspection of waters throughout all regions of Kosovo, and not to deal only with this case.

“These kinds of races are not organized only in Ferizaj. They are organized in other places too. This event increased Ferizaj’s economic turnover, because all of the participants spent money in our city,” he said.

The head of the Off Road Kosova club, Bashkim Muja, told PI that the Ferizaj Municipality did not support them financially, but were only invited as guests. He said that the race was organized with the club’s own expenses.

“We organize races in other places as well and this is the first time we are faced with legal problems. We invited the mayor [Muharrem Svarqa] to participate in this race as a spectator, to show our participants from Macedonia, Serbia, Montenegro, and Albania that we have a mayor; otherwise we took nothing from the municipality,” Muja said.

He said that it was too late when they realized they needed permission from the Ministry of the Environment.

“We did not organize the entire race on the river, but we only passed through it. The municipality did not help us with anything. We asked permission to hold the race from the Ferizaj Municipality, but they told us to go and ask for a permit from the Ministry. Since we had already invited our racers and already set the date for the race, we did not have time to go and ask permission from the Ministry,” said Muja.

The Law for the Protection of Waters states that water resources are assets of special interest and are the property of the Republic of Kosovo and protected by law. The law also protects water resources from pollution, overuse, and misuse.

According to the law, the waters cannot not become the property of any physical and/or legal body. Extraction, use, accumulation, change of flow, construction, as well as other actions towards water resources are also prohibited.

While, the Ministry of Environment and Spatial Planning is responsible for the protection of waters, municipalities also have their legal obligations when it comes to the protection of rivers that are part of their territory. 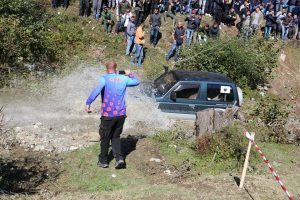 To use a river for an activity that goes beyond the authority of the municipality, one is required to obtain a permit from the MESP.

“We did not receive any requests regarding the organization of this event, neither from the organizers nor from the Ferizaj Municipality, or any other subject,” the Communications Department of the Ministry of Environment and Spatial Planning told PI in a statement.

According to the Ministry, they consider that in this case the Ferizaj Municipality committed a violation of the Law for Protection of Water.

“Furthermore, we inform you that an action [such as the one pertaining to the race] is considered a violation of the Law for Water Nr.04 /L – 147, specifically article 72 of this law. At the same time, we ascertain that the Municipality, which did not respect the procedures foreseen by law, has surpassed the competencies that fall under its domain of responsibilities,” the Ministry’s response said.

The Nerodime River flows from the Nerodime Mountain. This river is known for its bifurcation, the flow of river into two branches towards Sitnica River and Lepenc River, to further flow into the Black Sea and the Aegean Sea. This phenomenon is rare around the world.

by Nevena Radosavljevic
Next: News