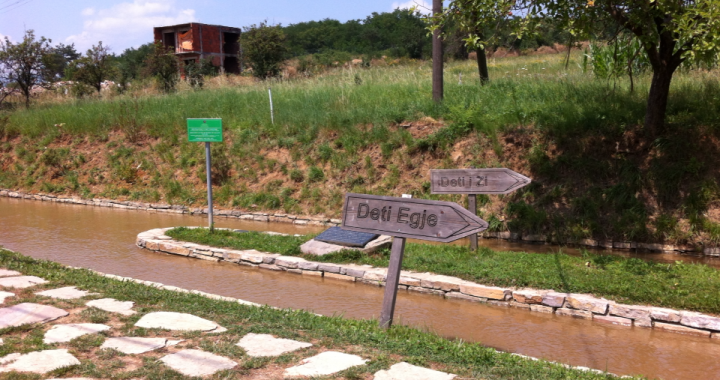 Authorities restore the bifurcation of Kosovo’s Nerodime river, unique in Europe, after years of neglect, pollution and careless construction.

Eighty-two year-old Avdyl Qerimi remembers being a young man and grinding grain into flour at the Ottoman era Nika mill, powered by the waters of the Nerodime river in south-eastern Kosovo.

For those like Qerimi, the Nerodime was a source of huge local pride, splitting at a point north-west of the town of Ferizaj into two branches that end their journeys in two different seas, a phenomenon known as bifurcation.

It represents the only case of bifurcation in Europe and one of only two in the world, the Orinoco in South America being the other. So it was particularly distressing to Qerimi, environmentalists and Ferizaj locals alike that years of neglect, pollution and illegal construction had left the Nerodime dry, its point of bifurcation a sorry sight of grass and mud.

Responding to public pressure, authorities excavated the riverbed and last month restored the flow of water and the bifurcation. Prime Minister Isa Mustafa, other dignitaries, environmental activists and Ferizaj residents attended a ceremony marking the restoration of the unique phenomenon, Qerimi among them.

“To be honest I can’t believe my eyes,” he told BIRN. “I would have never thought I’d see the bifurcation with water again. I was at the restaurant nearby for lunch 10 days ago, but in the two streams of the bifurcation there was not even a drop of water, just grass and thorns.”

Shaban Kashtanjeva, who named his nearby restaurant Bifurcation, said he looked forward to a revival in tourism.

“Many visitors come to see this natural wonder. Unfortunately, almost everyone went away disappointed,” he said. “Now the water has come back and the bifurcation is working, it’s a thing of wonder.”

Sending its waters to both the Aegean and the Black seas, the Nerodime bifurcation has enjoyed legal protection since 1979 as a ‘Special Nature Reserve’. But its status has been flouted for years with pollution and construction, disregarding the area’s environmental value and tourism potential.

Visiting Kosovo last summer, German geologist and palaeontologist Norbert Jost said he had expected to see the river split. “But I didn’t,” he said. “What’s worse is the fact that human factors had intervened in the bifurcation,” he said, describing its fate as “miserable”.

“The main reason why the bifurcation does not work is the extraordinarily bad condition of the river bed, the water being used without control and the emptying of springs as a consequence of cutting down trees,” Gashi told BIRN before the river flow was restored.

Tourism expert Zeke Ceku, a former head of the Kosovo Tourism Association, hoped for better times ahead: “The bifurcation is a part of (Kosovo’s) national heritage and a gem, a natural attraction for developing tourism,” he said.

Qerimi said he hoped even the mill he visited as a young man would grind grain once more.

“I believe that people will come to visit this wonderful and blessed place,” he said. “It’s great that the water came and the bifurcation was not left to dry up and be forgotten… But we need to preserve it now even more.”