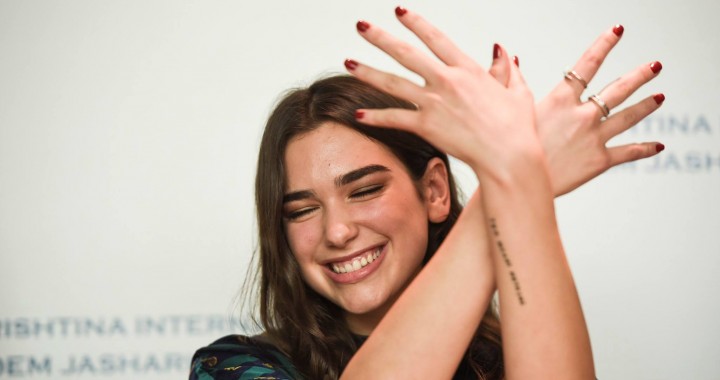 Traffic was blocked as 15,000 fans swarmed the Germia park in Prishtina where the pop star’s first Kosovo concert was held on Tuesday night.

Only a week after performing on the Late Night Show with Jimmy Fallon, Prishtina-born pop starlet Dua Lipa arrived in Prishtina for her first major concert. Lipa flew in with her entourage aboard the private jet of Kosovo millionaire businessman and politician Behgjet Pacolli just one day before her concert in Germia park on August 9.

Home is where the heart is ❤️

The 21-year-old rising star grew up and began her career in London, where she moved four years ago. Since the release of her first single “New Love” in August last year, the singer won over fans throughout Europe and the US, increasing her YouTube video views into millions, appeared in an ad for Stella McCartney, and made it to the BBC’s Sound of 2016 list.

The benefit concert in Prishtina was organized to support the Sunny Hill Foundation, a charity opened by Dua Lipa to support youth in Kosovo. All profits from the concert will go towards the foundation.

Prishtina’s roads leading to Germia Park in the city outskirts were blocked hours before the concert. 15,000 people attended the concert, according to the Kosovo Police. No incidents were reported.

The concert was opened by MC Kresha and Lyrical Son, two local Kosovar MCs. The main act followed late in the evening, singing her chart-topping hits including her latest hits “Hotter than Hell,” and “Last Dance.” She also sang unpublished material from her forthcoming album to be released in February next year.

Thousands of fans rejoiced when Lipa invited her father on the stage to sing together a rock song in Albanian which her father wrote and sang with his band ODA.

Stars as far as your eye can see ✨ singing my dads song & asked him to join me on stage! An unforgettable night… pic.twitter.com/n7r7b2vib8

Many fans, including Prishtina’s mayor Shpend Ahmeti, posted on social media to express their excitement.

From @dualipa to @majlindakel to @ritaora to SAINT #MotherTeresa, #Kosovo women rock the world. Far more than men. pic.twitter.com/fQApHXnrrf

KRENARE QË JOM SHQIPËTARE! 18 THOUSAND of you showed up last night! After 4 years of not being here to coming home to THIS!!!! I thank you all for the bottom of my heart for last night. I love you very very much! Best homecoming ever ?????

On Wednesday the singer was presented by Kosovo President Hashim Thaci with the Medal of Merit.

Correction:  A previous version of this article introduced Dua Lipa as “Prishtina-born.”  This has changed to ” The 21-year-old rising star grew up and began her career in London”.