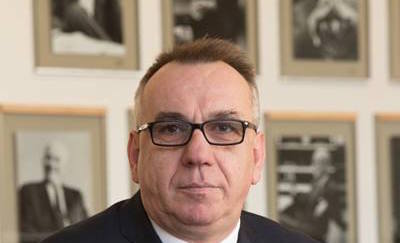 Enver Hasani, former president of the Constitutional Court, was found guilty of ‘white collar crime’ while serving as rector of the public University of Prishtina.

Former President of the Constitutional Court and rector of the University of Prishtina Enver Hasani was found guilty of fraud and sentenced with one year in prison by the Basic Court in Prishtina today. The sentence will only be executed if Hasani commits another criminal offense in the next two years.

The two other defendants in the case, Albert Rakipi and Hakif Veliu, were also found guilty and sentenced to six months of imprisonment each, but can bypass jail time by paying a 10,000 euro fine.

The three defendants will also have to compensate the University 70,000 euros in damages.

The three defendants are charged with acting as accomplices and committing fraud while in office. According to the indictment, the three defendants were complicit in fraud when they implemented a translation contract between the University of Prishtina and the Institute for International Studies, ISN, in 2012, during Hasani’s tenure as rector. At the time, Rakipi was director of the ISN and Veliu served as chief procurement officer for the University.

Three days later, Jorgji Qirjako, deputy director of the ISN, sent a request to Hasani asking to amend the contract and replace the unit “word” with “character,” raising the price from to 12.65 euros per 1,000 characters. This enabled ISN to benefit over 70,000 euros illegally.

Drita Hajdari, the prosecutor of the case, called the case “a white collar crime.”

According to the Code of Ethics, “committing a criminal offense, which has led to a sentence from a court, demonstrates clearly the unsuitability to continue being a member of the academic staff.”

“ORCA expects that the University takes fast, accurate, and severe measure in order to protect its image,” the organization wrote in a press release.

The three defendants will also have to compensate the University 70,000 euros in damages.

Correction October 18, 2017: A previous version of this article did not include that the three defendants are obligated to pay the University of Prishtina 70,000 euros in damages.