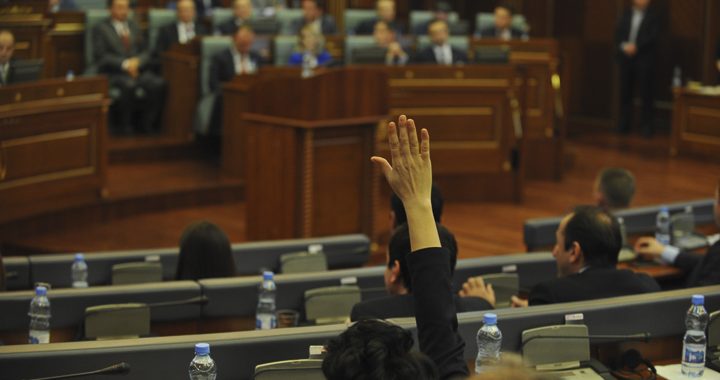 No confidence vote in the government scheduled

The chairmanship of the Assembly of Kosovo has unanimously decided to schedule a vote of no confidence in the government on August 22, which if passed would trigger snap elections within weeks.

On Monday, the Chairmanship of the Assembly unanimously decided that on August 22 an Assembly session will be held tabling a no confidence motion in the current government.

According to the Constitution, 80 out of 120 votes in the Assembly are required for a vote of no confidence to succeed, thus dissolving parliament and beginning the process of electing a new government. The moment the Assembly is dissolved, new parliamentary elections must be held within 45 days.

The heads of all parliamentary parties have expressed willingness to dissolve the government and head to the polls.

At a press conference held after the meeting of the Chairmanship, Speaker of the Kosovo Assembly, Kadri Veseli hailed the decision to hold the no confidence vote. “With this decision we are giving dignity to the people and hope to Kosovo citizens,” Veseli said, before congratulating the citizens for new elections.

Bilal Sherifi, the head of the parliamentary group for the Social Democratic Initiative, NISMA, told the press conference that any snap election would likely take place at the end of September or the beginning of October.

Sherifi reasoned the slight delay in holding the session as being due to the European Union suggestion that EU’s monitoring team should be in place for any snap elections, and allowing time for preparations.

Head of the LDK parliamentary group in the Assembly, Avdullah Hoti, announced that the heads of all parties present at the meeting agreed that before dissolving the current composition of the assembly, the agreement on the Instrument of Pre-accession Assistance, IPA, that administers more than 100 million euros to different infrastructure and other projects should be ratified.

The decision to hold the no-confidence vote comes after outgoing prime minister Ramush Haradinaj resigned on July 19, following his summons to the Specialist Prosecutors’ Office in The Hague for questioning.