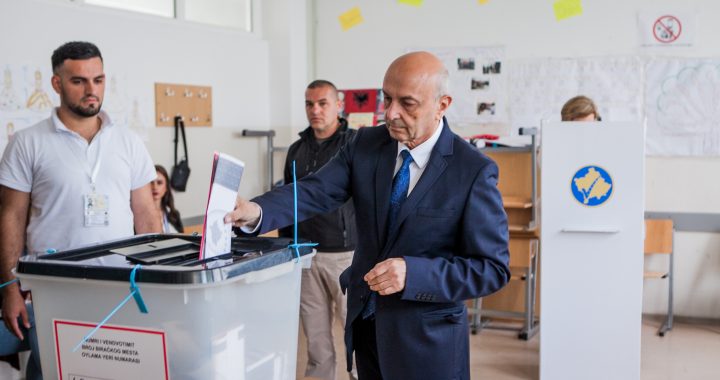 With new parliamentary elections looking set to take place in the coming weeks, LDK has re-elected Isa Mustafa to the throne of the party for the third time.

Isa Mustafa will continue to be the leader of LDK after no candidate with enough support has emerged to stand against him. BIRN understands that only Fatmir Sejdiu attempted to stand against the incumbent but has not managed to trigger a leadership contest, as he failed to secure the 50 percent of votes from 355 party delegates required, only receiving 78 votes.

Confirmation of Mustafa as LDK’s leader came after days of secrecy surrounding who will run for the head of the LDK, with numerous names such as Vjosa Osmani, Lutfi Haziri, Agim Veliu and Gazmend Muhaxheri being rumoured to have all wanted to become the leader of the party.

However, on Friday the party chairmanship met, and it seems achieved a consensus that Mustafa, who has led the party since 2010, would continue his reign.

LDK was formed in December 1989 and was the main party that represented Kosovo Albanians during the 1990’s, a decade in which Kosovo Albanians lived under an oppressive regime that stripped them of basic human rights, including access to education.

After the Kosovo war in 1999, a number of political parties were formed, with many emerging from the political wing of the Kosovo Liberation Army, KLA. However, LDK dominated Kosovo’s early post-war political scene, winning both the 2001 parliamentary elections and 2004’s snap elections.

In January 2006 its first and only president Ibrahim Rugova died, leaving the party at a crossroads. Only months later, LDK’s party convention turned violent, resulting with those discontented leaving the party, forming the Democratic League of Dardania, LDD.

In 2007, LDK signed a coalition governing agreement with its biggest rival, the Democratic Party of Kosovo, PDK.

However, it was a coalition which sparked discontent within the party and was seen as hypocritical by many outside of the party. PDK was often accused of being behind tens of political assassinations after the war and LDK’s leading figures have continually blamed senior figures in PDK for the killings, especially in pre-election rhetoric.

LDK’s coalition with PDK triggered changes within the leadership in December 2010 when LDK elected Isa Mustafa as its leader, after he beat Fatmir Sejdiu with a rhetoric concentrated  against PDK.

From 2011 to 2014, LDK remained in opposition and increased its anti-PDK tone. However, after June 2014’s snap elections, LDK came second with 25 percent of the overall votes while PDK won 30 per cent. In a U-turn move, LDK eventually entered into another coalition with PDK after a lengthy deadlock, with Isa Mustafa becoming Kosovo’s Prime Minister.

The coalition with PDK was highly criticized and resulted in a shrinking of the party’s presence in the Kosovo Assembly in 2017 June’s elections, when LDK for the first time in its history came in third place, behind the PAN coalition made up of PDK, AAK and Nisma, and Vetevendosje.

LDK traditionally has been identified as center-right party with conservative values and nationalism. Since 2012, LDK is a member of European People’s Party, EPP, a center right coalition comprised of political parties across Europe.