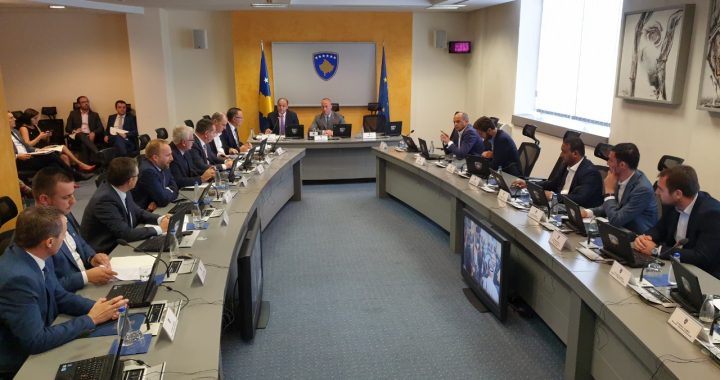 One week after his resignation, former Prime Minister Ramush Haradinaj has requested legal interpretation from the Constitutional Court, asking whether he and his government are still able to make decisions for the country, amid numerous calls for early elections.

On Friday, former prime minister Ramush Haradinaj held a meeting with his cabinet of ministers to discuss what matters his government may still take for the country, despite no longer being in power.

During the meeting, the former prime minister decided to send the matter to the Constitutional Court of the Republic of Kosovo for legal interpretation.

The resignation of Ramush Haradinaj last Friday came after his summons to the Specialist Prosecutors’ Office in The Hague for questioning. The resignation has caused confusion as to the role of the executive body of government, which presently has no successor.

Deputy Prime Minister Enver Hoxhaj said to the former prime minister at the meeting that the government should still be able to make some decisions on behalf of Kosovo citizens.

“This meeting, following this new legal and political situation, is a bit special. I know that you have the points of today’s meeting, but I think there are still topics that we have legal competences over,” said Hoxhaj. “I think we need legal interpretation… the topics that have urgent interest can be dealt with, but the others, I don’t think that we can continue with.”

Members of political opposition party Vetevendosje warned Haradinaj that any decision he makes, as he is no longer in power, will be challenged in court as unconstitutional.

“The government has fallen, so they have no right to call a meeting and take decisions. We will contest each and every decision they make at the Constitutional Court,” said Albulena Haxhiu, a Vetevendosje MP.

Haradinaj said during the meeting that he would submit a question to the Constitutional Court for interpretation, asking whether his government has the competence to take decisions.

“It is a difficult process to see which topics are important and urgent,” Haradinaj said. “Considering this, I think that as the head of the government, I should submit a question to the Constitutional Court.”

Upon his return from The Hague on Thursday, Haradinaj said that despite his resignation, he cannot abandon his prime ministerial role.

Article 95 of Kosovo Constitution reads “If the Prime Minister resigns or for any other reason the post becomes vacant, the Government ceases and the President of the Republic of Kosovo appoints a new candidate in consultation with the majority party or coalition that has won the majority in the Assembly to establish the Government.”

Kosovo President Hashim Thaci is able to choose a candidate for prime minister from the political majority, the PAN coalition, to lead for the last two years of its mandate.

The candidate for prime minister that is chosen then has fifteen days following his appointment to win a majority in the Kosovo Assembly and take power.

The Constitution imposes no time limitation on the president during the process of appointing a candidate. Furthermore, if his first candidate fails, the president has the chance to appoint another candidate within ten days before mandatory elections are called.

Thaci announced that next week he will call a “consultative” meeting with the leaders of all the political parties with seats in the Assembly, to discuss the steps to be taken following the dissolution of Haradinaj’s government.

“The President of Kosovo ensures all citizens that every action taken will be in accordance with Kosovo Constitution and, starting from next week, consultation will begin with political parties/coalitions for the next steps to overcome the situation after the resignation of the prime minister,” reads the statement of the Office of the President.

This is the first time since Kosovo’s independence that a prime minister has resigned. However, the government has dissolved before on three occasions. In November 2010, June 2014 and June 2017, new elections were held following a vote of no confidence submitted to the Kosovo Assembly.

As a result, not a single government has completed its four year mandate in Kosovo.

All political parties have expressed willingness for snap elections to get underway following Haradinaj’s resignation, including members of the parliamentary majority.

NISMA leader Fatmir Limaj was among those demanding early elections on Friday, with both Vetevendosje and LDK saying there is “no other option.”

According to the Constitution, 80 out of 120 votes in the Assembly are required for a vote of no confidence to succeed, dissolving parliament and beginning the process of electing a new government.

In the situation that a vote of no confidence is held and is successful, elections will be held no later than 45 days after the Assembly is dissolved.