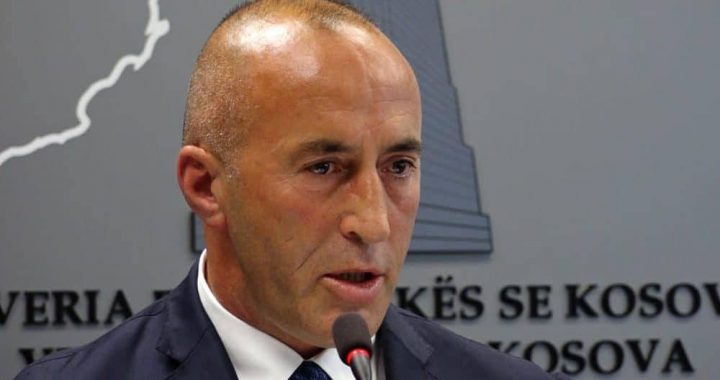 Outgoing Prime Minister Ramush Haradinaj said he chose not to give any answers to questions when he was interviewed as a suspect by prosecutors in The Hague who are probing wartime and post-war crimes in Kosovo.

Ramush Haradinaj, a former Kosovo Liberation Army commander who announced his resignation as prime minister after being summoned for questioning as a suspect, was interviewed in The Hague on Wednesday by the Kosovo Specialist Prosecutor’s Office.

Haradinaj said that he declined to answer the questions posed by the Specialist Prosecutor’s Office, which is investigating crimes committed during and just after the Kosovo war, from 1998 to 2000.

“Today I presented myself in the role of a suspect, to carry out a legal obligation. I accepted legal advice not to answer any questions,” Haradinaj said after the interview.

“I will respect every legal obligation that comes up at any time. For us, it is important to show the example of respecting the rule of law,” he added.

Haradinaj, who resigned as prime minister on Friday, is one of several dozen former members of the wartime guerrilla force who have been called for questioning in The Hague. Kosovo’s former parliamentary speaker Jakup Krasniqi was the latest to say he has been summoned.

The Hague-based Kosovo Specialist Chambers are expected to try former Kosovo Liberation Army fighters indicted by the Specialist Prosecutor’s Office for crimes including killings, abductions, illegal detentions and sexual violence. No indictments have been made public yet, however.

Haradinaj has already been acquitted of wartime crimes twice by the International Criminal Tribunal for the Former Yugoslavia in The Hague.

He said he has send his letter of resignation to the leaders of political parties in Kosovo, including President Hashim Thaci, and that general elections should be held soon.

“Until the election of the new government, I will continue to perform constitutional tasks as the prime minister of an outgoing government,” he said, media reported.

He told Reuters news agency before leaving for The Hague that he will compete in the elections if there is no indictment issued against him.

Opposition party Vetevendosje (Self-Determination) warned meanwhile that if President Thaci delays setting an election date, it will call an extraordinary parliamentary session to dissolve the legislature.

“This is the only way to stop the president from manipulation to push the election date [back],” Glauk Konjufca from Vetevendosje told a press conference on Tuesday.

Kosovo is expected to have snap elections in September, as none of the current governing political parties has the numbers to form a government.