‘Can you eat asphalt, pal?’

In the Dukagjini region – Peja, Decan and Gjakova – over 70 villages lack drinking water, and many suffer from inadequate sewage systems. Meanwhile, the Kosovo Government is preoccupied with the construction of a one billion euro motorway across Dukagjini soil.

If the new highway named ‘Dukagjini’ is constructed, the lanes of the motorway would be only 10 kilometers away from the residents of the village of Maznik. However, this village, quite far from the city of Decan, has more pressing problems: no drinking water and no functioning sewage system.

Each of the houses has an outdoor well where residents are able to access drinkable water. In the village, there are septic tanks used to treat sewage, but in some cases, due to the lack of safe procedures for treating and releasing household waste, this wastewater spreads through the fields surrounding the homes of the village residents.

“From the wastewater, we are in danger of disease,” says Afrim Tahiraj from Maznik, who heard about the new highway, but expresses little enthusiasm for its construction.

“Can you eat the asphalt, pal? Can you see, there is no water supply or sewers,” he complains. 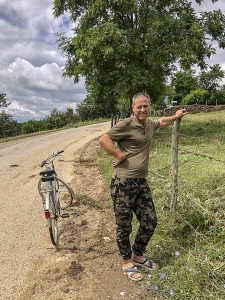 The new Dukagjini highway, according to the draft plan, will be 91 kilometers long, and will pass through villages of Istog, Peja, Decan and end up in Prizren. Between these three municipalities, BIRN discovered, there are 73 villages without a stable domestic water supply to homes of the residents.

After years of unfulfilled promises from Kosovo politicians to fix these issues, residents of the villages are angry that their public officials are prioritising multimillion euro construction projects, when it would cost a fraction of the price to provide them with the basic everyday necessities they are lacking.

In the aftermath of Kosovo’s independence, the number one priority for the government has been direct investment in asphalt. In 2019 the second large scale highway was completed, ‘Arben Xhaferi,’ connecting Kosovo and North Macedonia at the cost of 800 million euros. The 2013 ‘Ibrahim Rugova’ motorway, that connects the country with Albania, cost 900 million euros.

Should I stay or should I go?

In Maznik, Tahiraj is a farmer. Among his four children, two have left the country to Germany. He says that all youngsters are abandoning the village. His two children abroad are among the 170,000 Kosovo citizens who have left the country in the last five years, which amounts to around ten per cent of the overall population of the country.

The village of Maznik used to be famous for the cultivation of peppers, says Tahiraj, with tens of hectares of farmland. Today it has only one usable hectare left. Tahiraj explains that he was never supported by the municipality of Decan with subsidies to help with production. He is not the only one, as he cannot recall a single cent in the form of subsidies that have been allocated to his neighbors, either.

According to the Ministry of Agriculture, Forestry and Rural Development, a budget of 24 million euros was allocated in 2019 specifically to provide rural farmland across Kosovo with financial assistance to sustain the country’s agricultural industry. Meanwhile, in 2019 alone, Kosovo taxpayers contributed more than 78 million euros from their taxes to pay for motorway construction.

For many, however, this lack of assistance has left residents searching for greener pastures.

“I’m waiting to get a visa to go to Germany,” says Avni, a youngster who accompanied BIRN’s team in Maznik. “In our village, there are no leisure activities that young people can do besides go to school.”

The medical clinic in the village, constructed 12 years ago, is dysfunctional, the surrounding grass and trees are overgrown and obscure the building. Tahiraj explains that the healthcare center, even after it was built, never opened. 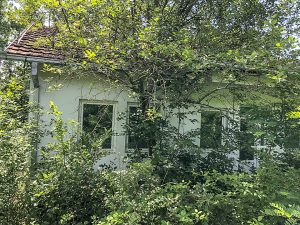 The healthcare center in Maznik, built 12 years ago has never been operational. Photo: Agon Sinanaj.

There are tens of other villages suffering from the same problem. However, officials from the Municipality of Decan told a completely different story. According to them, besides Maznik, there are only two other villages lacking adequate water supply.

“93 per cent of the territory in the Municipality of Decan has its water supply, excluding Maznik, Lower Ratish and Upper Ratish. In these three villages, the tendering process is almost done,” the press office of the municipality said in its reply to BIRN.

However, the reality on the ground in Decan seems very different. Besides Maznik, Lower and Upper Ratish, there are tens of others who have the same issue, according to members of civil society in the western town of Kosovo.

Adem Lushaj, executive director at Association of Independent Intellectuals, told BIRN that there are 14 villages in Decan that have problems with their water supply.

“We identified that besides Maznik, Lower Ratish and Upper Ratish, the villages of Prejlep, Prellokuk, Irzniq, Gllogjan, Shaptej, Gramaqel, Dubrave, Rastavice, Baballoq and Jasic i Ri all have daily challenges with water supply,” says Lushaj, explaining that this is a result of poor installment of the existing water supply system.

As for sewage facilities, Lushaj insists that only some neighborhoods have the systems partly installed, and for the majority of the citizens in the town, it is completely absent.

Wastewater spreads across the village of Maznik. Photo: Agon Sinanaj.

Taking into account the difficulties in these villages, and their reliance on investments in agriculture and mountain tourism, the construction of such a motorway in this area is not a priority, believes Lushaj.

“Far more economic and beneficial would be the construction of a road that connects Decan with its beautiful natural surroundings, the ski center in the mountains of Beleg or other parts of Decan,” he insists.

“It’s better to invest in basic necessities of the villages than in a highway that can hardly bring any economic development to our municipality,” says Lushaj.

Villages in Peja and Gjakova forgotten

In two other municipalities, Peja and Gjakova, the situation is no better. There are 59 villages without proper water supply across the two municipalities.

In the village of Kotradiq, promises that drinkable water will be available to them have been heard by residents for over a decade.

Avdyl Idrizaj complains that politicians make promises during electoral campaigns, but have never succeeded in fulfilling the basic needs of the residents. “When elections come, we always see some excavators [beginning the work], but then nothing happens,” says Idrizaj, whose family relies on agriculture for survival.

Having no water, he decided to open a well to sustain the hectares of land he uses to cultivate vegetables. Similar to Tahiraj from Maznik, Idrizaj complains that he has never been subsidized by the municipality for his business, despite making requests. 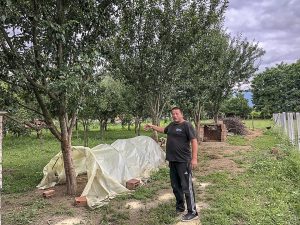 Avdyl Idrizaj complains about the lack of governmental support for the agricultural industry in his village. Photo: Agon Sinanaj.

“I have three sons and all of them want to leave. My son has finished university and now works as a waiter,” says Idrizaj.

When asked about the plan to build a highway in the Dukagjini region, Idrizaj gets angry.

“Man, we have no water supply for our farmland and you are talking about the highway?”

The mayor of Peja, Gazmend Muhaxheri, promised residents of the municipality during his electoral campaign in 2017 that he would honor their requests, and construction of proper water supply systems would begin as soon as he took office.

BIRN contacted him to ask why the village of Kontradiq has no water supply. “In Kontradiq, the installment of the water supply began seven years ago, and we are still working there,” he said, adding that protests from residents living in areas where the pipes are to be constructed are slowing down the process. 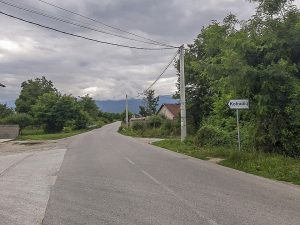 Muhaxheri confirmed that in Peja, there are 16 villages without water, and 12 others in the Rugova valley.

Despite the absence of basic necessities for the residents of these villages, politicians in the capital have set different priorities for the Dukagjini region.

Minister of Infrastructure Pal Lekaj, in a response to BIRN, said that the Dukagjini highway will soon be underway. The fact that the survival of the government is in question after the resignation of Prime Minister Ramush Haradinaj last week, the fate of the project, which is estimated to cost one billion euros, is not in question, he said.

According to Lekaj, one million euros has already been allocated for the planning phase, a process that will pave the way to the tendering process and choosing the company that will oversee the construction, expected to occur in August.

“To start with, another one million euros has been foreseen for the construction of the Dukagjini highway,” said Lekaj. “For the first time, the public hearings have been completed, so it seems that this highway has been given the green light from citizens of these municipalities through which this highway will pass.”

Municipalities in Kosovo have the obligation to conduct public consultations prior to the beginning of any construction project that could have significant impact on the surrounding residents and the environment.

During the course of BIRN’s investigation, no residents interviewed came out in direct support for the highway’s construction. 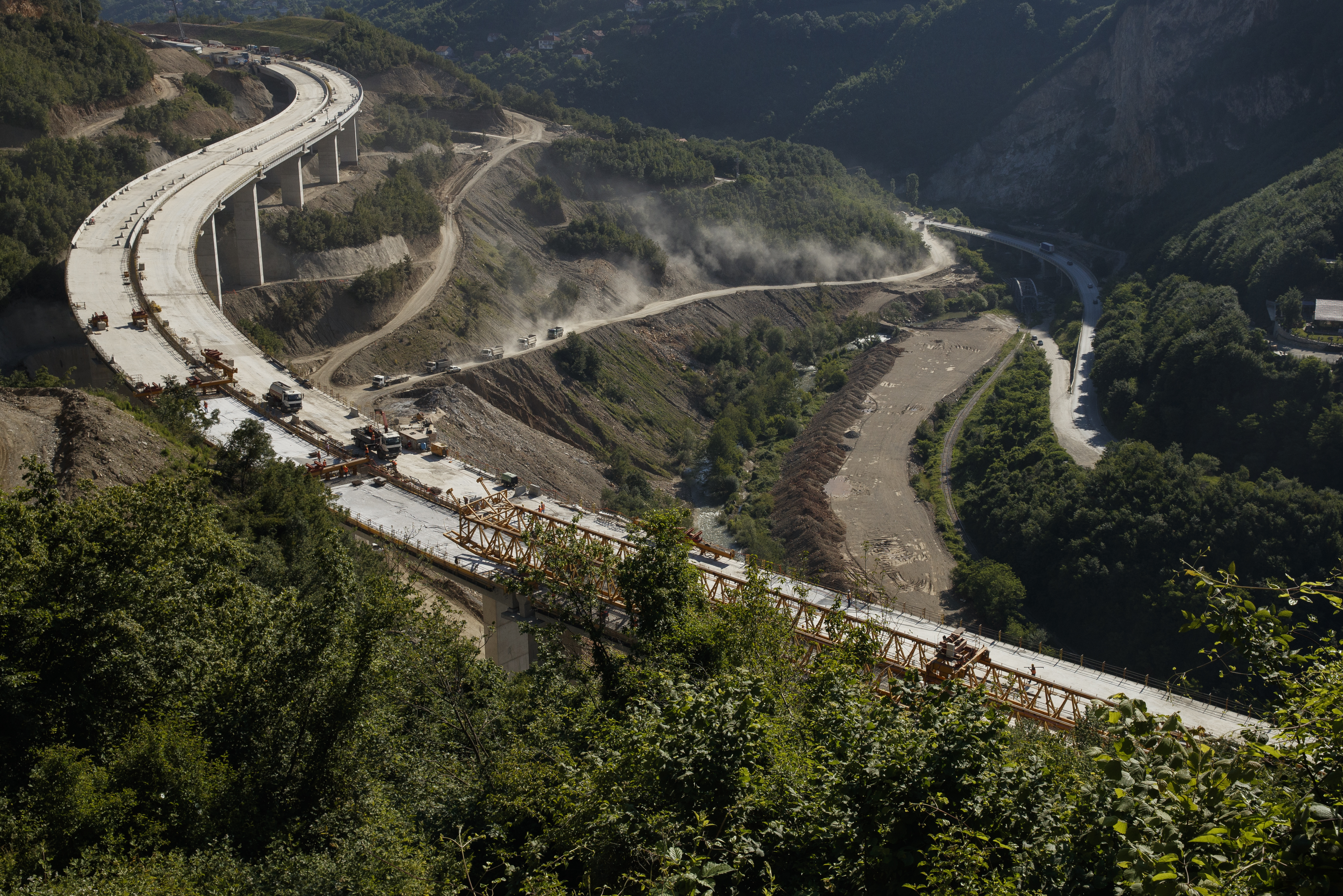 A view of the motorway ‘Arben Xhaferi’ near the town of Kacanik, Kosovo, 01 June 2018. The Motorway ‘Arben Xhaferi’ links the Kosovo’s capital Pristina with the border of the The Former Yugoslav Republic of Macedonia at Han i Elezit, which is about 20 km from capital Skopje. The construction of the motorway is 60 km long, has a budget of 600 million euro, started in July 2014 and it is scheduled to be finished in late 2018. EPA-EFE/VALDRIN XHEMAJ.

The Dukagjini highway has found objection not only among the political opposition in the Kosovo Assembly, but also from the ruling coalition partners in government. PDK officials and NISMA MPs have both spoken out against the project, citing the lack of economic benefits and other priorities that the government should concern itself with as reasons for their dissent.

The initial construction project for the Dukagjini highway will cost around 560 million euros – not including the cost of expropriating the land and relocating many homeowners obstructing the proposed route for the highway.

According to Lekaj, 40 per cent of the proposed 91 kilometer highway is currently resting on land that is owned privately, resulting in astronomical additional cost for its construction, reaching around one billion euros.

This means that Kosovo taxpayers would pay 11 million euros per kilometer. With the cost of construction for one kilometer of the highway, the concerns of residents of Maznik and Kontradiq in the west Kosovo would come to an end.