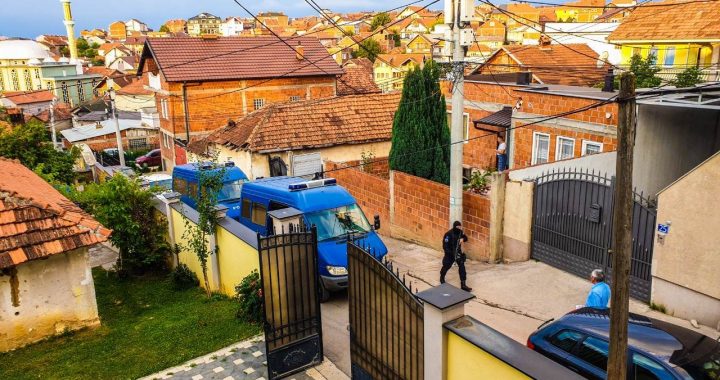 police officer stands outside a house in Pristina during a raid to confiscate illegal arms on July 24. Photo: BIRN

Kosovo Police arrested 18 people after a deadline for gun owners to register any arms in their possession expired in June, confiscating illegal arms and ammunition across 27 locations on Wednesday.

Kosovo Police launched a large-scale operation in the early hours of Wednesday morning to confiscate illegal arms, targeting numerous locations across the country and arresting a total of 18 people, the police confirmed.

The round-up comes after Interior Minister Ekrem Mustafa in November last year gave citizens a deadline of June 17, 2019, to register any weapons in their possession. After this date, anyone caught in possession illegal weapons risked a fine of up to 7,500 euro or a five-year prison sentence under an amendment to Article 374 of the criminal code for unauthorized possession of arms.

After the dragnet action ended, police said Operation Target was spread over 27 different locations and resulted in 18 people being held.

Police said they believed the guns came illegally from Turkey, and were modified from air guns once they arrived in Kosovo.

The amount of unauthorized weapons in private hands is a problem throughout the Western Balkans, and is partly a legacy of the wars that devastated the former Yugoslavia in the 1990s.

Montenegro, Serbia, Bosnia and Herzegovina, North Macedonia and Kosovo are among the top 25 countries in the world in terms of the percentage of firearms owned per civilian, according to a global Small Arms Survey conducted last year, Balkan Insight reported.

NOTE: This article was amended on July 24, 2019, to include the outcome of the raid after a police press conference that same day.