An old melody that has echoed through the decades

The Shala family from Gjakova continue to perform traditional Albanian folk songs, as they have since the early 1980s, through Kosovo’s good and bad days.

Losing a family member often leaves an indelible wound, one that touches upon memories of old times and impacts on the life and works on the living. Such was the case for Kosovar singer Nezafete Shala, the lead vocalist in all of the musical incarnations of the Shala family from Gjakova.

“After my father died, I had no desire to continue singing. My mother was the one who stubbornly insisted for me to sing, although I had mixed emotions,” Nezafete says, referencing her father, Faik Shala’s death in 2007. “I always sing in memory of my father.”

For Nezafete and the rest of Shala family, losing Faik meant more than just losing someone close to their heart. The family lost the person who had started their musical endeavours, the violinist who pushed the rest of the family to start performing in the early ’80s. 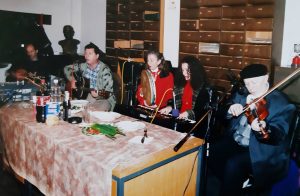 “At that time, the late Faik professionally cultivated the art of photography, and yet it was music that was the epitome of the Shala family,” recalls Agim Malazogu, who has also performed with the family. “He had a passion for music and, observing the talent and discipline his children had in music, he started to practice with them, learning melodies and songs, as well as playing instruments.”

In 1983, with Nezafete as a vocalist, her sister Nezahate on piano, and her brothers Arsim and Njazi, on mandolin and vocals and guitar respectively, the Shala Family appeared in public for the very first time at the “Metaliku” factory in Gjakova, to celebrate New Year’s Eve.

In the same year, singing “Lule për të dashurën” (“Flowers for my loved one”), Nezafete won first prize at Akordet e Kosoves (‘Chords of Kosovo’) – a festival that kept alive traditional Albanian music within Yugoslavia. History repeated itself in 1985 when she won the same festival with the song “Një fjalë goje, një martesë” (“A word of mouth, a wedding”).

The Shala Family was developing a strong reputation for its performances of traditional Albanian songs, until the political and social reality began to change. It would only become worse in the years to come, and the perfect harmony of the group during the ’80s would be all but destroyed by a turbulent decade awaiting Kosovo Albanians.

The repressions of the Serbian state over Kosovo Albanians throughout the ’90s extended deep into the arts, especially music, with those who sang in Albanian often targeted. “If we sang melodies with patriotic motifs, there was a huge risk of being caught by the Serbian regime of the time,” Njazi Shala says. “It was not at all easy to save ourselves from the trouble.”

Esat Bicurri, one of the country’s most legendary singers was killed during the war in Kosovo. His remains were only found in 2004.

As with most Albanians in public institutions, Faik was fired from the Hajdar Dushi Artistic Society, while his children were removed from the professional choirs they attended. Left out of cultural institutions, the Shala Family found itself in poverty and insecurity, and, as with many Kosovo Albanians in the ’90s, survival became the main goal.

“This was the reason that Shala Family had started to perform in different locations, restaurants mainly, a routine that was littered with obstacles,” remembers Njazi Shala. Restaurants like Bajram Curri, Te Syla, and Rozafa in Prishtina gave the group a venue to perform and delight fans of Albanian folk music, mainly with songs from Central and Northern Albania.

But these venues were not the only places where the family found opportunities to survive the dire economic situation. Agim Malazogu recalls an invitation they received from people from the Preshevo Valley to perform at a family party.

“We left for Preshevo in a very old car, all five of us. The roads at that time were difficult to cross, we had to cross mountains in Gjilan and Preshevo,” Malazogu remembers. “It was cold, the roads were muddy and unpaved. It was dangerous, but we arrived there and the night was successful. We received many thanks from the family.”

These years have undoubtedly remained in the memory of the Shala Family, with innumerable experiences before the end of the war and the beginning of a new chapter. Although much has changed in these last two decades, both socially and politically, the authentic music that the group brings has changed little in both the repertoire and style, with the group performing the songs in a traditional manner, without bastardization.

“The music we play today is not much different from the one we performed years ago,” Malazogu says. “We have tried to preserve our originality. We have of course included new songs that are currently popular and loved by the general public. The instruments remain all the same, the classic ones.”

The lyrical content of the songs performed varies, but mostly tackle nature and love, as well as migration, poverty and the day to day reality of Kosovo. “Vitet ikin tutje” (“The years pass by”), “S’mendoja” (“I wasn’t thinking”), “Në Shkodër të vish” (“To come to Shkodra”) and “Lulet e majit” (“May flowers”) are some of the regular songs in the current repertoire of the group.

A woman of very few words, most of those musical notes, Nezafete Shala holds the tambourine in her hands, and with her soft voice, sings while giving the impression of a moving painting. According to Malazogu, all credit for keeping authentic music alive in Kosovo today should be given to her.

“Today, the main credit goes to Nezafete Shala and her stunning vocals, who has found an audience featuring people of all ages,” he says.