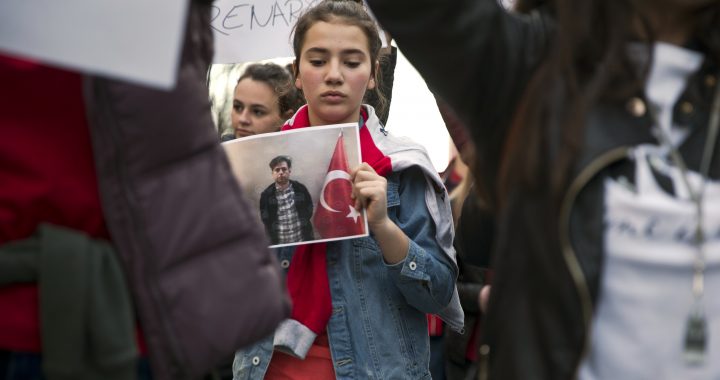 The Police Inspectorate of Kosovo filed criminal charges against 22 members of the Kosovo Police to the Special Prosecution on Thursday, implicating them in the deportation of six Turkish nationals in March 2018.

16 months after the controversial deportation of six Turkish nationals from Kosovo to Turkey in March 2019, 22 members of the Kosovo Police have allegedly been named in a report connecting them to the case published by the Police Inspectorate of Kosovo, IPK.

In a response for BIRN, the Kosovo Special Prosecution Office announced that they received the report from IPK on Thursday, but failed to provide any information as to the nature of the allegations made against the members of Kosovo Police.

IPK is an inspection body independent of the Kosovo Police, who are responsible for investigating allegations of misconduct by police employees. The body is mandated to issue reports and recommendations and, where appropriate, forward cases to the prosecution.

Following review of the criminal report issued by IPK, the Special Prosecution will decide whether or not to initiate their own investigations into the charges.

The ‘Gulenists’ case involved five employees of the Mehmet Akif colleges in Kosovo and a sixth Turkish national, who were arrested and deported to Turkey on March 29, 2018.

According to Turkish state news agency Anadolu, the four Mehmet Akif elementary and high schools in Kosovo are part of what they call the “Gulenist terrorist organization, FETO,” led by Turkish imam Fethullah Gulen, currently living in exile in the US. The Turkish state considers Gulen’s movement to be a terrorist organization – a claim that Fethullah denies – and has requested his extradition to Turkey to try him for the failed coup in 2016.

According to BIRN’s sources, among those charged is Rrahman Sylejmani, Director of the Border Department of the Kosovo Police. Prior to any investigations being launched, the Special Prosecution Office was already gathering information and evidence against Shaban Guda, a deputy lieutenant in the Kosovo Police.

Police ‘not to blame,’ says Haradinaj

In November 2018, outgoing Kosovo Prime Minister Ramush Haradinaj called the action that led to the deportation of six residence permit-holding Turkish nationals “hasty and surprising,” but also said that Kosovo Police are not to blame for the incident.

According to him, he could have dismissed former police chief Shpend Maxhuni, but did not see him as responsible.

The day after the deportation occurred, Haradinaj signed a decision for the immediate dismissal of Driton Gashi, the head of the Kosovo Intelligence Agency, AKI, and the Minister for Internal Affairs Flamur Sefaj.

On March 30, 2018, Haradinaj issued a statement declaring that he had not been informed of the action, which was carried out by the Kosovo Police, acting on information from the Intelligence Agency.

“The operation of the termination of residence permits, of detainment, and the urgent deportation of six Turkish citizens from the territory of the Republic of Kosovo has happened without informing the head of the government and without his permission,” said Haradinaj.

Nazmi Ulus, director of the Mehmet Akif college in Lipjan, said that all of the arrested had residence permits until 2022.

The Ministry of Internal Affairs of Kosovo also issued a press release at the end of March 2018 saying that the five Turkish employees of Mehmet Akif schools in Kosovo who were arrested on March 29 were stripped of their residence permits due to reasons of “national security.”

According to the Law on Foreigners, no reasons are required to be given for residence permit revocation where issues of national security are involved.

An Ombudsperson report on the forceful removal of the six Turkish nationals was released on April 27, 2018. Hilmi Jashari, the Kosovo Ombudsperson, explained in an interview following its publication that “from the first step to the last moment” the entire process was in violation of legal obligations proscribed in the Kosovo Constitution and the European Convention of Human Rights.

The report finds that multiple Kosovo laws were violated during the arrest and forceful removal, as were obligations set out by the European Court of Human Rights, which forbids the extradition of a foreigner to a territory of a state where they might be in danger of inhumane treatment.

Haradinaj himself was invited to be interviewed by the Parliamentary Commission for Investigating the Deportation of Six Turkish Citizens, which was set up to investigate the incident in June 2018.

According to him, a foreign diplomat who he was having a meeting with during the events related to the deportations, informed him that the Turkish citizens were being removed from the country.

Allegations made against the President

At a press conference held in May 2019, two members of the Kosovo parliamentary commission investigating the deportation of six Turkish citizens last year, MPs Xhelal Svecla and Driton Selmani, confirmed that its report had been passed on to the Kosovo Assembly.

In April, Thaci was interviewed at the Assembly of Kosovo, but the questioning brought no clear results. Thaci contested the report and declined to answer the questions posed by members of the commission.

Correction: This article was edited on 16/8/2019 to correct a mis-translation. IPK submitted a report to the prosecution, and not criminal charges.