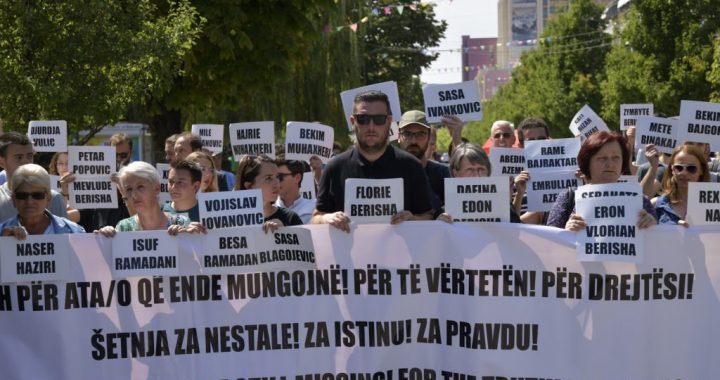 Family members and activists express frustration at the continued uncertainty surrounding the fates of over 1,600 people still missing from the Kosovo war.

To mark the International Day of the Disappeared, hundreds of protesters in Prishtina marched from the Newborn monument to the main government building on Friday, under the slogan “How many more years should we wait?”

More than 1,600 people are still missing from the 1998-1999 war in Kosovo, including ethnic Albanians, Serbs, Roma, Ashkali and Egyptians.

Participants in the demonstration carried placards containing the names of people who are still missing, while activists also covered the Newborn monument in a black cloth.

Bjeshka Guri from the humanitarian NGO Youth Initiative for Human Rights, YIHR, said that the action was a demonstration that, without knowing the fate of the 1,600 people still missing, the concept of being ‘newborn’ as a society was meaningless.

“It is the responsibility of each of us to be more vocal about the missing persons and their families,” added Guri, asking Kosovo’s institutions to put the issue of the missing as a priority in the dialogue with Serbia. “If 20 years were not enough to know about the fate of the missing, how many more years should we wait?”

Another march held in Zahir Pajaziti square in Prishtina was organized by a group of associations related to missing persons and their family members. There, Bajram Cerkini, the head of the Missing Persons Resource Center criticized both local and international actors involved in the process of shedding light on the fate of missing persons.

“On this day, the families have a wound that does not heal. Not only locals but even internationals are not helping, and we all know that the address is in Serbia,” Cerkini said, alluding to the need for more pressure towards Belgrade.

Although Kosovo and Serbia have been engaged in a dialogue since 2011, and reached more than 30 agreements on different fields, from free movement of people to diploma recognitions and other technical agreements, the issue of missing persons and war reparations has never been on the table at the Brussels-based talks.

Kosovo President  Hashim Thaci who led the dialogue with Serbia as former Prime Minister and who signed the agreement with Serbia in 2013, wrote on his Facebook Page that peace cannot be achieved without shedding light on the fate of the missing persons.

“There cannot be peace without shedding light on the truth about their fate and holding responsible the perpetrators of these crimes,” Thaci said. “We will not stop until we have shed light on each of those missing in Kosovo.”