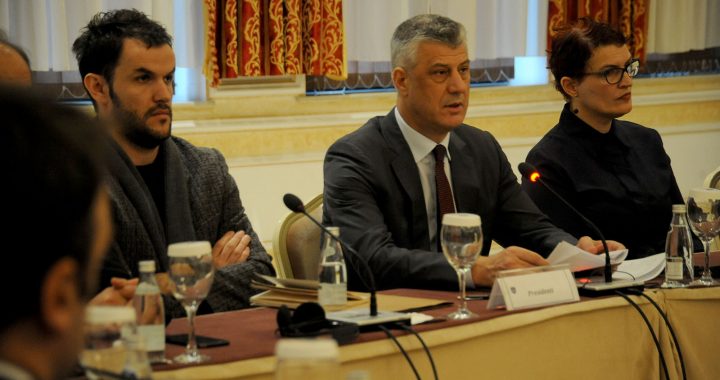 President Hashim Thaci’s initiative for a Kosovo Truth and Reconciliation Commission continues, with a team established to prepare its legal and technical infrastructure.

Kosovo President Hashim Thaci announced on Wednesday that he has taken the first  concrete step for the Truth and Reconciliation Commission to address Kosovo’s wartime past. He initiated a preparatory team that will consist of nine members — two from the Office of the President, one from the Government, one from the Assembly, and five from civil society. The names of the representatives are forthcoming.

The team will have one year to plan the commission’s technicalities.

In February of this year,  President Thaci revealed his intentions to establish the commission. This initiative, according to Thaci, aims to conclude the chapter of war in order to open up the one of peace for the future generations.

“Almost two decades have passed since the end of war. Nowadays when you travel through Kosovo you barely see any signs of conflict, but the wounds in the hearts of the victims still remain,” said President Thaci on Wednesday.

“These often become an obstacle for the future of our country. That is why I have initiated the creation of the Commission for Truth and Reconciliation, in order to conclude the chapter of war and start the one of peace for the future generations.”

The goal of this commission, according to the Kosovo President, is to build a unified historical narrative for Kosovo.

“What we hope to achieve with this commission is to build a unified narrative for our past. So we can come to terms with our past, and not fight with it. That is how we are going to reconcile towards building our future,” said President Thaci.

He also said that in the following months and years, support and involvement from embassies will be necessary.

British Ambassador to Kosovo, Ruairi O’Connell, who attended the conference, supported the initiative by saying that he will help with any means necessary, but that it is Kosovars who should be leading the process.

Bajram Qerkini, representative of the families of missing persons, said that this process was implemented late.

“This is for knowing the truth, but we are just beginning to deal with this great issue. We took our time, and in fact we were late. Our children have to know the truth, and they also have to reconcile with the truth,” said Qerkini.