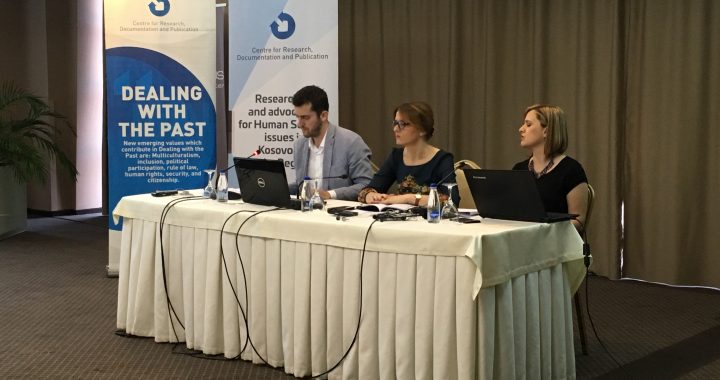 Diverging opinions about the past, low interaction and socio-economic stagnation are key factors hindering the reconciliation process between Serbs and Albanians, new CRDP report finds.

Great discrepancy exists across different age and ethnic groups in Kosovo over the issue of reconciliation, finds a new report by Center for Research, Documentation and Publication, CRDP.

As the first attempt to map attitudes of Kosovar people about reconciliation, the report, titled “Deconstructing Reconciliation in Kosovo,” focuses on personal attitudes rather than the institutional dimension of the ongoing reconciliation process within Kosovo society.

According to the report, the concept of reconciliation has strong individual and ethnic connotations exacerbating tensions across different generations of Kosovo Albanians and Serbs. Reconciliation is, hence, perceived as something more feasible at the individual level than at the collective level for all ethnic groups.

“Our aim was to fill a critical data gap on how citizens of Kosovo understand reconciliation in order to assess the current situation regarding transitional justice,” said CRDP director Besa Kabashi Ramaj at the report’s launch on Thursday.

Kabashi Ramaj said that there is no one definition of reconciliation and little has been done so far to reach a common understanding on how to deal with the past in Kosovo and other Western Balkan countries.

Kosovo citizens see the process of reconciliation as “a continuation of economic development and political stability rather than as a top down process supported by the international community and dishonestly so far promoted by politicians,” the report states.

The findings also highlight low inter-ethnic cooperation, lack of confidence in international and national institutions, and the implementation gap of policies regarding socio-economic improvements as the main challenges for the reconciliation process.

Interestingly, the report reveals that families of the victims and missing persons or war survivors express more sympathy for the victims of other ethnicities and are more open about the past than people from areas less affected by the conflict in Kosovo. The report also points to relatively higher levels of skepticism for a common future among younger respondents, and to the related recognition of the importance of the role of education in the reconciliation process.

The research was conducted using both qualitative and quantitative methods: 1,040 people from all over Kosovo were surveyed and 71 people were interviewed in focus groups, all participants of ages 18 and over.

At the report’s launch, researchers Yllka Buzhala and Adnan Hoxha mentioned the two main limitations of the research: the lack of updated and comprehensive census data, and the sensitive and emotional aspect of the subject.

Kabashi Ramaj also openly remarked that, although Kosovo Serb researchers were involved in all phases of the project, the report is currently available only in Albanian and English (and not in Serbian) due to funding constraints.

“Now that we have this new database, our next step will be to consult with partners and to develop an informed roadmap with a focus on bottom-up approaches to achieve reconciliation as a country,” Kabashi Ramaj said.