The comprehensive guide to traveling between Kosovo and Serbia

Whether you’ve got the Balkan bug or you just want to plan a weekend partying all night on Belgrade’s splavs, one of the city’s unique diversions, especially for those of us living in this city without a river, you might have questions about how to travel from Kosovo to Serbia. Here in the Balkans many of us expats love the region’s idiosyncrasies, but there is just one that is infinitely frustrating and — dare I say — downright detestable.

As an expat who’s been working in the Balkans for more than seven years now, I’ve fielded my share of questions about bus schedules (which are more often than not still not published on the internet), phone plans and, most confounding of all, the logistics of traveling from Kosovo to and through Serbia, which for many still remains an odyssey. I’ve always wanted to find a link to send these curious, mobile folk and as the old adage goes, if you want a thing done well, do it yourself. So here goes.

If you’re from Kosovo, you have no problem getting to Serbia. Most of the countries of Europe may be closed to you if you don’t have a visa, but neighboring Serbia beckons! A 2011 deal on free movement between Belgrade and Prishtina means all you need is your ID card. You will receive a temporary paper visa that you MUST have when you leave Serbia and return to Kosovo. If you’re traveling with Kosovo number plates, you can buy a temporary license plate at the border and your insurance is now recognized by Serbia, which will save you at least one hundred euros.

You can stop reading here if you are from one of the other former Yugoslav countries (you probably have anyway) besides Bosnia, since Kosovo has applied a visa regime due to non-recognition, which likely includes the precise crossing where you can enter and exit Kosovo. If you’re from a European country that issues national identity cards to its citizens, then you can cross at any border between Kosovo and Serbia by using only your ID card!

But if you’re like me and other nationals of countries that don’t make national IDs, a group of people who are used to their passports opening a lot of doors, or, erm, borders for them,* you can only enter Serbia from Kosovo if you originally entered Kosovo from Serbia and don’t have proof that you went elsewhere. You need to have a Serbian entry stamp that was issued less than three months before your attempted (re)entry.

There are several borders you can use – the most direct trip to Belgrade, for instance, is Merdare, near Podujevo. You can also cross north of Leposavic at Jarinje and west of Mitrovica at Brnjak. To the east, you can cross at Konculj (Dheu e Bardhe or Bela Zemlja), which goes towards Bujanovac and at – my personal favorite name – Mucibaba, which goes towards Presevo. There is a tiny border north of Prapashtica called Mutivoda, which goes in the direction of Medvedja. 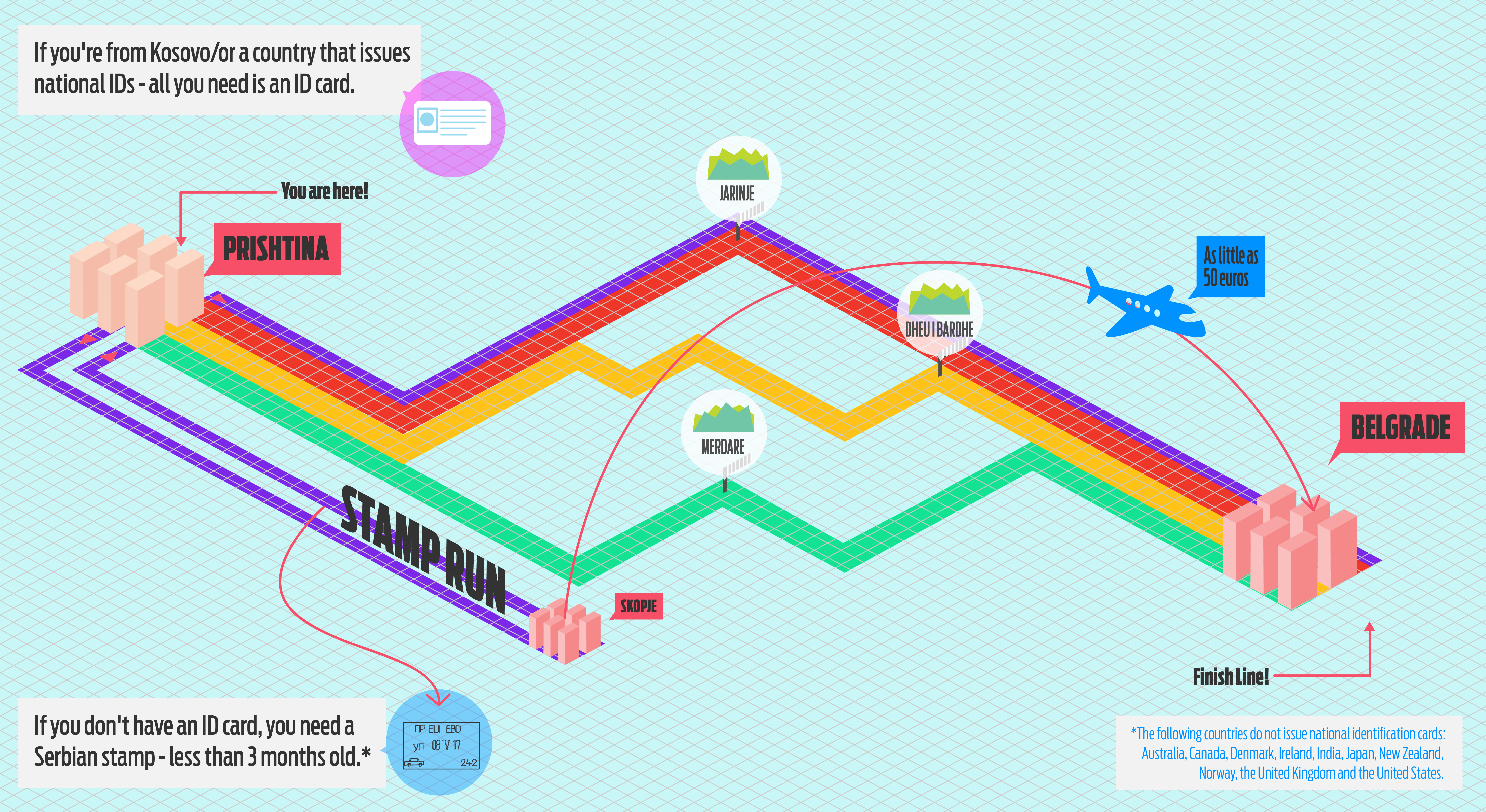 So what can you do to get around this?

Many people unfortunately make the five hour “stamp run” journey in advance of a planned trip to Serbia. It involves driving to Skopje, getting stamped in Serbia at Miratovac, and then returning to Kosovo via Presevo and Mucibaba. You’ll need good humor and a good friend you haven’t seen in ages or a few good podcasts.

Other people go to Skopje and fly to Belgrade via Air Serbia, which can cost as little as 50 euros per flight when purchased in advance.

If you need to travel regularly to Serbia like I do, you might be able to get a second passport and use one just for travel to and from Serbia. The catch here is that you still need to get that entry stamp every three months, and you won’t get one when you enter from Kosovo.

Serbia and Kosovo were able to find a solution for citizens of the countries of this region using national ID cards. It found solutions paving the way for Kosovo to get its own country code and to enable motorists to use stickers to cover up offending bits of their car license plates. (This agreement stalled, no joke, because of the sticker tender.) Surely the prime ministers, or presidents, or really just the technical dialogue teams can find a creative way to get around this problem for expats, tourists, students, and whoever else wants to spend time here. Both countries have spent a lot of time, money and energy trying to show that they are normal now, and this idiosyncrasy is in stark contradiction to that desired image.  For years now, Belgrade has been talking about creating direct flights to and from Prishtina (or resuming them, as it were). In fact, this flight may be the primary way to make Air Serbia and its recently-instituted weekly flights to the United States financially sustainable, a Serbian businessman told me. A win for those living in Kosovo, who’d get access to the greater variety of flights from Belgrade’s Nikola Tesla Airport, and a win for Serbia, who would have more traffic at its airport and more passengers on its aircraft.

One wonders how Belgrade might get around its travel restrictions if and when these flights start landing from Prishtina. With or without the flights though, I hope for the sake of my sanity and the tourism and travel dollars that Kosovo and Serbia are missing out on that this gets resolved sooner rather than later. Until then, we have another case of Balkan politicians cutting off their noses to spite their face, one of the region’s unlovable idiosyncrasies, the infamous Balkan inat.

by Milos Milovanovic
Next: News