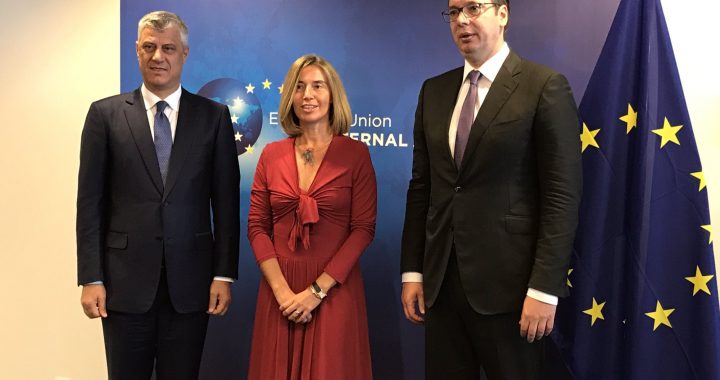 Kosovo and Serbia agree to begin new phase of dialogue

At an informal meeting in Brussels with Serbian President Vucic and EU High Representative Mogherini, Kosovo President Thaci agreed to a new phase of the Brussels-facilitated dialogue.

At the informal meeting in Brussels on Monday morning, Thaci and Vucic agreed to prepare for a new phase of the Brussels-facilitated dialogue.

“They agreed to work on starting a new phase of the dialogue between Belgrade and Pristina for normalisation of relations and reconciliation, and they decided that the respective teams will start working on preparations. They also stressed the importance of the implementation of the agreements reached in the dialogue without delay,” reads an EU statement following the meeting.

President Thaci took to Twitter to express his support for the agreement.

But reconciliation & fully normalized neighborly relations between Kosovo & Serbia is an aim to secure peace for our children. A worthy aim.

In March, the Kosovo parliament voted to suspend the Kosovo-Serbia dialogue until Ramush Haradinaj, who was arrested on a Serbian warrant in France, was released.