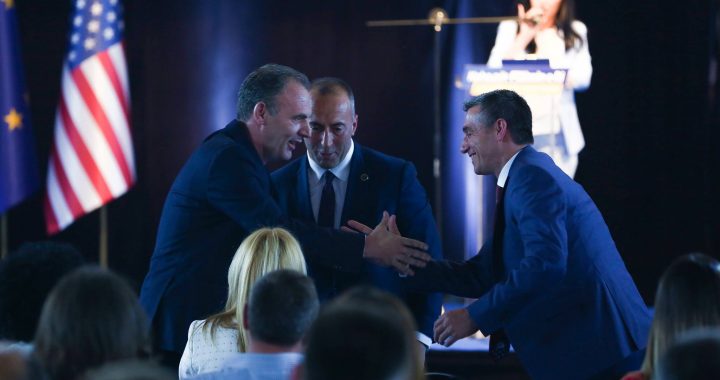 The three leaders of the PAN coalition at the closing rally of the elections. | Photo courtesy of Ramush Haradinaj Facebook.

The consensus on who should be appointed PM is wrong

Kosovo President Hashim Thaci should consult all parties or lists represented in parliament and then give the mandate to whoever manages to assemble a coalition commanding the required majority.

Our huge dictionary was difficult to handle, in fairness, and it did say that oboliskon is a rare form for ‘obelisk.’ Yet my friends evidently had no problem in thinking that the average V-century Athenian owned dozens of obelisks, which are elegant monoliths generally twenty to thirty meters high. (I translated ‘small iron spit’, no less comically.)

The mistake of those who assume that the mandate to form Kosovo’s next government must by law be given to the list that won most votes is similar. For it would be absurd to do so if someone else has greater parliamentary support. In fairness, in 2014 the constitutional court did say that: but the court is unreliable and what it said was wrong.

Demonstrating it is very simple. It is legal stuff, yes, but plain logic is quite enough.

The starting point is Article 95.1 of Kosovo’s constitution (the emphasis is mine):

After elections, the President of the Republic of Kosovo proposes to the Assembly a candidate for Prime Minister, in consultation with the political party or coalition that has won the majority in the Assembly necessary to establish the Government.

So, if party X won 61+ seats in the assembly the solution is obvious: the president should (A) consult X and (B) give the mandate to the person that X suggests.

Note, however, that (B) does not flow from the text of article 95.1, which merely says ‘consultation,’ but from logic: because only X commands enough votes to establish a government, and can therefore vote down any candidate it does not like.

What if nobody won 61+ seats in the assembly? Here the weakness of the drafters of the constitution comes to light, as well as the inadequacy of the process that led to its adoption. Because taken literally Article 95.1 provides no solution: the president would have nobody to consult with, as nobody won the ‘majority’ that is ‘necessary’ to form a government. Only logic can solve the problem, and it does.

Note, first, that under Article 95.4 only two attempts to form the government are allowed, after which parliament must be dissolved. Note also that no special rule is written for the second attempt (article 95.4 says that the second mandate is to be given ‘with the same procedure’, namely in accordance with Article 95.1). Note, finally, that the president must do what is reasonably possible to favor the formation of a government (by virtue of the general principles that the state must remain without a government for as little as possible, and that repeat elections are to be avoided to the extent possible).

The solution is self-evident. The president should consult all parties or lists represented in parliament, to hear their intentions, and should then give the mandate to whoever manages to assemble a coalition commanding the required 61+ majority.*

This is precisely the present case. The three main contenders all have between 30 and 40 votes in the assembly, and the press reports that both Ramush Haradinaj and Albin Kurti are trying to assemble a 61+ alliance. Math tells us that only one of them will succeed; logic tells us that he who succeeds must receive the mandate.

One might retort ‘yes, this may well be right, but the 2014 judgment must nonetheless be respected.’ This would be even more wrong than the judgment itself. The court is subject to the constitution, not vice versa, and its interpretations can always be overturned: this is how in every country jurisprudence evolves and rectifies past mistakes. Note that there is no need for a fresh ruling, moreover: the president can—indeed, must—respect the constitution of his own motion, without previously asking for the court’s permission.

(1) there is no basis in the constitution for the idea that Haradinaj should be granted the mandate for the sole reason that his list won the largest number of votes at the elections: this is, quite simply, an invention of the constitutional court;

(2) should Kurti assemble a 61+ alliance, giving the mandate to Haradinaj would make no sense, as Kurti’s 61+ alliance would vote him down, and it would be a breach of the constitution serious enough to justify the president’s impeachment (because the president would have imposed his own preference over that of the parliament, and would have thus obstructed the formation of the government);

(3) should this happen, and should the second mandate be given to anyone else than Kurti, Kosovo would suffer a soft coup, similar to that prepared in 2014 (the court’s judgment was a preventive go-ahead for the coup, in fact, which became unnecessary when LDK agreed to form a government with PDK).

The rules of the game influence the result, in fact. While that I reconstructed would place all contenders—Haradinaj and Kurti, in this case—on an equal footing, the wrong rule would favour the one (Haradinaj) who is guaranteed the first of the two attempts at forming the government, because at the second attempt any incident—a couple of parliamentarians not turning up, or changing their mind—would be enough to precipitate a repeat election. So those parliamentarians who do not want to run that risk and are undecided between Haradinaj and Kurti will have one good reason to support the former (indeed, favouring PDK was the undeclared rationale of the 2014 judgment).

Hence President Hashim Thaci should say whether he shall follow the wrong rule or the right one, and say it now. He is unlikely to, and can be expected to do whatever his interests will dictate, regardless of law or logic. Yet he should not be helped to do that, especially at such a delicate moment in Kosovo’s political life.

Western diplomats, who were vocal defenders of the constitution on the matter of the army, are reportedly so scared (wrongly) of Kurti that they are likely to keep silent.

Worse, there seems to be a consensus that Haradinaj should receive the mandate no matter what the outcome of the current negotiations is. The reason, presumably, is that those who believe in obelisks or are in bad faith are so many, and so dominant in public discourse, that people have resigned themselves to their absurdities, as though they were a fact of life. This is regrettable, for the forces of continuity—which include inertia and intellectual laziness—should not be given the advantage of seeing their absurdities go unquestioned.

P.S.: On Twitter Agron Bajrami wrote that Thaci is planning to give to the PDK-led alliance also the second mandate to form a government, should they fail at the first round. This would be an even graver coup, of course: but one that is aided by the current consensus on the first mandate, because the constitution says, as I noted above, that the second mandate is to be given ‘with the same procedure’ as the first one. So, not opposing the wrong reading of the constitution would leave one powerless—at least as far as logic and intellectual coherence are concerned—in front of the double coup.

* This implies that the president has a degree of discretion only in circumstances in which nobody won 61+ seats and nobody, after the elections, could assemble a 60+ parliamentary majority. In this case the president may follow his or her own judgment as to who, among all contenders, has the best chance of winning parliament’s confidence.

A shorter version of this article appeared on Koha Ditore on 20 June 2017.