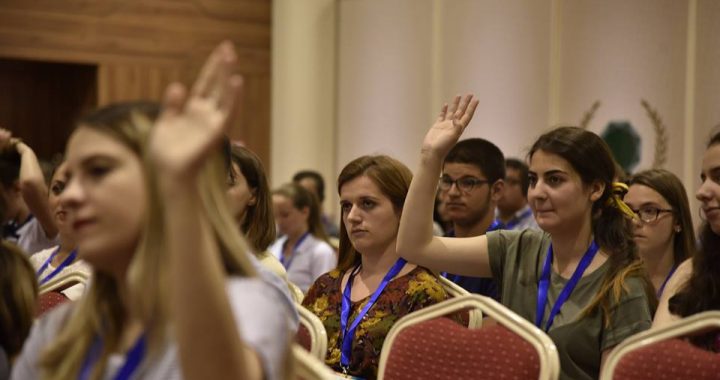 Around 140 young people came together for a two-day event to draft the Kosovo Roadmap on Youth, Peace and Security.

The United Nations Mission in Kosovo organized the first UN Kosovo Youth Assembly on June 28-29, bringing together around 140 young people aged 15-28 years from all over Kosovo to exchange ideas, share concerns, and develop joint recommendations for decision-makers regarding peace processes and conflict resolution. The two-day event was part of the global implementation process of the UN Security Council Resolution 2250 on Youth, Peace and Security.

“There aren’t many opportunities for youth from different communities in Kosovo to get together but we wanted to challenge this and allow the voices of motivated young people to be heard beyond community lines and foster a peaceful and inclusive society,” said UNMIK deputy-Special Representative of the Secretary General Christopher Coleman at the event’s opening session.

The agenda included panels with human rights activists and representatives of civil society and media, as well as workshops on combating stereotypes and prejudices and enhancing critical thinking skills.

The Youth Task Force – a group of 24 young leaders trained on youth, peace and security from UNMIK in the lead up to the Youth Assembly – provided facilitation and support during the drafting of the Kosovo Roadmap on Youth, Peace and Security.

Lorenta Kadriu, 20-year-old from Fushe Kosova, told Prishtina Insight that the event was a great chance to meet people with different backgrounds and experiences who are passionate about creating a better future for everyone in Kosovo.

“As a member of the Youth Task Force, I had to help make sure every activity would go as planned, which was quite stressful but I really enjoyed hearing many different points of view and being challenged to think about common solutions [to challenges facing Kosovo youth on lasting peace and cohesion],” Kadriu said.

The participants presented the Kosovo roadmap, which will be shared with international organizations, local decision-makers and civil society organizations, and included in the SG Progress Study on Youth, Peace and Security. Recommendations included addressing the need for non-formal education in all regional languages, prioritizing youth in municipal and central government budgeting, and improving freedom of movement.

Erika Agaj, 19, and Sokol Zeneli, 22, both from Gjilan, expressed their enthusiasm about this chance to shape how the UN works with young people and provide their views on much-needed improvements in Kosovo’s national institutions.

“There are positive examples of collaboration and solidarity between different ethnic groups today in Kosovo and we need safe spaces to share these stories and build a new narrative together to move forward,” Zeneli said.

The participants were also encouraged to submit inter-community youth project ideas to receive financial support and assistance from UNMIK.

“These project proposals were developed before and during the event, some by groups of participants who met for the first time at the Youth Assembly,” said UNMIK Youth Focal Point Iana Minochkina during the event’s closing remarks. Seven projects received a small grant from UNMIK for implementation.

“The Youth Task Force will continue to be engaged in bringing forward the Kosovo Roadmap on Youth, Peace and Security, and for those who are interested in joining there is still space obviously because we need as much support as we can get to bring these ideas forward and implement these ambitious, yet concrete recommendations,” concluded Minochkina.