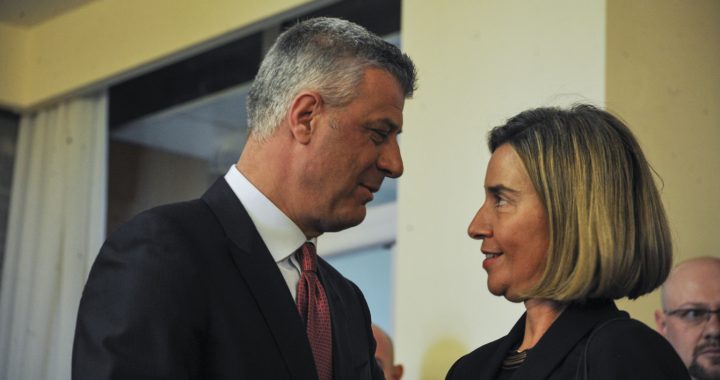 A people pushed around by an autocrat

Hashim Thaci’s negotiations with Aleksandar Vucic are against Kosovo’s interests, because he mandated himself to lead them in a truly autocratic fashion.

“The head” of the Democratic Party of Kosovo, Hashim Thaci–who in the public opinion appears as Kosovo’s president and the representative of “the unity of the people,” which is the biggest joke since the invention of politics–visited Brussels yesterday and met Serbian President Aleksandar Vucic. Before going  to the capital of the European Union, Thaci took to social media to inform that he had a phone call with Vucic, during which he congratulated him on being elected president.

This is not the first call between Thaci and Vucic. While the Serbian president (a former prime minister) does not publicly boast about his phone calls with Thaci, the Kosovar president is adamant in telling the public and the international community that he has once again called his Serbian colleague.

What is Hashim Thaci aiming at with this calling spree? It is very clear that as a politician he has no authority in Kosovo’s society to make possible what is pathetically and fraudulently called “reconciliation between two nations” or “normalization of relations.” How can Hashim Thaci succeed in reconciliation with Serbs, when at least two thirds of the Kosovo Albanian electorate are mad at him, and if they could, would vote him out of the presidency immediately? It is an illusion to believe that reconciliation can be achieved when dictated from the top, without an extensive social, parliamentary and public debate in Kosovo and in Serbia.

For years, the EU has believed that reconciliation can be achieved by “powerful men.” In other words, it is sufficient that they say that reconciliation has been achieved and this will be accepted by nations with a bloody history. Reality has shown the opposite: neither the demarcation with Montenegro nor the Association of Serb-majority Municipalities have managed to be ratified in the Kosovo Assembly.

Before his meeting in Brussels, Thaci said that he would discuss his ideas about how the dialogue should proceed.

“This is only an initial meeting in this new phase of the dialogue, which proves our commitment to the full normalization of neighborly relations with Serbia, which is a key criterion for Kosovo’s membership to the EU and NATO,” wrote Thaci on Facebook.

In a situation in which Kosovo has no Assembly and at a time when political tensions can grow because the coalition around Thaci’s party does not have the numbers to establish a government, Thaci is behaving like an autocrat that is pushing around an entire nation with some vague ideas about normalization of relations with Serbia. Kosovo has been put in this dead end by those MPs that elected a destructive figure like the ‘Commander Snake’ as head of state.

Meanwhile, it is clear that until this point, the results of negotiations have left Kosovo with a footnote disclaimer, Serbia has blocked Kosovo’s membership to many international organizations, and procedures to travel to Serbia continue to be denigrating for Kosovars, who are stripped of all Kosovo state attributes at the border, hiding their passports and removing the car plates of the Republic of Kosovo.

Kosovo’s talks with Federica Mogherini, Catherine Ashton, Robert Cooper, and other EU bureaucrats – all of whom appear tolerant of Serbia –  “produced” the so-called Association of Serb-majority municipalities, a different name for a Republika Srpska in Kosovo. This is not only a claim made by critical voices in Kosovo, but even by serious western media outlets like the Frankfurter Allgemeine Zeitung.

While the new parliament has not been established yet and the new government has not been formed, Thaci has mandated himself, as autocrats are prone to do, and is engaging in negotiations about Kosovo in Brussels. This is intolerable and needs to be opposed not only by political parties, but also by the Kosovo public and civil society (the remaining part that remains unsold to Thaci’s ‘company’ with the acronym PDK).

It is clear that Thaci makes decisions behind the backs of elected MPs whilst ignoring the current government in order to impose himself as a supposed “inevitable factor” of the so-called normalization of relations with Serbia.

However, putting Kosovo on the spot, something that Thaci and his servants have done in the last years, may backfire. On election day, Kosovo citizens massively punished Thaci’s party, precisely because of the arrogance that he demonstrated during his governance, or better said, his reign. In his new dance with Vucic, Thaci is practically alone. Most Kosovo Albanians stand on the other side of the barricade, not because they are against the normalization of relations with Serbia, but against the illusion of normalization, while Belgrade is becoming a factor in the internal decision-making of Kosovo, including the formation of the new government.