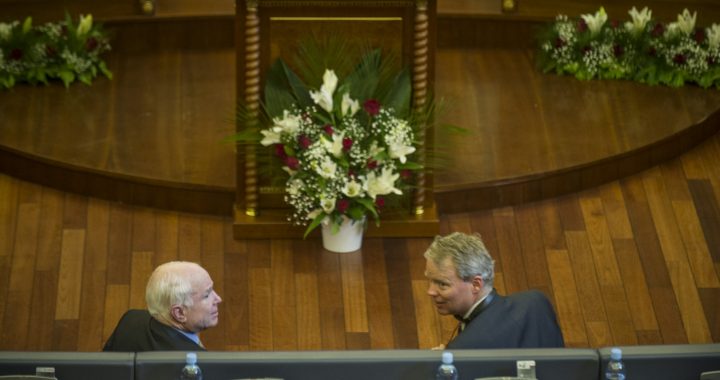 U.S. Senator John McCain visited Kosovo during his Balkan tour to reaffirm America’s commitment to the country and its support for the EU-facilitated dialogue with Serbia.

Stopping in Kosovo after his visit to Montenegro, US Senator John McCain visited the Assembly on Thursday and met with local MPs and political leaders. During his brief speech at the Kosovo Assembly, Senator McCain reaffirmed America’s commitment to Kosovo’s Euro-Atlantic integration.

“I want you to know that members of the U.S. Congress from both parties are fully committed to working to secure peace and prosperity throughout the region. The commitment to Kosovo has been bipartisan from the beginning,” McCain said, referring to anxieties in Kosovo that the Trump administration’s foreign policy would have negative implications for the country.

The Republican Senator’s visit also follows trips to Croatia, Slovenia, Serbia, and Bosnia and Herzegovina. During his Balkan tour, McCain focused on political and military cooperation between the U.S. and the region in fighting ISIS.

As a chairman of the U.S. Senate Committee on Armed Services, McCain has advocated for a strengthened NATO presence in the Western Balkans. A frequent critic of Russian attempts to meddle in the 2016 U.S. Presidential elections, McCain has argued that NATO expansion in the Balkans would help curb Russian efforts to influence European politics.

“If my country ignores this region [it would be to] its own peril,” he said.

“I want to commend Kosovo’s efforts in the fight against terrorism. I believe your country has not received the credit it deserves… Legislation passed by this Assembly has helped to curb foreign fighters in conflict zones.”

McCain was referring to 2014, when Kosovo’s crackdown on alleged terrorists reached its peak with 120 arrests.

Strengthening the rule of law and combating corruption are crucial for Kosovo’s economic growth, McCain said. He also noted that Kosovo should pass the border demarcation deal with Montenegro, and should only transform the Kosovo Security Forces into an army through constitutional changes and with support of the Serb minority.

During Thursday’s visit to Kosovo, as well as Monday’s visit with Serbia’s President-elect, PM Aleksandar Vucic, McCain called for continuation of the Brussels-facilitated dialogue.
“Advancing the EU-facilitated and U.S. supported dialogue is in the interests of Kosovars and Serbs alike. It is vital to Kosovo and Serbia’s shared European future and essential for stability in Southeast Europe.”