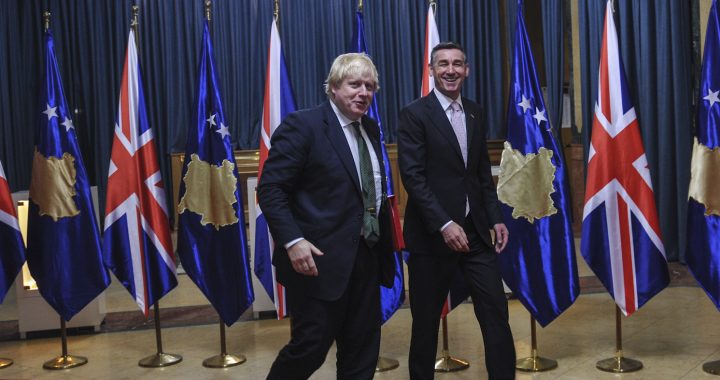 The UK foreign secretary visited Kosovo to discuss Britain’s commitment to the country’s economic development, political and judicial transparency, and “normalization of relations” with Serbia.

British Foreign Secretary Boris Johnson visited Kosovo on Thursday as part of his first official visit to the Balkan region as secretary. Johnson emphasized Britain’s continued support for the Balkans, and prior to his Kosovo visit, he announced in an op-ed that Britain will host the 2018 Western Balkans Summit.

Johnson’s speech delivered at the Kosovo Assembly marked his first return to Kosovo in seventeen years.

“I saw a very different city in those days… I think Kosovo will be a shining example to others of what the world can achieve. I am proud that Britain was one of the first countries to recognize independence in 2008.”

Johnson called on Kosovo politicians to combat nepotism and praised a Memorandum of Understanding signed by the Kosovo government and British Ambassador Ruairi O’Connell in August to fight family and party influences on employment. The agreement set forth British funding for an outsourced private company to lead the process of recruiting senior staff and filling open positions in Kosovo institutions.

Johnson also called for a transparent investigation into the case of a Vetevendosje activist who died in police custody on Saturday.

“I would like to express my condolences to the family of Astrit Dehari, and to call all sides to support a transparent investigation into his death,” he said.

Security and reconciliation with Serbia were also on the foreign secretary’s agenda.

“In the UK, we have a problem with ethnic Albanian crime gangs, and we want to work harder with the region to combat this…we want Kosovo to be a force for peace and stability. That must include achieving a normal relationship with Serbia.”

He ended his address to the Assembly with a look to prospects for strengthened commercial relations between the Britain and Kosovo, saying that Kosovo’s tourism industry is of particular interest.