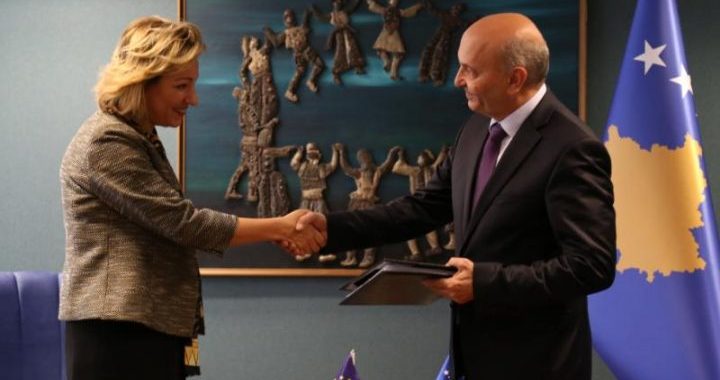 The European Commission’s annual Enlargement Package report for Kosovo cited political polarization and the fight against corruption as major obstacles to the country’s European path.

The report, released on Wednesday, concluded that although some progress has been made towards Kosovo’s implementation of key political and economic reforms, overall, Kosovo’s performance in EU-related reforms is in its ‘early stages.’

“Kosovo has made progress, it has strengthened the fight against corruption, but this does not mean that it will be included in the ‘Schengen white list.’ Kosovo needs to also fulfil the first condition: demarcation,” said the head of the European Union Office in Kosovo, Ambassador Nataliya Apostolova in Prishtina on Wednesday. Apostolova, who was referring to the controversial border demarcation with Montenegro, a key demand in order for Kosovo to receive visa-free travel to the Schengen zone, presented the report to Kosovo Prime Minister Isa Mustafa.

She also added that this year was difficult for Kosovo because of the polarization between parties, a hindrance to progress.

In April this year, Kosovo signed its first contractual relationship with the EU, the Stabilization and Association Agreement, SAA. Wednesday’s report reiterated the need for Kosovo to implement criteria of the SAA and the two remaining requirements for visa liberalization.

In the report, the Commission said polarization between the ruling coalition and the opposition posed a major obstacle to good progress in political criteria.

“Divisions over issues such as the border demarcation agreement with Montenegro and the Dialogue with Serbia dominated Kosovo’s political agenda, leading to a protracted political stalemate,” the report read.

The Commission considers Kosovo to be in the “early stages” of its fight against corruption, organized crime, and in its development of a well-functioning judicial system. Still, the report stated that good progress has been made this year, such as fulfilling the remaining obligations for the establishment of the Specialist Chambers and Specialist Prosecution Office, to try crimes that happened during and after the 1998-99 war.

Regarding regional cooperation, the Commission noted Kosovo’s initiatives in the Berlin Process, particularly in its involvement in establishing a new regional youth center. Despite limited progress this year, the Commission considers that Kosovo is committed to implementing agreements reached through the EU-facilitated dialogue in Brussels. Ongoing construction to open the Mitrovica bridge for all traffic in early 2017, which is a result of EU-backed deals, was considered a major achievement.

The report emphasized the need for Kosovo to better prevent violent extremism and radicalization, saying that Kosovo’s anti-terrorism strategy and action plan are not yet in line with the EU’s security strategy.

“Improved cooperation among intelligence services, especially between countries in the Western Balkans, could help counter the threat of violent extremism and radicalisation. Europol, Interpol and Frontex should be used more as facilitators for this cooperation,” the report said.

On Wednesday, Interpol suspended applications from Kosovo, Palestine, and the Solomon Islands to join the international police organization.