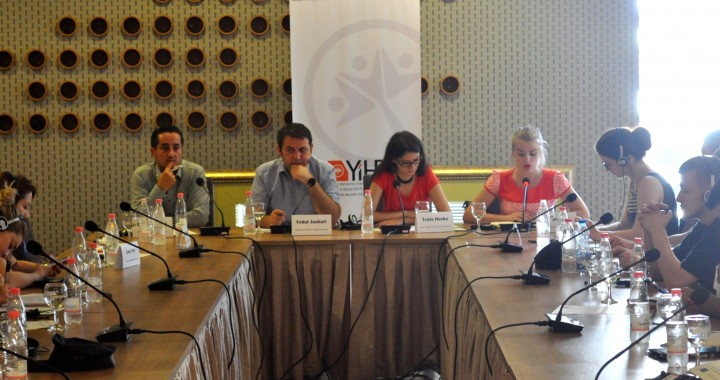 A partnership between Balkan governments and civil society groups will facilitate political and social cooperation between Balkan youth in six countries.

The Regional Office for Youth Cooperation, RYCO, will open in Tirana next January, bringing civil society groups and governments from the so-called ‘Western Balkans six’ together in support of regional cooperation initiatives.

25 years after the beginning of the Yugoslav wars, governments of Kosovo, Serbia, Montenegro, Bosnia and Herzegovina, Macedonia, and Albania will finally sponsor regional youth exchange to foster reconciliation efforts.

“Cooperation between civil society and government is necessary for improving regional cooperation,” said Vedat Jashari, the head of the division for youth policy development in Kosovo’s Ministry of Culture, Youth and Sports.

State PMs have been discussing the possibility for this project since the 2015 Western Balkans Summit in Vienna. In a meeting organized by YIHR on Monday, Jashari confirmed that Prime Minister Isa Mustafa will sign the regional cooperation agreement on July 4 in Paris.

“This will be a [network of] independent bodies established by the governments. Civil society will be involved – we have the experience,” Lazovic said.

Grants will be administered by the RYCO office in Tirana which includes representatives from the six participating countries.

The Kosovo government has pledged 10 per cent of the RYCO budget of two million euros provided by the Balkan states. An extra million will be raised through foreign donors.

During Monday’s meeting, speakers discussed the importance of including education about the Yugoslav wars of the 1990s and ‘dealing with the past’ projects within RYCO’s efforts.

Bekim Blakaj, executive director of the Humanitarian Law Center Kosovo, spoke about the need for a regional effort to establish facts about war crimes and the fates of victims and missing persons.

“New generations cannot have cooperation without establishing facts and dealing with the past,” Blakaj said.

Krenare Gashi, executive director of Kosovo Youth Centers Network, insisted that RYCO will not only be a ‘dealing with the past’ project.

The conference participants also addressed the challenge of including minorities within Kosovo’s RYCO representation.

“RYCO should initiate the first contact and express clear, unwavering readiness to, not just include, but be a true representative of youth in Kosovo,” said Milica Andric, Program Director for the north Mitrovica NGO AKTIV.

Others warned that Kosovo’s role in RYCO should not just be limited to cooperation between Serbs and Albanians. It should be a regional effort and should include groups such as Roma, Ashkali, Egyptian, and LGBTQ youth.

Conference participants emphasized that RYCO should address the need for an inclusive Balkan youth solidarity network.

Some critics claimed that the initiative resembled a “new Yugoslav network.”

“This is one reason Croatia decided to not participate,” Lazovic said. Yet Albania’s inclusion in RYCO, a decision made after riots following the 2014 Serbia-Albania soccer match, extends the youth network beyond the post-Yugoslav space.

Conference participants emphasized that Balkan cooperation and exchange is necessary and useful for EU integration as well.

Still, Lazovic said that though this project has outside influence and support, it should not be seen as an effort imposed by the EU, but rather a grassroots effort.

“The establishment of RYCO is more important than EU integration itself,” Lazovic concluded.