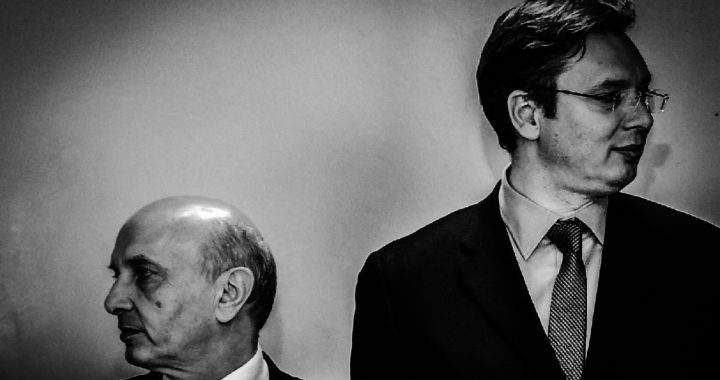 We take a look at how much progress has been made in the six years of negotiations between Kosovo and Serbia- and how much more remains.

On Tuesday morning delegations from Kosovo and Serbia will convene once again under the auspices of the European Union to discuss the damage they did over one weekend to the deals they have spent almost six years negotiating.

In an unprecedented move, Serbia and Kosovo will each bring both their Prime Ministers and Presidents to the EU’s wide conference table. Thousands of kilometers from the new wall in north Mitrovica, the train tracks, and the Mitrovica bridge, whose grand opening, set for Friday, January 20, was de-railed (pun intended), the leaders will have a lot to discuss.

In the dense fog of war rhetoric – and in Prishtina, the actual, hazardous fog – Kosovo and Serbia need to find something positive, and quickly, before more people start writing error-filled blogs about imminent war in the Balkans.

Before the deterioration of relations, the Association/Community of Serb-majority municipalities would have been a top discussion priority.

EU High Representative Federica Mogherini wants to see progress in the implementation, but Kosovo is still fuming over the continued detention of Ramush Haradinaj in France on a Serbian warrant, while Serbia is gearing up for Presidential elections in April – and both the president and the prime minister are still angling to become the nominee.

And anyway, the EU is pretty indebted to Serbia for playing host to some 6,000 refugees and migrants, many of whom are suffering from frostbite and hypothermia in improvised shelters. Plus, according to data published by SIPRI, Serbia is hosting a much higher number of people relative to its population (4.4 per cent) than complainers to its north and west.

Prishtina, meanwhile, has a commission measuring its territory. Another one. And the government has not even issued a tender for stickers necessary to implement the recent agreement on freedom of movement.  The stickers are supposed to cover up the ”RKS” and “SRB” on the left of the plates, since Serbia cannot accept the ‘R’ for Republic, on Kosovo cars.  MPs from Srpska Lista are boycotting and there is no minister of Local self-governance, the key ministry for the creation of the Association/Community of Majority Municipalities.

Where do we stand on implementation? Let’s look at the state of play in brief.  (For a full summary of the deals made between Kosovo and Serbia, see this BIG DEAL report, starting on page 19.)

Let’s start with the good news first. We could use some of it these days.

Scan and transfer of Civil Registry books taken to Serbia during the war– Scanned and returned in full by Serbia in March 2014. But the Kosovo government is still working to incorporate the old documents into its system.

Use of Customs Stamps – They are in use and it is going pretty well, though Prishtina has complained of occasional observances of parallel customs stamps.

Telecom – Ring ring! The wait is almost over. +383 officially became Kosovo’s country code on December 15, though it will take six months to a year to migrate networks and arrange some more technical stuff.

Freedom of Movement –This one’s complicated.

There’s the issue of Integrated Border Management. That’s doing fine, with permanent structures set to be designed this month.

Once the sticky issue of, um stickers, gets resolved, Kosovar cars will be able to drive into Serbia without needing new car plates – a move that not all Kosovars are in favor of, considering that even if the pernicious ‘R’ for “republic” is covered up, anyone can see that the car is registered in Kosovo. But those who still drive with the status-neutral KS license plates were upset of late that they were unable to extend those registrations. Belgrade said it hopes to have the validity of these plates extended. Drivers from northern Kosovo are also frustrated because they are supposed to get Kosovo license plates, but several have told us they have not been able to have their Serbian license transferred to a Kosovo license. Finally, drivers from northern Kosovo say they are willing to get RKS plates for use in Kosovo, but prefer not to use them in Serbia. This concern should be addressed in Brussels.

Barricade on Mitrovica bridge – There was a grand opening ceremony planned for January 20. It has been indefinitely postponed because of the wall – which might, at some point, become a tiered amphitheater?

Police – All of the former members of the Serbian police structures in Kosovo that were going to be integrated have been integrated into the Kosovo Police, who run joint patrols in the north. There was anger during the transition period that the administrative staff were not also hired by the Kosovo government. Now, according to the Ministry for Dialogue, 32 former admin staff have been employed in the Kosovo Civil Registry Agency, KCRA, since September 2016. Another 39 are awaiting placement in the Civil Status Offices.

Civil Protection – Implementation is almost completed. The body is legally shuttered, and 483 of its former employees were offered employment in Kosovo institutions early last year. Not all of the institutions that they are supposed to work in have become fully functional in northern Kosovo yet. Prishtina has complained that the handover of former CP premises to Kosovo institutions is being stalled.

Courts/Justice – As of November, the Kosovo government had completed the integration/recruitment of the Serb judicial staff, 44 judges, 34 prosecutors and 148 administrative staff. Six candidates also took the bar exam.

These negotiations have been held up by several more rounds of negotiations on premises, administrative staff, et cetera. The Mitrovica Basic Court is now functional but Belgrade needs to adopt legislation on pensions and benefits for its former employees.

A polite reminder here that the 19 April 2013 agreement foresaw that all this would be completed by the end of that year. Now that the court is up and running, it should have its work cut out for it: there is a backlog of 8,000 casefiles just waiting to be adjudicated.

Establishment of four northern municipalities – These were established with the November 2013 elections, and according to the Kosovo government, their functioning “continues to be fragile in legal terms…These municipalities yet do not perform most of their duties in accordance with the Kosovo Law, as required by the Brussels First agreement on normalization of relations.”

Successes: they all adopted the 2017 budgets without drama, which happened during the first year of their legal existences. They hold regular meetings and according to Minister Tahiri, they “are showing engagement in several areas of the European agenda including Personal data protection, Consultations and access to public documents, Municipal Energy Efficiency Plan, Waste Management Action Plan, Establishment of one-stop-shops.”

Problems: lack of Kosovo symbols, lack of adherence to procurement procedures, lack of administrative staff, use of Serbian cadaster, and the lack of a census complicates governance.

Association – Prishtina vowed to start working on the statute as soon as Serbia gave the approval for Austria to send a letter to the International Telecommunications Union paving the way for Kosovo to start using +383 country code. Prishtina maintains that the creation of the Association is supposed to occur in tandem with removal of so-called parallel structures. This is one of the most hotly debated topics arising out of the Brussels negotiations and there is plenty of material available. Suffice it to say that it remains unimplemented.

Cadaster – The agreement on return of cadastral documents from Serbia to Kosovo was stalled because of delays in Prishtina adopting the law on a technical agency to compare and verify the cadastral documents returned from Serbia. Belgrade protested the draft law before it was adopted, and property experts complained that there was not a strong enough mechanism in place to make sure decisions of the technical agency were implemented. Kosovo finally adopted the law in April 2016.

Energy – Action plans from 2013, 2014, and agreements from 2015 remain more or less unimplemented. However,  the recent plan of operations agreed in Brussels was to implemented the Telecom agreement, then the Association/Community, and then the energy deal. So it is likely going to take at least a few more years.

Diplomas – In dead last place comes something that would concretely help the lives of young people: mutual recognition of diplomas. Implementation of this agreement, reached in 2011, had stalled for several years until a few moves were made to get the ball rolling again. Though it has been bureaucratically unstuck, it has yet to assist graduates, whose diplomas have been collecting dust for years.

The result of Tuesday’s meeting, which is so high level that apparently only the presidents, prime ministers, and their staff are attending, will be crucial. Mogherini will likely ask both sides to re-commit to the idea of the Dialogue. It may also emerge that the dialogue will continue at the presidential level, or a lopsided presidential-prime ministerial level, with Kosovo President Hashim Thaci inking deals with Serbian PM (and potential presidential candidate) Aleksandar Vucic. While Kosovo’s constitution does not grant the president wide latitude in making international agreements, a President-PM dialogue is not without precedent: in the first years of the dialogue, then-PM Taci and former President Tadic were the ones at the negotiating table.

Six years of high-level negotiations between Belgrade and Prishtina have led to some concrete improvements and shown that a little good will can go a long way. But the events over the last couple of weeks show that without a stronger investment in dialogue between ordinary people, especially young Kosovar Albanians and young Serbs — what took six years to build can still come crashing down like a house of cards. 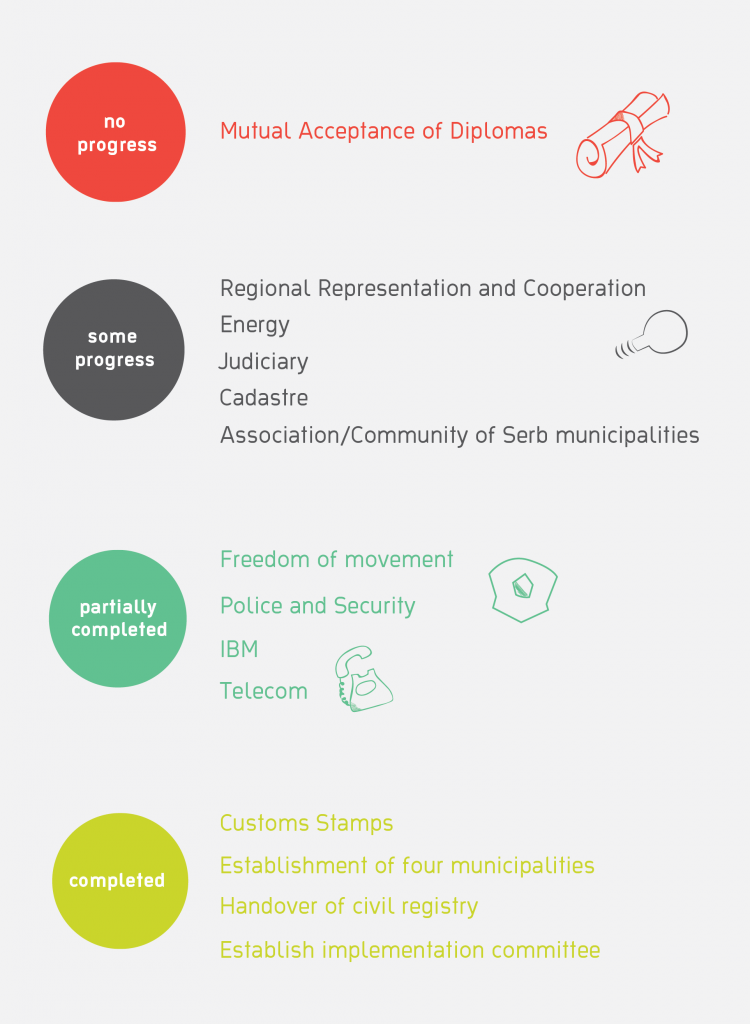