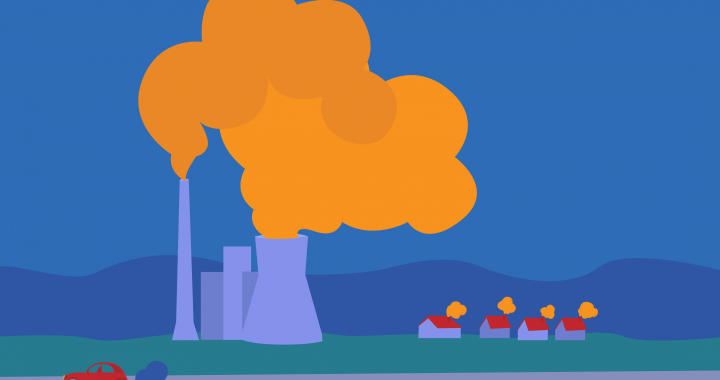 These days, the capital’s air is unhealthy to breathe 70 per cent of the time, which costs up to tens of million euros annually. It is up to the government, the municipality, and every citizen to fix it.

As we were having fun celebrating the arrival of a New Year, another event went unnoticed in the capital – a new air pollution record was set in Prishtina. Unfortunately, it turned out last week that this sad record was not only an “anomaly” due to the extraordinary amount of firework smoke spread in Prishtina’s sky. According to the measures of air quality provided by the US Environmental Protection Agency, EPA, the concentration of PM2.5 – for particulate matter smaller than 2.5 microns – reached its highest hourly value since the monitoring station was installed at the US Embassy in March 2016.

What is going on in the air?

On January 12, another record was broken, definitely making this beginning of the year especially miserable: the 24-hour average concentration of micro particles reached “Hazardous” levels for the first time. This is the highest category of pollution determined by the EPA’s Air Quality Index. The US agency warns that “the entire population is more likely to be affected.”

Unfortunately, this was not an isolated occurrence. The quality of air observed during the first two weeks of 2017 was already quite alarming regarding micro-particles in the air on an average 24-hour period. Data provided by the EPA revealed that Prishtina’s air was “Unhealthy” 50 per cent of the time and “Very Unhealthy” 20 per cent of the time. Worse still, 5 per cent of the time, air quality measures reached the most worrying level in the EPA categorisation: “Hazardous.”

Ultimately, the quality of air never had a chance to reach a “Good” level defined during a 24 hour period.

Remember that in 2013, the World Bank estimated that every year, outdoor air pollution in Kosovo causes “852 premature deaths, 318 new cases of chronic bronchitis, 605 hospital admissions and 11,900 emergency visits,” and said that the annual financial cost amounts to “between 38 million to 163 million euros.”

What is happening on the ground?

In December 2016, the already skyrocketing levels of air pollution prompted Prishtina citizens to take to the streets in protest, under the initiative of the movement “merr frymë” – “breathe” in English.

A few days earlier, a press release from the National Institute of Public Health of Kosova, NIPH, raised alarm about the worrying quality of air in Prishtina, providing recommendations to the population and proposing measures to urge the relevant authorities to carry out an emergency plan. The NIPH also stated that “if these urgent measures [were] not taken, there will be adverse effects on human health and increased mortality from all causes, especially from cardiovascular and respiratory diseases.” It is worth highlighting that the values the NIPH was referring to were at the time almost three times lower than those we faced in the past two weeks.

In response, the government of Kosovo, through the Ministry of Environment and Spatial planning, MESP, published a “Plan of measures for improving the quality of air and environment condition” on December 21 for all of Kosovo. Among the 26 short, mid and long term measures proposed by the Ministry, one looks quite obvious: “To implement the measures related to the Strategy on Air Quality.” Already, over three years have gone by since this Strategy on Air Quality 2013-2022 has been adopted.

Prishtina Municipality’s plan to reduce air pollution in the city was already in preparation at the time and was published a couple of days after MESP’s plan.

The document claims that the main factors for Prishtina’s air pollution are the Obilic Power plants, importation of old vehicles, the quality of imported oil with high amounts of sulphur, coal and wood as sources of household heating without the option for other alternative sources, and widespread dirt in concreted areas.

Six short-term measures are either being implemented or expected to be put in place soon by municipal authorities:

The Municipality initially envisaged a seventh short-term measure: alternate traffic circulation, through a system restricting the access of cars in the city on high pollution days, determined by whether their license plate ends in an even or odd number. This traffic regulating system is already being used in some European countries such as Italy, Greece, and France during air pollution peaks, sometimes for decades. Similar measures aiming to reduce the amount of motor vehicles in city centres have been already taken in several other European cities such as London, Budapest, Oslo, Stockholm, Lisbon, Berlin, et cetera. Unfortunately, Prishtina’s municipal authorities stated that the implementation of this measure does not fall within its competences, adding that the availability of traffic policemen would not allow it anyway.

As a compromise, the municipality is considering closing some roads. Authorities say that while the decision “will cause traffic delays, these measures are necessary to preserve the health of citizens.” The municipality also requires citizen involvement, calling on Prishtinalis to reduce the use of cars and notify municipal authorities of polluting businesses and households by phone at 080012233, 080012244 or 080012255.

In its public statement, Prishtina’s municipality also argues that they have already started to implement long-term measures to mitigate air pollution in the city: 3,000 trees have been planted in the past 2 years, 51 buses with gas emissions in accordance with European standards have been purchased, and the area of protected lands in Gërmia is going to be expanded by 2,000 hectares. They also claim that the plan to provide stable and affordable heating to approximately 60,000 people reduced the need to use alternative forms of heating – wood and coal burning – and enabled a 20 per cent decrease in electricity consumption in 2016. They expect to extend this electricity provision to 30,000 other inhabitants in 2017.

The current situation regarding air pollution in Prishtina ultimately demonstrates that, even if helpful, these measures are not sufficient on their own.

The increasing concentration of micro-particles in the air during the past few months indeed suggests that this situation, although extreme, will apparently not constitute an isolated case over the winter. Prishtina’s air was, on a 24-hour average, either “Unhealthy” or “Very Unhealthy” 4 per cent of the time in October, 45 per cent in November, and hit 70 per cent in December before breaking all records in 2017. It is consequently highly desirable for the health of Prishtinalis – and more generally, of all Kosovars – to effectively implement all the measures recently submitted by local and governmental institutions as soon as possible, in order to address air pollution and therefore citizens’ concerns.